Book Report: I Am Charlotte Simmons by Tom Wolfe 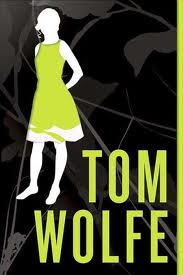 It’s difficult to talk about I am Charlotte Simmons without addressing the fact that this book is written by an almost 80 year old man (at the time) about college student. And all that entails.

Look, I understand it’s not a requirement that the person writing the book has something in common with the characters. J.K. Rowling is not a wizard. (As far as we know) Robert Kirkman has never lived through a zombie apocalypse. Stephanie Meyer has probably never loved a real sparkly vampire. And while I’m sure many a writer has put on a Batman mask after writing about him, most of them were probably terrible at it.

So why do I start out the book report of I am Charlotte Simmons by pointing out that a book written about a young girl’s experiences in the first semester and a half in college and the three men (sorta) drawn to her was written by an almost 80 year old man. Because it’s blatantly obvious while reading it. It is so obvious, that Tom Wolfe “won” an award for some of the... we’ll say dubious writing of the sex scenes (We say it like that because he can win awards for bad writing, Tom Wolfe is one of the most famous writers of the 20th century, and I have a blog), and had there been an equivalent for slang and movie references (kids to love their Simpsons), he’d probably win that, too.

Now that this is out of the way... it’s actually a really good book, even with the silly slang and the terrible, terrible sex scenes.

I am Charlotte Simmons is about a young sheltered but gifted girl who is starting college at a prestigious fictional university named Dupont. While there she meets up with Hoyt, a stereotypical frat boy that sets his sights on her for reasons that aren’t very clear; Adam Gellin who fancies himself the knight in shining armor/intelligent guy/opposite of Hoyt (and isn’t, but we’ll get to that in a minute); and Jojo, a basketball player who decides to turn his life around when Charlotte shows him that he’s smarter than he thinks he is. There are several sub-plots, such as Hoyt discovering a sex scandal with a future Presidential candidate; Adam wanting to publish a story about it; and Adam writing a paper for Jojo. Everything sort of comes together, pretty much as you’d expect.

The thing about the novel is that despite it’s pretty obvious views of sex, college life, and few subtle jabs at class, it also has an interesting take on superiority. Hoyt obviously thinks he’s superior in a way because not only is he in a prestigious fraternity, but because he generally gets what he wants. Adam thinks he’s superior because he believes he’s smarter than everyone else, and is thus better than everyone else. Even Charlotte thinks she’s superior because she’s not like all of these sex-obsessed teenagers that surround her. In fact the only one who’s not running around, trying to be superior is Jojo. He just wants to play basketball and just try to do his best in school.

I almost find it difficult to explain exactly what it was I enjoyed about this book so much. Tom Wolfe has created an interesting world of Dupont. I have always enjoyed books that sort of “own” the world they create. Dupont has it’s history... you get the impression that you could visit it just on a weekend or go check out a game... go go, Jojo! (That makes a lot of sense if you read the book.) The characters themselves are fully realized. These are people, not just characters that you read about for the semester and a half. There’s even a cool little reference to one of Mr. Wolfe’s previous books, Bonfire of the Vanities. Yeah. I enjoyed spending time at Dupont, even with the painful sex scenes.

Unfortunately, Mr. Wolfe seems to take his role as writing about college students a little to seriously towards the end. It really seems like at some point he looked at his watch and said, “Oh, man... I’ve got a book to turn in!”. The ending was that abrupt. And a little happier than some of the characters deserved. I just really disliked the way the ending just sort of... ended. While he painstakingly covered almost every detail in a semester for these students, he jumps ahead and then seems to stop the story. Not really sure if any of these characters really got the point of what he was trying to say.

But as mentioned, despite it’s flaws, this is really a book you need to check out for yourself.

Email ThisBlogThis!Share to TwitterShare to FacebookShare to Pinterest
Labels: Book report, I am Charlotte Simmons