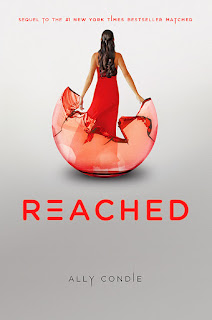 Whelp, I’ve Reached the end of the Matched Trilogy.

Ok, I got that out of my system.

I honestly have to say that I don’ think I’ve enjoyed the wrap-up to a trilogy so much in anything I’ve ever read. For those who haven’t read it, The Matched Trilogy is about a “near-perfect” society (named “Society”... one of the things outlawed was creativity... it’s a nice little touch that runs through the books) where just about everything is planned out for you. The book series starts in Matched, when our protagonist Cassia is matched first with Ky, an Anomaly who shouldn’t be in the matching pool, then with Xander, her lifelong friend. (and I reviewed it here, and the writer, Ally Condie, said nice things about me.) Then it continues in Crossed, (that I didn’t review) where Cassia is searching for Ky who’s been sent away, and then as they search for the rebellion known as the Rising. (Again... creativity itself has been outlawed.)

Reached finishes out the trilogy, as Ky, Xander, and Cassia work within the Rising to bring down Society with a Plague. Of course, then the plague mutates, then the Rising and the Society are both screwed. During all of this, Cassia attempts to bring back creativity itself, Xander deals with his love for Cassia, and Ky... well, Ky spends most of his time trying not to die from the mutation in the plague. He sort of gets the short end of the stick on this one. I feel a little bad for him, but we’ll get to him in a minute.

I will admit that these books do use a technique I’m not fond of, and that’s first person switching narrator. One chapter is told by Cassia, another by Xander, and another by Ky, alternating to tell us different points of the Rising, the Society, and the new world that Cassia is trying to build with poems, art, songs... again, important stuff. So it should say something that this book is still amazing, and managed to blow me away, not with just the writing but the revelations, keep managing to be thrown at you like darts at a cow. One chapter, late in the book, when Ky has really started to be affected by the plague, is just his heading and a blank page, and it nearly broke my heart.

There’s a great underlying theme here, too about immortality. The Society is constantly trying to beat death (Raging against the dying of the light, if it were...) through science, trying to find ways to bring people back to life. Cassia manages to start a Gallery with different types of art. This theme keeps coming back around... what is our legacy? How can we live forever? Cassia seems to understand early on that we do want to hang onto our loved ones (she carries around a tube with her Grandfather’s DNA in it for a bit, later to give it a proper burial) but it’s not the physical act of being brought back to life, but we can exist for a long time through our actions. That’s quite on the nose, yes, but you have to understand how excited I was when my brain finally grasped it.

The characters, as usual, are amazing. I really like the renewed focus on Xander, who it turns out was part of the Rising the whole time. He wasn’t around much in the last book, as Ally Condie chose to focus more on the Cassia/Ky romance. Too often in young adult novels there’s a clear divide of who should be together by making one of the characters weaker... the writer doesn’t do that. Xander is a powerful, conflicted character who clearly loves Cassia. He loves her enough to let her go away. I also really liked the fact that Ky clearly didn’t trust the Rising, but only joined it as an outlet to allow him to end up with Cassia. (Oh, it’s not that big of a spoiler, you big babies. It’s telegraphed in the first book.)

There were only a few things I didn’t really enjoy. I felt the mythic Pilot, the leader of the Rising was a little underdeveloped, and a bit of a jerk. I didn’t really get a “Hey let’s follow this guy in defying the Society” vibe from him. Also, I didn’t like how Cassia’s Gallery quickly disappeared from the story. I get why it had to happen, doesn’t mean I have to like it. There’s also one character that disappears after affecting the plot so much in the second book, and I don’t like the way she was just unceremoniously dumped from the book.

These are minor quibbles, though, and not to take away from a book series that was extremely enjoyable. The twists are incredible... and the writing is amazing. These books are overlooked for the flashier Hunger Games, but in a way I enjoyed them a lot more. They’re subtler. They take more time to build, and the symbolism is just incredible. Once again, we do have an incredible focus on color. You should be reading this book.

One final thing before I wrap up... the central mystery of the books, “How did Ky get into the matching pool in the first book” is wrapped up incredibly. It’s the first time I read or saw a twist that I didn’t see coming, but made complete sense in retrospect. It’s discussed repeatedly, and I can’t believe I didn’t realize it earlier. I really want to go back and re-read a few things, just so I can pick up on the clues.

And I’m looking forward to it.
Posted by Bad Shakespeare at 3:30 AM