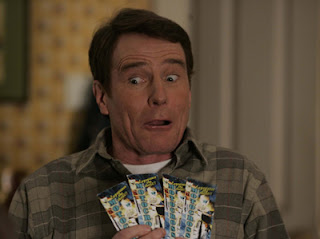 Breaking Bad is a writer’s dream. There’s so much to discuss an analyze with this show, probably on par with Lost. (Fun fact: I know it’s trendy to complain about the ending of Lost. I know that a show that heavily relied on religious themes ending in a church might be scary to some, but before watching it, you should probably go back and watch it again.) Breaking Bad is so much fun to dissect, to look at little clues from one episode to the next, to see where certain breaking points are, to watch as Skyler screams “Shut up!” to Marie at the top of her lungs... I mean, there’s some awesome, awesome stuff at work here.

But there’s one thing that I want to address, and I know for a fact that it affected many of you. Let’s face it... early advertisements for this show were... interesting. They boiled down to this: Malcolm’s Dad in his underwear pointing a gun at you, and some vague chemistry symbols making up the show’s title. If you say that you thought the show was going to achieve greatness from that one little moment, you’re a filthy rotten liar. But I want to focus on a specific part of that... the “Malcolm’s Dad” part of it.

Bryan Cranston is known probably for two other parts beyond that of Walter White: Tim Watley, the religious joke making dentist that would occasionally bothering Jerry Seinfeld, and that of the dad on Malcolm in the Middle. Well, when I finished Breaking Bad the first time and was looking for something to binge on Netflix, I decided to go back and look at the role that sort of kept me away from Breaking Bad, and that was Malcolm in the Middle. Then I found that he was the best thing about the show.

Let’s face it, Malcolm (what I’m calling it from this point on) is a pretty dark show. The mother is borderline abusive, most of the children would have been in prison years ago, and there’s an entire episode dedicated to how Hal (Bryan Cranston’s character) gathering an army of giant men to do his bidding. (Not a joke.) Don’t get me wrong, it has some comedy moments, but this is probably one of the darkest shows to be listed as “comedy” out there. Don’t believe me? Pop in one episode. Just one. I’ll wait.

Back? Good. I see you can see what I mean now.

However, Hal was a great proto-Walter White role, and especially in the later seasons when Frankie Muniz was off trying to break into film roles (his role in the Syfy movie Last Vegas, which is known as the Syfy movie coming out this summer that’s not Sharknado is evidence of how well that worked out for him.) and the show started to focus on the other characters, and they realized that Bryan Cranston was probably the best thing on that show. You can always get the impression that he planned out every little thing that Hal did... how he was going to hold (or wave randomly) his hands in a certain scene... how he was going to inflect a certain word... even how he’d react in the background of something.

One of my famous “Hal vs. Walter White” moments comes later in the series when it turns out that Lois is pregnant again. Everyone is freaking out, and Hal calming looks at her, and says that everything is going to be ok, then calmly walks out of the scene, walks to his car, and starts freaking out, big time. Throwing a temper tantrum that would make seven year olds envious. It’s really one of the standout moments to me. It’s just such a switch it’s incredible. The follow up to that is a little scene that just really sells it for me. After losing his job, the family goes $26,000 into debt, then it briefly rises to $28,000 into debt, then they can proudly announce that they’re back to $26,000. Bryan Cranston looks up and says, “Look out, we’re back.” It’s just a fantastic moment.

It’s filled with moments like that. When he’s dressing to take one of his son’s to jail. There’s an episode dedicated to telling two different storylines: One if he takes his kids bowling, and one if his wife takes his kids bowling... just look at the little moments where he’s going for a perfect game. Or the dance off episode. Or the Burning Man episode. So many little moments that are just too perfect and bring us a proto-Walter White, making the darkness that enjoyable.

My point to this trip down to memory lane of a television show that managed to wrangle two Young Frankenstein actors using their German accents, is that I, like a lot of people, wondered how Bryan Cranston was able to pull off this character. The thing we forgot, is that sometimes the funniest characters herald the darkest moments of anything. Despite the fact that Breaking Bad is a dark show, and not something that would be considered a “comedy” (although the first few episodes could be considered a fish out of water comedy...) it can take an actor who’s able to make you laugh at some dark, dark moments to pull off a show like this. The thing is, even if they came back and told me that someone else was up for the role of Walter White, I don’t think I could imagine anyone else playing this part as well as Bryan Cranston. It really makes me sad that the first thing to keep me out of this show is the thing that has me invested so much. It’s sad that the thing that really made me nervous about getting into a show like this is the thing that sells it.

Make no mistake: This show hinges on Bryan Cranston. It hinges on those little moments that were perfected in his role as Hal that made the dark show so enjoyable. It hinges on the those little moments when Hal would take something exceedingly dark and make it light. It’s those proto-Walter White moments that, despite the fact that Walter White is a bad, bad man, makes you stand behind him and say, “yes. I get why he did that. Let’s keep watching him, now.”
Posted by Bad Shakespeare at 4:00 AM