This Halloween, Have a Piece of Pie... On Shakespeare

As mentioned, it’s that scary time of year, and this is the scariest day in all the scariest times of year: Halloween. Whether you’re planing on going out trick or treating, staying in and eating the candy meant for the trick or treaters, or making sure that everyone on your social media feeds know that this “candy” thing contains sugar, and sugar will eventually destroy all life everywhere, it’s important that you enjoy yourself today. (Seriously, though, if you hand out raisins I fully endorse the egging of your house every day until next Halloween.) Also Happy Halloween to all of you who are going to complain about people’s costumes.

Halloween can be a scary day, not just because of the sheer number of takes you’ll see on the “Wrecking Ball” costume or Miley Cyrus Twerking, but because there is a big push on what to do for this day. Do you go out? Do you stay in? What do you dress up as? (Please.... no more “Wrecking Ball” or Miley Cyrus Twerking Parodies... think of the pictures in about two years.) But what’s most important is: What do you watch?

But what you you literary types out there? The ones who would like to watch a movie, but still maintain an air of knowing that you’re learning something? Bad Shakespeare is here to help! There are a ton of great movies out their based on literature that are perfect for this time of year. Specifically, movies based on the works of the bard! (I was going to do all literature, but my list was mostly Frankenstein and Edgar Allen Poe. Seriously, read up his stuff. The man was insane.) Presented below is a list of the BEST Shakespearean adaptations for Halloween. 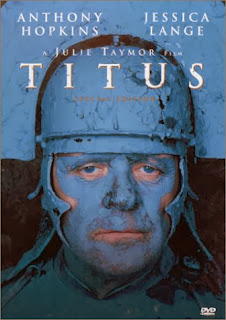 First up is Titus Andronicus. No, not the band that transcends genre but is classified as “Punk.” Here we’re talking about one of the first plays written by William Shakespeare, and definitely one of the first tragedies. It’s about a General who’s caught up in a cycle of revenge and honor with the Queen of the Goths.  (It’s got generals, goths, pies... you’ll love it!) This particular version stars Anthony Hopkins and isn’t really set in any time period, but is one of the most disturbing movies I’ve ever seen. It’s also one of the most violent plays Shakespeare ever wrote, and is probably closer to Saw than it is to what you think of as Shakespeare. This one will give you nightmares.

Next up is the Scottish Play, Macbeth, and I’m including two versions. One is Patrick Stewart’s quite excellent adaptation that moves most of the drama to a war torn country (that’s sort of the standard for William Shakespeare adaptations.) I’m also including an audio version of Alan Cumming one man adaptation, because when he’s not playing Nightcrawler, he can be a disturbing individual. I mean, just listen to it. Anyway, you know what it’s about, blah, blah, blah, witches, blah, blah, blah killing, blah, blah, blah cursed. The whole play itself is cursed. It’s like watching the Ring, only there’s no timeline on when someone is going to drag you down into a well. Or your play flops. I forget what’s supposed to happen here. 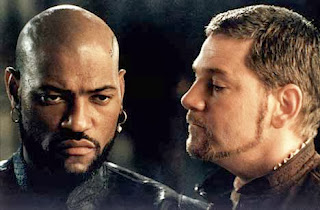 Next up: Any version of Othello or Hamlet. Except O. Which was terrible. They actually included a line that said, "I thought Shakespeare wrote movies." Just.... really? And Julie Stiles, you're supposed to be... you know what, I just need a minute.

Moving on. You want your horror psychological? How about we drive people mad. Othello is driven mad by his supposed friend, Iago, until he goes on a killing spree that involves killing himself. Iago is one of the rare exceptions to most of Shakespeare’s works in that one of the major villains meets his fate by being arrested, not by meeting the business end of a blade, or poison. He almost gets away with it! Hamlet is driven mad by himself, and possibly ghosts. But mostly himself. I’m throwing the Kenneth Branagh versions of both, because he did a good job. And plus, one of them has Neo in it. Neo, people. Neo.

Finally, Much Ado About Nothing. Why am I including a comedy on this list? Think about how absolutely disturbing this movie is. Yes, there’s the lighthearted romantic comedy between Beatrice and Benedict... oh, young love. They’ll get together, right? Yes, they will, after she asked Benedict to kill his best friend. Why? Because he’s so quick to anger that he throws away his true love once he sees her “cheating”. In a plot that is put together for no real reason or motive. Then when the plot is uncovered, does everyone laugh? No, no they fake Hero’s death. They make the young lover think that the love of his life kills herself. Seriously, people, this is some messed up The Game type stuff going around here. Yes, it ends happy because Shakespeare didn’t feel like having anyone eaten off stage by a bear. People are crazy.

Enjoy your Halloween, everybody!
Posted by Bad Shakespeare at 2:36 PM

Email ThisBlogThis!Share to TwitterShare to FacebookShare to Pinterest
Labels: Halloween, Hamlet, Macbeth, Much Ado About Nothing, Othello, Shakespeare