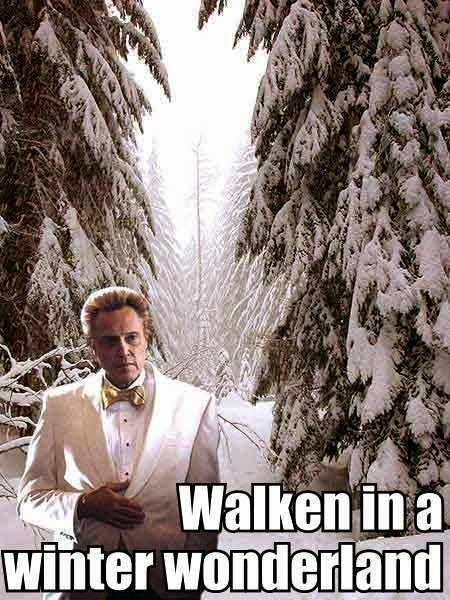 My father was in the military, so I have had the pleasure of living almost all over the world. I was born in overseas (but eligible to run for President unlike that faker who won’t show his birth certificate, Chester Arthur. Pffft. Canadian.) I’ve lived in a ton of places, that had a ton of varied climates that continue to make up the rich tapestry of what we generously call an atmosphere. (Not like the atmosphere in Venus. Now that’s the money atmosphere, although we’d all die from lack of breathable gasses.)

I’ve chosen to live where I want to live because it’s a nice area. For starters, we have actual seasons... things get cold, then they get warm again, then people use the temperature one date or another to either prove or disprove global warming, then we all complain about the weather, then the cycle repeats. It’s a nice cycle. One I’ve gotten used to, and one that is thankfully devoid of a lot of extreme weather. There was one year we got a foot of snow. We’ll get hit with the random hurricane every couple of years. But nothing too extreme.

Which is why it’s kind of annoying when we get five inches of snow, everything shuts down and I hear, “Wow, back in Chicago we’d wouldn’t shut down for that kind of weather!” I then shake my head, and try to remind them that I don’t live in Chicago because I don’t want to deal with what amounts to a colder version of New York.

That always seems to happen. Recently, the weather in California dipped down to the low 60’s (It was almost 50, people) and one of the Meteorologists was shown wearing a ski parka. The nation had a laugh, then went back to seeing if Miley Cyrus did anything that could be construed as controversial so we could complain.

What everyone tended to forget was that Meteorologist lived in California, where the weather is nice and the beaches are made of candy, so I’m told. She wanted to live in an area that was warm most of the year, so yes, the weather, which was normally in the 70’s took a dip down to the 50’s, yes. It was going to seem cold.

The problem seems to be the smug superiority of those that seem to think that every area is equipped to handle the extreme weather they get all the time. Yes, Michigan, we get that your winter starts in May and ends in April, but the thing is, not every area lives in Michigan where it snows so much you have evolved to be even whiter as to hide easy from your natural predators. I currently live in an area where a light rain can tie up traffic for several hours, if not days.

My personal favorite tale of comparing weather to weather came right after Hurricane Katrina, when everyone of course was being extra sensitive and I got the pleasure of reading how a large snow storm that mildly inconvenienced a few people that were used to dealing with large snow storms (one hit at least twice a winter) with a hurricane the likes of which hadn’t hit that particular area in a hundred years. The article, clearly written by someone who knew, laughed and revealed at the idea that a flood - just mere water, according to the writer who didn’t have their head shoved up somewhere I’m too polite to mention (their ass, for people I’m not polite to) could somehow not be as manageable as their yearly big snow storm. I’m half surprised why he didn’t mention all of New Orleans just getting in their cars and plowing up everything.

Here’s the thing, the planet is big, and has a lot of different regions. That’s basic science 101. (Which some people are trying to get removed from schools, but that’s a completely different post.) If you think you’re tough and every region is pretty much the same, take a minute and Google “Spiders in Australia.” It’s ok. I’ll wait for you to Google the image, and then for you to finish screaming.

Just because you live in an area that can “handle a ton of snow” or “would have to cancel school every day if we got as little snow as you” doesn’t mean the rest of us live in such a utopia. In fact, we don’t live in that area probably for that reason. In my case, I choose to live in an area that used to be a swamp and gets close to 99% humidity on the nice days in the summer. Weather you’d be complaining about in a few minutes, and I know you complain about it because I’ve seen you scurrying around the Metro, absorbing those last precious moments of what The Washington Area Metro Transit Authority generously calls “air conditioning”, usually by standing in front of an escalator or a turnstile so no one can get through, before stepping out into the sweltering heat so you can complain about it.

The fact is, when you whine and complain that things are shut down because of the weather, you’re making a false comparison. You’re trying to compare where you live to another area that’s different. Also, you’re looking stupid, because sure your area is fine and can deal with it. Some areas can’t. My area in particular can barely handle a sunny nice day. Don’t make us get out on the road when there is ice. There are still people that put on their four way flashers when it’s overcast. Asking them to do more might break them.

So this is a Bad Shakespeare PSA, reminding everyone that once again that speaking requires two separate acts. The first is thinking, followed by speaking.
Posted by Bad Shakespeare at 4:00 AM

Email ThisBlogThis!Share to TwitterShare to FacebookShare to Pinterest
Labels: Weather