Let's all Freak Out about Spoilers Again 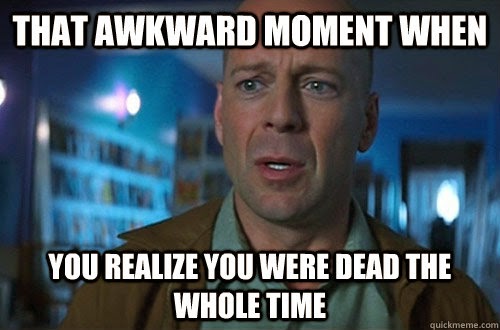 Please note, the following post contains spoilers. Spoilers for things that came out years ago and you should have seen, but also a few spoilers for a show the most recent episode of the Walking Dead. Also, I’ll be discussing the fact that spoilers were released for the last episode of Sons of Anarchy, but I won’t reveal them here as the episode hasn’t aired at the time of this writing, and I’m genuinely afraid of what Kurt Sutter might do if I do release those spoilers. He had one character stick a fork in another character, and that was one of the nicer deaths on the show. No, thank you.

Ah, Spoilers. It’s time to discuss them again, because as a culture our spoiler-phobia has reached brand new levels as two highly popular shows accidentally released spoilers for their upcoming shocking endings. We’ve discussed spoilers before here on Bad Shakespeare, particularly surrounding the last Star Trek movie Star Trek (I’m putting a colon here because it needs one no matter how arty you get) : Into Darkness. Unless the title referred to the actual act of trekking into darkness, but that makes no sense.

For those who don’t remember or just started reading this blog (Welcome) I talked about how there was a ton of secrecy surrounding the mysterious character that very British Man Benedict Cumberbatch was playing, and that it was a twist that he was playing Khan, who up until this point had been played by very Spanish Ricardo Montalbán, and when you create an alternate timeline, duh, the Indian Character played by a Spanish person becomes British, duh.

There was a lot of secrecy surrounding his role, and any mention of it outside the film set was dubbed a, “spoiler” despite the fact that the twist has no real bearing on the plot, and the bigger twist is that the Admiral played by Robocop was the real bad guy. Benedict Cumberbatch playing Khan is a cool thing, but it’s not really a “spoiler” so much as a “plot point” that will “make me want to see the movie.”

That takes to today’s topic about spoilers, mostly that AMC, the channel of Breaking Bad, The Walking Dead, and the idea that you can run six episodes then wait a year to run six more and call that a “Season” accidentally released a picture of Darryl carrying zombie fodder/Greene Daughter/only made it this long because the writers forgot about her Beth Greene, announcing that she was the big casualty for the mid-season finale, when someone had to die (dun dun dun) and they’d already killed off Bob earlier in the season.

Naturally, people went up in arms because it spoiled the ending. It didn’t say how or why Beth died, just that she did. Internet comments ranged from empty threats to never watch the show again to death threats to racial slurs thrown at the previous commenters. Because that’s what we do now. Whoever decided that all internet commenting should be anonymous doesn’t really have a special place in Hell per se, but I think when they get to Heaven they get the room on the end where the remote doesn’t have any batteries and their alarm doesn’t wake them up in time to go to any of the cool concerts we get to go to.

But I have to ask… does that spoiler really ruin anything, as people claim it does?

The Walking Dead has a track record of killing off people randomly, even if it doesn’t follow the comic. And it doesn’t matter if they’re the kindly old man who dispenses advice, or an innocent girl with a rainbow T-Shirt on. People die. Beth had been taken by a mysterious group that I guess was running low on weak blondes they can boss around, and her death was kinda shocking, I guess, but I tuned in to see what happened.

We live in a day and age when it’s kind of easy to get spoilers. Some stuff is closely guarded, but pictures from the set or “insider information” gets out pretty easily. There’s a story of Kevin Smith, back when he was filming Jersey Girl starring pre-Batmaned Ben Affleck, back when he was dating Jennifer Lopez (I think we tend to forget this. We need to remember to make sure nothing like it happens again.) and they wanted to hide the fact that J-Lo dies halfway through the opening of the movie, so they had her on set, “filming” scenes… it was still ruined by someone who didn’t want people to think she was going to be in the movie still.

The “shock ending” of the film shouldn’t be the end-all/be-all of the movie itself. In fact, if you rely solely on the shock ending and you don’t’ care much about the characters or anything like that, then you have a pretty crappy movie or TV Show. Beth dying is an idea. Why she dies, or what leads to that death, or why Daryl is carrying her when they aren’t in the same scene together… that’s important.

This also happened last week when a book came out early that revealed the “shocking” ending of Sons of Anarchy. Yes. I read it. Mostly because I love the show and I enjoy talking about it, so I wanted to know what was going to happen. I’m terrible like that. I won’t reveal the shocking contents, but it pretty much sums up something I thought was going to happen already. Does it ruin the experience? Nope. Does it change everything for me? Nope. Am I still a little afraid of Kurt Sutter? Yeah. Just a little. I didn’t reveal your ending! I’m interested to see what you do with it.

The fact is, we deal with spoilers in our entertainment every day. Dr. Jekyll and Mr. Hyde? Yeah, I know there are million parodies out there right now, and by now everyone knows the shocking ending to that… (they’re the same person!) but back when it was written, no one knew. Over they years it has entered our popular culture until yes, we now know it to be the ending. But does that change the story that much? Not really, because the story is about man’s focus on the true nature of good and evil, and not just a dude drinking a potion and then suddenly it turns out that he’s the bad guy the whole time.

So everyone… relax. Calm down with the spoiler phobia. And also, stop trying to attach spoilers where they don’t belong.
Posted by Bad Shakespeare at 12:19 PM

Email ThisBlogThis!Share to TwitterShare to FacebookShare to Pinterest
Labels: spoilers