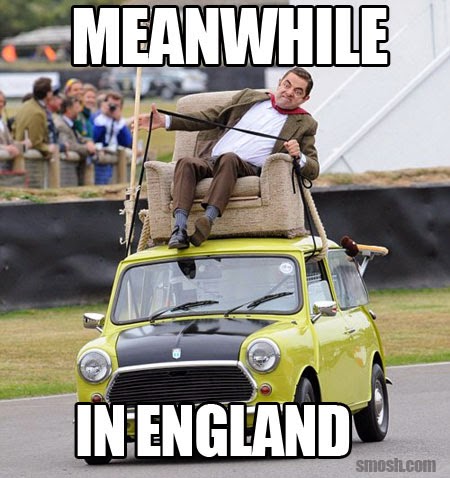 One of the recurring jokes I used to make before my little jaunt across the pond was that it was going to be difficult to assimilate to the English Language. The joke, of course, is that I already speak English because Benjamin Franklin didn't get his way all those years ago and we aren't speaking German. Lucky us, right?

And yes, I fully understand that there are some differences in the language. For instance "elevator" is "lift." "Chips" are called "Crisps" and "French Fries" are "Chips." Also you don't ask for the restroom, you ask for the toilet, and pub is pretty much any place that serves alcohol, along with some token amount of food.

What I wasn't surprised for was the sheer culture shock of it all.

Oh, I've been overseas before. When I was younger, my parents alerted me to the fact that I'd be moving to Korea for two years. And move there I did, because, well, I was 10 and probably not allowed to go live anywhere else at the time. Plus, it was Korea, back when going to the end of my block was a big deal. So I was aware that not every country is "America" and not every country is the same.

But still… for it to be that different was a bit of a shock.

So, yeah, when there's a large group its easy to play "spot the American" as they are racing, salmon-like, through a crowd of unamused Londoners.


Let's also talk a little bit about tipping. There are Americans who have strong feelings about tipping. Some feel that no one should tip, ever. There are also those that feel that people shouldn't tip, but then we should try paying our servers a livable wage. Then there are those that think they should tip, no matter what. A majority of people are in that category, that we should tip, no matter what. I, personally, am in that category that unless I order a burger and you bring me an entire cow with a loaf of wonder bread on top of it and then tell me "some assembly required", I'm probably going to tip you. (Even if you bring a cow with a loaf of bread on it, I still might tip, if that's what I ordered.)

Not so in England. Sometimes they have pre-added the "service fee". In some instances, if you try to tip they'll stare at you blankly, wondering who this odd person is trying to foist their change upon you is. I only really encountered one cabbie that seemed to expect to be tipped, and really then I believe it was because I was American, and especially lost at this point. No, really, my destination was only about five minutes away.

There's also the fact that they really seemed to love their Big Bang Theory over in London. Maybe it's that they feel they can take us if we're all like Sheldon. Not that I spent much time with my television on, but seriously, every time I turned on the television there seemed to be a mini-marathon of the best Big Bang Theory from the past couple of seasons. Not so much as a culture shock but a surprise. Off the top of my head I can think of about 80 or so other television shows I'd rather represent America than Big Bang Theory. Seriously, London, we can be a lot funnier than that.

I was also in London to study theatre, and this was the biggest shock: London loves it's theatres. I'll write more about this later, but one of the biggest shocks was the fact that on a given night, the theatre was going to be sold out. This included weeknights. And if you wanted to get something on the weekend, good luck. Especially if, for instance your professor really recommends you try to check out a version of Merchant of Venice that's sold out and you think "I'll just charm my way in." You won't charm your way in. My American charm isn't as charming as I thought overseas.

Everyone thinks about the big things when it comes to culture. Language. Customs. Religions. Food. And we'll be talking about food in a little bit. But what gets overlooked, often, is are these little things that you just don't think about when headed to a new country. In some ways, it may have been easier to study up on some big culture change, rather than tiny little things, like tricks of the language. But when it comes to little things, that's when the big shocks can really start to affect you.

Posted by Bad Shakespeare at 5:00 AM