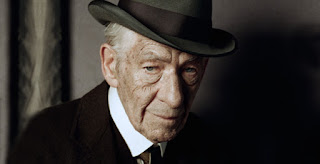 Sherlock Holmes is a fascinating character. He’s been portrayed on screen more times than any other fictional character. It’s gotten to the point that the Marvel Cinematic Universe is about to have a movie that will feature TWO actors who played the character several times over, at almost the exact same time. There’s a TV Show about him, and a medical drama that featured a version of the character that ran for eight years.

But why are we so fascinated with this character? He’s a work of fiction who the writer got so tired of dealing with that he even killed him off; only to bring him back when his readers demanded it. He’s generally unlikeable, a genius who takes cases to keep from being bored who’s smarter than everyone else in the room and let’s everyone know it. He’s a drug user. He essentially abuses his best friend.

But we still come back to him.

Such is the case with Mr. Holmes, based on A Slight Trick of the Mind, starring Magneto/Gandalf himself, Ian McKellen as the titular Sherlock Holmes, who now resides in a house and who’s memory is failing, obsessed with his final case. He lives there with his housekeeper (Laura Linney) and her son (scene stealer Milo Parker), to whom he tells the story of his final case, trying to figure out why the mystery bothers him so much. Oh, he also keeps bees, which is important to the plot.

This was a great film. I was lucky enough to see it on my trip to Dublin (where I got my Irish Movie Ticket! Which means I have one from England and one from Ireland! France… I don’t speak french, so I probably wouldn’t enjoy a movie from there. Canada, maybe?) This theater was pretty fun, but they packed us in like Sardines, and they had the 20 minutes of commercials before the trailers. I’d forgotten how spoiled I’d gotten since America has started showing commercials for the 20 minutes before the movie time actually starts, so you can stroll in later during the interview with the star of the hit new ABC Family Show “Happy Family Stands in Funny Pose While Fake Studio Audience Laughs” that’s really just an interview (wink) and not an advertisement for the show.

Anyway, it goes without saying that Ian McKellen makes a wonderful aging Mr. Holmes, working as a man who prizes his mental facilities above all others, as he starts to lose them. It’s not a physical loss, so this is something that’s difficult to portray on screen, but he manages to do it. Equally powerful is Milo Parker as Roger, the son of the housekeeper who works with Mr. Holmes to remember how he solved his final case, and solve another, smaller case of just who or what is killing the bees that he prizes.

One of the better ideas in the movie itself is the fact that everything - including memory - is a bit of a fiction. Holmes speaks about the stories that John Watson wrote about him, and about the embellishments he added to the cases. There’s a nice cameo from a former Young Sherlock Holmes portrayer who plays Holmes in a movie within a movie, adding to the distance between what is real, and what is fiction. Holmes claims to dislike fiction, and yet he lives in a world of it, everything about him has been carefully constructed by Watson, and the plot of the movie is largely concerned with Holmes so wrapped up in that construction that he can’t even figure out what is real and what isn’t.

Frankly put: the past is largely what we make of it, fiction or not.

And yes, there’s mysteries… several in fact. but they all play back seat to this idea of memory and how it affects us all. They mysteries are pretty much just what you’d expect from a Sherlock Holmes type movie, and service the part of us that want to see him do some brilliant deducting, but doesn’t take away from taking a cold hard look at this character.

That said, I really enjoyed this film. And it is a film, kind of out of place with the other tales of Melissa McCarthy bumbling around as a spy, or exploding iron suits that confront green rage monsters, or… what the hell was Hot Pursuit? It’s better than tat, anyway. I may say that this has the potential to be one of the best movies of the summer.