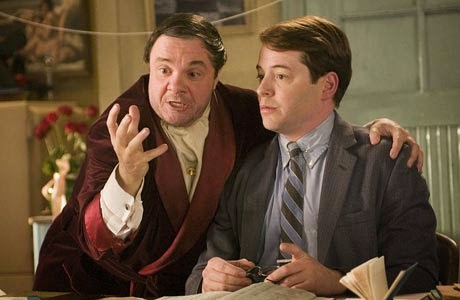 During the 2005 Musical version of The Producers, Matthew Broderick’s timid character, Leo Bloom, asks the question (when deciding whether or not to be a Producer) “When’s  it going to be Bloom’s Day?” Earlier in the movie, a calendar showed that the date was June 16th… the actual Bloom’s Day. It was a little bit of literary fun that Mel Brooks was having, thus showing that a movie that was a comedy, and partly a spoof could actually be smart, as well as funny.

Take that, next parody movie that’s just a string of catchphrases that showed you watch the trailers.

What is it about James Joyce’s Ulysses, an extremely difficult to read novel that still has people reading it - celebrating it - almost worshipping it - 92 years after it was first published? (Published-published… not serialized published. Serialization may have been cool back when Charles Dickens and James Joyce were doing it, but it makes figuring out what the actual publication dates should be difficult. Didn’t they think of English students today when they were doing this? Selfish writers.)

After all, the Leopold Bloom of Ulysses doesn’t go through the epic journey that Odysseus goes through in the Odyssey, which Ulysses is based on. In fact, he goes through much more mundane “adventures” based on the original story. Also, it’s largely concerned with his wife cheating on him, while most of the plot of the Odyssey features Odysseus’s wife being extremely faithful, despite the fact that Poseidon straight up wants to murder him in the face. Although her final, uber-long, unending monologue seems to accept that fact that she wants to be with him. (some readings of her final monologue that end the day clock in around 3 hours long. In DC this year it’s being done by an opera singer, to relate to the fact that Molly Bloom is, in fact, an opera singer herself.)

Maybe that’s it, though. Maybe it’s the normal adventures of this man that make his life so appealing. While stories of fighting giant cyclops or narrowly avoiding being turned into pigs is exciting for a bit, most of us probably won’t ever experience that. Although once I did punch a guy dressed as Nick Fury at a costume party. Just sayin’.

Leo Bloom is an everyman. That means it’s easy for us to relate to him. He can tell a story - an epic story - of just one day in his life, and we can relate to some aspect of it, even if we can’t relate to the whole things. Which is good, because I think it’s important for all people to understand that large sections of this novel are largely unreadable. Even places that stage live readings today, on Bloomsday end up taking about 33 hours to finish, and spread it out over a week. A week leading up to today.

Today is a day to celebrate not really the mundane, but the extraordinary within the mundane. Yes, we all have our daily lives we have to get through. And it may not seem it as we are getting yelled at by our eighth boss about that missing TPS report, or as we stand in line in the DMV to be told that we were supposed to get in that other line, or even as we wait in the post office and behold the fact that it’s become more and more obsolete with every passing form of technology (seriously, who would have thought that the mailman would eventually be replaced by robots?). But there’s adventure there. Some kind. Even if it’s picking up something new at the grocery store to try for dinner. Eavesdropping on a conversation as you wait in line. Or just flat out trying to pay attention to the world around you and realizing that it’s a pretty weird place.

To me, that’s what Joyce was trying to say with what eventually became Bloomsday. And that’s why it’s so important that we continue to be reminded of it. Because if a 92 year old book can pick that up, why can’t we? So, even if you aren’t going to attend one of the many celebrations occurring around the world, even if you aren’t going to put on your finest Edwardian gear… put down the phone, tablet, or whatever… realize that whatever you’re doing can wait a minute.. and look around. You’ll be surprised at what you might see.

Of course, I’d be remiss if I didn’t also point out that today is something less literary but no less important to nerd culture didn’t occur today, and that is Captain Picard Day. It’s that time of year that all of the children of the Starship Enterprise get together and have projects and such that celebrate the Captain that safely guides them through their little trek through the stars. (See what I did there?) As this was only a one off joke in a late-season episode of The Next Generation, I’m not sure it has as much weight as Bloomsday, or meaning, but it doesn’t mean we can’t celebrate with our finest cup of earl grey tea, or by engaging ourselves in conversation, or just flat out making it so. Maybe take today to re-watch a classic episode of The Next Generation, or that Macbeth that stars Patrick Stewart, or just going to see X-Men: Days of Future Past which is still in theaters. Which also features Patrick Stewart in a much less Captain Picardy role, but does feature him as Professor X, the role he was born to play.


It's important to celebrate this as well today. Partly because it gives us something else to celebrate, and who doesn't love a good celebration. But while I joke around, remember that Bloomsday itself started out not only as a small celebration, but the celebration of something that was in popular culture at the time. Remember, we may say that Ulysses is a classic, but it started out one day as a serialized set of stories - much like Next Generation. (Although Deep Space Nine did serialization much better than any other series, and well before it was cool. But it's Captain Picard Day, not Captain Sisko Day.) That's every other day. In our hearts.) Now it's considered not only a classic novel, but one that has an entire day set aside for it. So, why not celebrate Captain Picard day with the same gusto? Doesn't he have some important lessons to teach us as well about living life well, not wasting a day, and just making it so? It's all pop culture. Because one set of pop culture is "older" doesn't necessarily make it "better."

Regardless, spend today celebrating something, even if it's the mundane. 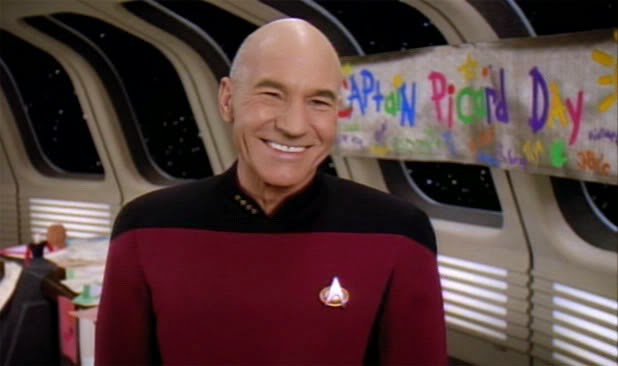 Posted by Bad Shakespeare at 9:43 AM