Save Our Morgan Freeman 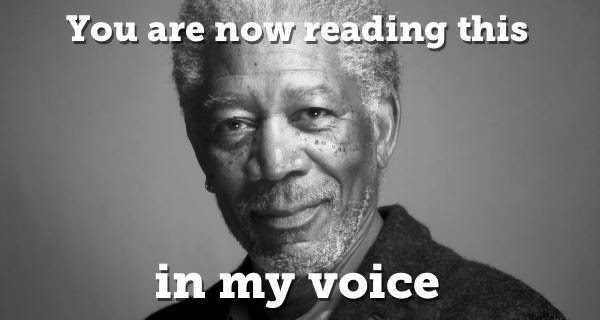 When I first heard about Kickstarter, I wondered how long it was before someone used it for evil. Well, not pure evil, but getting $40,000 to make a potato salad borderlines on somewhat evil. And the slow news days that followed that allowed us all to focus on the fact that some dude just got $40,000 for a mediocre potato salad is just wrong. For that much, I’d expect it to be made from the very finest potatoes, grown in a special field in Ireland that uses only ground up Leprechauns as fertilizer. Or something like that.

Kickstarter isn’t necessarily a bad thing. It’s great for exposure, if nothing else. I was quite happy when the makers of Veronica Mars decided that it was time to make a Veronica Mars movie. They were able to use it to bring the adventures of a no-longer teenage detective to the big screen. And I hope they do something like it again. It was also used to bring some completely unnecessary CGI to Zach Braff’s latest movie, which was pretty good even without the scenes of his imaginary beep-booping robot sidekick. But I digress.

(Quick note: Yes, I know we’re all supposed to hate Zach Braff despite the fact that we loved his first movie, then we hated it because it became to popular. I missed that particular memo.)

The bottom line is, Kickstarter has been used for a lot. Some of it Veronica Mars good, some of it non-Leprechaun fertilized potato bad. But the thing is, for all the movie theater seats that need to be put in, comic books that are being done, and cool inventions that may or may not be made, I feel that there’s one main area that Kickstarter is ignoring.

For you see, gentle folks of Bad Shakespeare, last weeks tragic passing of Robin Williams reminded me that our national treasures are only going to last so long. The loss of Robin Williams was tragic… and he had four movies in the pipeline. That means there will still be the ability to see Mr. Williams in four more movie roles. That’s fantastic. HIs comedy will live on. But his death was a wake up call that we must do what we can to preserve our national treasures.

Think about it. In the future, documentaries will be made, and they’ll be forced to rely on the current crop of actors. Can you imagine the history of the hover car being narrated by a Seth Rogen or a James Franco? Both wonderful actors in their own right, but are they Freeman-worthy? No.

Can you imagine further still, when we eventually start exploring the galaxy and learn about space penguins residing on some ice asteroid in the far reaches of space and we learn about the great space penguin war? Who will narrate that documentary? North West? Some other celebrity’s child with an even sillier name.

Which is where Kickstarter comes in. We need to set up a Kickstarter to raise money to get Morgan Freeman to read every word in the dictionary to save for prosperity. This way, the plight of the Martians as they struggle for freedom against their oppressors from Planet X will have a properly narrated documentary.

Now this won’t be easy. And we’ll have to invent a few new words, just in case. Remember, everyone, it was 7 short years ago that “iPhone” became an acceptable word. And I’m still not sure what an Iggy Azalea is, but we’ll have to account for things like that as well.

My proposal is simple: for $10 dollars, we’ll send you a picture of Morgan Freeman with your name on it, so you can envision him saying your name.

For a mere $50 dollars… the price of a nice meal… we’ll send you a picture of Morgan Freeman with him having written your name on the picture. Then you’ll at least know that his name was temporarily thought about, and possibly confirmed by Morgan Freeman.

For $100 dollars, you can get a picture with his name, and a recording of Morgan Freeman saying your name.

When you reach the $500 dollar level, Morgan Freeman will record your name in the outgoing message of your voicemail. Name only. For $1000, he will record the entire thing.

If you can donate $100,000, we’ll be able to hire Patrick Stewart to get into a debate with Morgan Freeman about something, just for you. Think about that argument.

Please, everyone… don’t think about yourselves. Think about your children. We have to preserve our precious resources, not just for us, but for future generations. Do you really want your child to learn about the workings of Time Travel through a documentary NOT recorded by Morgan Freeman? Think about it. That’s not a future I want to put generations through. Dig Deep.

**Please note, this isn’t real, and Bad Shakespeare has no affiliation with Patrick Stewart, Morgan Freeman, James Franco, or Seth Rogen. However, they all seem like cool guys who would be in on the joke if the people who they have hired to Google for them find this page. Don’t actually send money, unless you really, really want to.
Posted by Bad Shakespeare at 10:24 AM