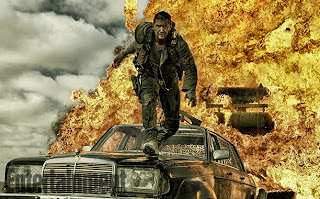 First a note: I’m very aware of the manufactured controversy surrounding the movie Mad Max: Fury Road, and the people that don’t want to see it for whatever reason. I don’t care; I go to the movies to escape my problems for two hours, not to pretend to get offended at things don’t exist. So... this is a review of my experience. If you believe that there was something inherently offensive snuck into a post-apocalyptic movie that featured an eyeless guy playing a flaming electric guitar, please understand that none of this is real. Thanks.

I went into Mad Max: Fury Road with pretty low expectations. Not that I didn’t hear it was the Greatest Action Movie ever (tm), but any time a movie is a remake of something that was last popular back when Mel Gibson wasn’t crazy; you’re going to be a little skeptical. I’m also going into Jurassic World with the same caution despite my natural love for all things Chris Pratt mixed with Dinosaurs.

Turns out I didn’t need to be THAT concerned. This movie blew away my every expectation. All of them. This was one of the best movies I’ve seen all year. (A little behind Kingsman, that one still stands up as the best.)

The movie takes place after a global apocalypse, the cause of which is never really explained but there’s a lot of deserts and not a lot of water. Max, a former police officer haunted by his past, is just trying to survive and keep his head down in the new Environment. Our first images of him are standing next to his extremely modified car, killing a mutated lizard for a morning snack, looking out at the desert pretty much set the mood for the rest of the movie: he’s a man torn between doing the right thing and wanting to survive. He’s quickly attacked and captured by Immortan Joe, the tyrannical leader of a nearby settlement who keeps people in line by controlling the water supply. He’s quickly marked as a Universal Blood Donor, and he’s used as a “blood bag” for a young War Boy named Nux. The real plot is set in motion when one of Joe’s lieutenants, Furiousa (played by Charlize Theron, proving she’s probably one of the best actresses on this planet... Captain Marvel, anyone?) is sent to get gas and bullets. She goes off course and it’s discovered that she’s “liberated” Joe’s Five Wives, the five women he’s specially selected for breeding and all the ickiness that entails.

What follows is basically a long car chase movie as Joe ramps up his heavily armed and stylized army of “War Boys” who fanatically follow him with a religious fervor. This includes the aforementioned flaming electric guitarist, which might seem excessive in other movies, but fits in quite nicely in this one.

As I said, I really liked this movie. After last week’s disappointing Hot Pursuit, it was nice to get back into the Summer Movie Season fold with a stylized action movie that focused on things like practical effects enhanced only slightly with CGI as opposed the latest version of look at what this computer can make us do. I’m not completely knocking CGI, but for every Hulkbuster or Ultron or even Caesar, it’s brought us a Jar Jar Binks or wondering just who we are supposed to be rooting for at the end of the latest Transformers debacle, or even a fully CGI Kevin James taking the fall at the end of Paul Blart: Mall Cop 2. (There have been two Paul Blarts, but still only the one Serenity. Wrap your brains around that, people.) But the movie is clear when in the beginning Max steps on the CGI lizard then hops into his very real car.

The use of practical effects is what elevates this movie to one of the better action films I’ve seen in a while. The title of “best” action film still probably falls to Shoot-em Up, a parody of action films but understands what this movie does, that action needs to be incorporated into a movie to help tell a story, not as part of a way to stall things going forward so we can see boom boom more explosions and action. When Max, early on in the movie, is tied to the front of a car in order to provide blood to Nux, it’s more than just a chance to get the star into the action, it’s showing the religious fervor, it’s to show that the violence here is going to be something happening to the main characters instead of caused by the main character, and it adds an extra element of danger to the piece.

Speaking of Nux, I think it’s important to highlight this particular character. A lot of thinkpieces about the peace highlight the film’s practical effects (as I just did) or the use of women  but they ignore this important character. When he meet him he’s hurt and needs blood from the main character, and is so willing to sacrifice himself to Joe that he repeatedly puts himself in danger. There’s a great moment that sort of bookends his story where he sees Joe twice. The first time Joe turns his head to look at Nux, and the young boy is elated with the idea that he’s being noticed. The second time Nux has already come to his epiphany that perhaps Joe is not the great man he originally thought. His character arc is probably the most compelling moment in the movie, going from brainwashed War Boy to willing to die for another cause, to save these women. His evolution is important, and the movie is just as much about him as it is about Max and Furiosa.

The other standout is Charlize Theron as Furiosa, who decides it’s time to save these women and deals with her own crisis of faith, trying to get them to “the Green Place” where she had been taken from as a child. She conveys a lot with her screen time, and brings a lot to her action sequences, which once again tell a story. The first time she fights Max she is clearly trying to establish dominance, but at the same time she’s clearly fighting for a cause, and that makes her a lot more fierce in her quest. Basically this is a movie about faith, and the varying degrees in which we may have to change that faith when we open the world around us.

Like I said, enjoyed this movie. It pulls together a lot of elements to tell a real story and crafts a movie into something amazing. Give it a shot, even if you aren’t a traditional Mad Max fan.

Nine out of Ten.
Posted by Bad Shakespeare at 11:24 AM