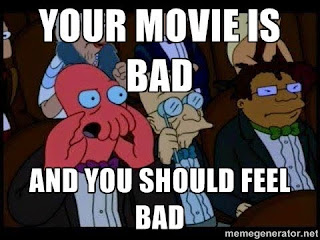 The first weekend in May is always my favorite. It’s always filled with hope. I always look at the list of movies being released and I hope that it’s going to be amazing, even though I know that in the back in my mind that some movie will end up being a disappointment. This year was different as there weren’t a ton of terrible movies, but terrible parts of movies. There was potential… I’m looking at YOU Aloha… but sadly, they just didn’t live up to what they promised. For instance, whoever designed the trailer to Fantastic Four probably deserves some kind of award.

But before we can get to how great this summer is, like we will tomorrow, let’s hand out the awards for the movies that were less successful than they could have been..

Most Needless Subplot. Let me list the number of reasons we needed to break away from Chris Pratt punching dinosaurs to view divorce proceedings in wherever the hell those kids’ parents were getting divorced. (Chicago? I didn’t care. Because it wasn’t taking place on an island full of dinosaurs.) Seriously, the plot was never resolved except to briefly view the parents picking their kids up from Jurassic World. It just goes to show you, kids… it just takes nearly being murdered by a genetically enhanced dinosaur to get your parents back together.

The Aloha Award for the Misuse of Bill Murray. Seriously, Aloha was a slam dunk on paper. Bradley Cooper as a disgraced contractor finding redemption by returning to the place he lost his love? Vague references to Hawaiian Gods? But nope. It wasted literally every piece of it. But the worst was the fact that it relegated Bill Murray to a villain after selling him as a wise old man in all the trailers. Bravo to the trailers that tried to sell him as an old sage, dispensing advice when in fact they kept highlighting him being threatening. He’s America’s Drunk Uncle. Why mess with that formula?

The Double D Award for Comedy Gold. Did you know that Sofia Vergara is well endowed in the chest area? Hot Pursuit does. And if you forget about it, they’ll bring it up a few times so you’ll know. The worst part about all this is that Modern Family shows that she’s an accomplished comedianne, and she could have been hilarious rather than focusing on her… assets for two hours.

Pixar is Testing My Limits Award. I love Amy Poehler. She’s pretty damn awesome. I love Pixar. They probably have a movie gestating about a couch that wants to be a love seat and when they make it, I’ll sob like when they told me Firefly was cancelled. But Joy in Inside Out really tested my patience. I get that she was supposed to represent the idea that we need to be happy all the time, but really I’m surprised that Anger didn’t smack her into next week. And her turn was WAY too sudden. Literally seconds before she fell into the pit of evil with Bing Bong, she had tried to basically kill Sadness. Then she pops up and everything’s ok. I walked away loving the movie, but wanting her to go away.

Most Needless Death that Needed to Happen. (Spoilers.) This is pretty much the only positive that will be on this list but it’s a tie between Bing Bong and Nux from Mad Max: Fury Road. Both of them were beloved. I get why Nux had to die… to prove his newfound devotion. But really? Same for Bing Bong. I really wanted him to take that trip to the Moon.

Actual Most Needless Death (Continued). In reality, the only death that didn’t need to occur was Topher Grace in American Ultra. This took the fun premise and continued it down the rabbit hole of just not knowing what the movie wanted to be about. Was it a fun stoner comedy? Was it a disturbing look at PTSD? Was it a mind bending twist on the amnesia spy drama? Nobody knows….. But it took me out of the movie.

Worst Temper Tantrum. Say what you will about Fantastic Four or any bad movie, but Josh Trank’s temper tantrum during the release of the movie was unacceptable. Badmouthing the movie rather than standing behind it was just unprofessional and killed any chance the movie had, no matter how small.

Best Metaphor for the Movie in One Trailer. The Griswolds bathing in Toxic Waste.

Worst Doctor Who. Terminator Genysis had a lot of problems. Most of the twists were spoiled by the trailers. The pacing was off, and even after sitting through it, I’m still not entirely sure what happened. But Matt Smith, the 11th Doctor, was featured heavily on all of the posters. He had less than 10 minutes of screen time. Thank God he was cut so we could get more of trying to watch the Terminator smiling. Oh, and if you’re going to leave a gaping cliffhanger of just who sent The First Terminator Back in Time, let’s make sure you’re good enough to get a sequel.

Lamest Joke Set-Up. Mark Wahlberg and his Teddy Bear are going to rob a sperm bank. What do we think was going to happen? Because literally the same thing happened in an episode of Family Guy.

Hey It’s Worked For Every Movie So Far So Let’s Not Do It. Seriously Avengers 2? No Post Credits Scene? No setting up Ant-Man or any of the other Billions of properties that may not need your help, but could have been awesome? No Spider-Man? No Black Panther? Nothing? 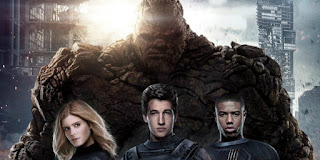 Unlike our other movie, which is a type of reboot, there was reason to make the Fantastic Four. Fox owned the rights and wanted to set up a new Universe that included FF and the X-Men to establish a world so they can dip in to that sweet, sweet Avengers type money. But from the glacial plot, to the temper tantrums, to the almost disdain for superheroics, everything abou this movie was just painful to watch. I’d really like to see a Fantastic Four Movie that works. But sadly, this is not that one. The bar has never been set lower: Of the three previous movies there was one that was literally not meant to see the light of day, and two that focused on how quickly they could get Jessica Alba naked and built a plot around that. This was a slam dunk. Most of their work was done for them. All they had to do was put together something halfway decent, get Hugh Jackman to show up to recruit them to the X-Men at the end, and boom. Hit movie. But instead we got… that mess.

The Thing has never been more depressing.

Bad Shakespeare’s Worst Movie of the Summer is…

Not much of a secret here. I hated this movie with the passion I never thought I’d feel for Ed Helms. From the murderous brother sold to the audience as “just a bully” to Ed Helms being a poor man’s Chevy Chase (that’s saying something) to a gross misuse of Chris Hemmsworth, this movie was just remarkably terrible at every turn.

I separate it from Fantastic Four because of the needlessness of it all. At least with FF Fox was attempting something. With this it was… I don’t know. The tone shifted wildly, and with not much surprise… I don’t know if anyone else in that theater wasn’t waiting for the “big reveal” that Christina Applegate was unsatisfied with her marriage. Or that Chris Hemmsworth kept hitting on her in front of his wife. Or that anything in the movie would happen. Hey, guess what, the car is wacky, will they figure out what all the fun things do? Because there’s a button on cars that totally make them explode. And then there’s the aforementioned “let’s bathe in toxic waste” scene that was in every trailer because… why not? I love stupid comedies. I named Let’s Be Cops as one of the best of last Summer. But like I said in my original review… the movie starts off with a picture of a dude’s buttcrack, and goes downhill from there.

So, with that in mind, I’m rating this my worst movie of the summer.