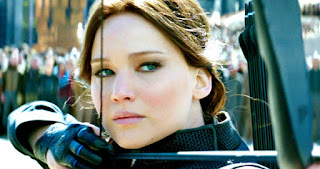 Let’s be honest. The Hunger Games: Mockingjay Part 2 was never going to be an easy movie to make.

Oh, yeah. Spoilers for The Hunger Games, the book, the movie, and the most recent time we sent our kids into a stadium to fight for our amusement. (Tuesday’s fights. Go, District 7!)

I’m not going to go much into details about the stories if you’re not familiar with them, you may want to read them and watch the movies. But basically… post apocalypse, things suck, and for some reason the best solution to everything is to have a bunch of kids try to murder each other for sport. Part 2 is all about somehow the best solution for getting Katniss and her inspirational story out of everyone’s mind by putting her back in front of everyone. And the first part of Part 3 tells the story of how she became a symbol for the rebellion, while Peeta becomes the symbol for the Capitol.

The movies were always going to change that. Short of strapping a go-pro on the top of Jennifer Lawrence’s head, thus probably killing her top billing in most of the movies, we were never going to get a story directly from Katniss’ perspective. There was always going to be the addition of other perspectives, like President Snow, President Harrison impressionist Interim President Coin, and… Gale, I guess. The movies didn’t bounce around that much, but still added another perspective: We were no longer directly privy to Katniss’ thoughts.

Mockingjay Part 2 picks up right where Part 1 leaves off, Peeta rescued and brainwashed into thinking Katniss is a bad guy, while Katniss deals with the fact that she can’t speak. Its a good place to pick up, it gives a natural arc to part 1 (rescuing Peeta) and it starts part 2 with an interesting image: the woman who’s been giving a “voice” to the rebellion now unable to speak. It also leads us into the most Hunger-Gamey part of the third novel, (now fourth movie) where Katniss now has to face off against the Capitol that has been turned into a basically a giant Hunger Games like arena.

Ignoring the fact that the Capitol has the time, energy, and resources to turn the Capitol into a giant Hunger Games type arena, Katniss that she has to go in and stop the war by killing of Snow. The problem is that this is one of the darkest and most personal parts of the book, and one that leads to the growth we see in the main character, and it has to be ignored for big special effects and… well, Hunger Games type action. (It’s in the title of the movie, after all.)

The Hunger Games isn’t about necessarily a bunch of kids murder-killing each other for sport. It’s about the personal grown of a young woman. She’s not a the chosen one. In fact, she’s the very opposite of the Chosen One. Her sister is Chosen, and Katniss takes her place. Peeta is the closest thing we get to a Chosen One, and he basically gets told that he has to do what he can to make sure that Katniss makes it back home to safety. But slowly, she learns to play the game. She learns who to trust and who to save, and the thing is… she never really stops playing that game at any point. She spends the first story learning to play it, appealing to people and sponsors to make them like her. She spends the second story (movie and book) again, playing off to people but more on her terms… then part of that point is that everything gets negated by the so-called saviors of District 13. She still has to play the game, get the people to like her, send her stuff. All the while she does this to survive. Help her sister survive, help Peeta survive, even help her survive. One could argue that she doesn’t really take agency for herself until her one selfless act, the one act not based on her surviving: the killing of Coin and the accepting that Snow, for all his manipulations, really believed in trying to keep the peace and everyone happy.

One could also argue here that Snow is just as much a victim as Katniss. But that’s another post. We’re here to talk movies!

The problem is that the books allow us to see this all through Katniss’ eyes. We get to hear the voice in her head as she makes these decisions, and a movie… a movie ignores that. I threw out at the beginning that the third book was going to be the hardest to adapt, and that’s true. Most of the third book is torture, Katniss gets real war wounds (She’s not the chosen one, remember. That’s still Peeta.) The most heroic act of the movie (saving Peeta) doesn’t include the hero and is largely off the book page. Even after she’s wounded, she still suffering from PTSD, and most of the “happy” ending that the movie gloms onto glosses over the fact that Katniss and Peeta emerge from the Games and the War extremely damaged, and they end up together because they’re able to save themselves from each other.

There are two big moments about the movie I do want to discuss. One really good. One really bad.

Let’s start with the bad because this is my blog post and I can really do what I want. When I say the ending of the story, there’s really two endings. One is when Peeta and Katniss are able to express their love for each other through their PTSD, which again, is largely ignored by the movie. The books take us on a little trip into the future, where Peeta and Katniss have two kids and are roaming around the remains of District 12. The movie follows this and I get why they want to put this in: for an idea of hope for the future and stuff like that. After all… look! Kids! That probably won’t have to fight in any Hunger Games, because they’re way past stuff like that again. (More on that in a minute.)

The book makes this very clear that this is a conflicted moment from Katniss. Will she have kids? She doesn’t know. She doesn’t want them. She can’t bring them into the world for fear of again: Another Hunger Games. (Again…. hold tight true believers.) It’s just a big leap that we don’t see in the movies. A stronger ending would have been the first one, the one with Katniss deciding that it was time to heal with Peeta. The decision for kids is an interesting one, but a little more meaningless without that voice from Katniss expressing her fear.

Ok, let’s end this on a good note. There was always one part of the book that never sat well with me, and that was the “symbolic vote” held by Interim “You’re Welcome I Took the Burden” President Coin and the Hunger Games Victors about holding… another Hunger Games with the Capitols kids. You know, most of whom were bombed by probably District 13 but is left ambiguous? Nothing says “let’s get the masses on our sides by killing kids.” Seriously, where did these people learn propaganda?

In the book, and maybe it was just my reading of it, but it was never 100% clear what Katniss was up to when she was voting to do it it “for Prim.” Part of it was her anger and her burning skin and her PTSD that the movie didn’t want to acknowledge. I don’t know. But the subtle change in this was wonderful. Jennifer Lawrence and Woody Harrelson played off the moment perfectly, and there was more of a secret conspiracy here. There was more of a plan in Katniss’ eyes. Even non-book readers could acknowledge that Katniss was about to stir something up. And this is really the most important scene. It’s the one where Katniss steps out of being just a puppet. It’s one where she starts to take agency for herself, one where she makes her first real decision of the series. It was extremely important, and I do like how it played out.

So, after all of that, many of you are asking if you should see the movie. Honestly, I don’t know. Iv’e been away from movies for too long over the last few months, I’m getting back into them. I enjoyed it. If you’ve seen the other three, you’re probably going to go see this one. And since, as of this writing it’s made enough money to give Jennifer Lawrence one of those Scrooge-McDuck style money bins she can swim in every night, you’re going to see it.