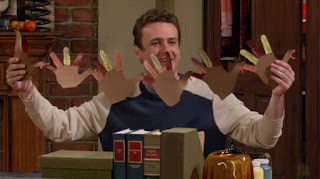 Ah, Thanksgiving. While it’s usually ignored as the little blip on the road from Halloween to that big holiday with all the red and green whose name escapes me, it actually is a pretty significant day. It’s not just a mere holiday where we give thanks for all of our blessings for the past year. It’s not simply a ritual sacrifice in which we char the flesh of an animal that has been sacrificed before we pray around it. (Thanks, Buffy the Vampire Slayer! Still a great joke.) No, this is  the big opportunity to get back together with friends and family that you might not have seen for quite some time.

For those of you in college, this is your opportunity to go back and see everyone again.  Hit up that bar that you always eyed as a high school student. See some old friends that have definitely changed because of that one class they took in Psychology and now they know where you’ve gone wrong your whole life, or maybe that one nerd finally found themself. No matter what the message will be clear: they’ll be miles ahead of where you are, at least at first glance.

For the rest of us, it means seeing family we haven’t seen in a year as they make their way to the locations that were hard fought for back in May when balancing that ever so careful precipice between “I don’t want to cook” and “I don’t want to travel.” You’ll see great uncles and aunts that were only spoken about in legend, cousins who have decided they are ultra vegans (and make sure you know they are ultra vegans as you go for that third helping of turkey) and grandparents that just want to see their kids get along one last time.

But, no matter where you are, by now you’ve realized… that it’s election season.

Yes, election season. We’ll happily speak with those that have different opinions on movies, books, video games, sports teams, music… but throw politics into the mix, and you might as well be declaring yourself a comic book super villain, ready to cast off all the innocents as you devour kittens.

The bottom line is, this yet another Thanksgiving controversy that you many encounter when dealing with. And how can you navigate through this minefield of gravy, football games, and politics and still make it through having to see these people again in a month on Christmas? (or whichever December themed holiday you’re planning on celebrating?) Fortunately, Bad Shakespeare is here to help, because I’m great like that.

Obviously, as the 2016 election began shortly after the results were announced for the 2012 election, ignoring the four years of local and midterm elections, this is a pretty hot topic. Everyone has their opinions on politics, and your family is to be no different, from the die hard Donald Trump supporter uncle to your cousin finishing his third year of college supporting someone named Bernie Sanders who appeared mysteriously when summoned by the mysterious primary elders. Where did he come from? Nobody knows. Rumor has it he’s not really even a real person, but the figurehead of a secret society I just made up.

How to make sense of all of this? Basically it’s this: We’re about a year away from the election, give or take a Smarch or so. The Democratic Field didn’t really need to whittle it’s way down too much, and it’s Hillary Clinton vs. they Mysterious Wizard Bernie Sanders, and they’ve had a few debates, but Hillary is probably going to win, just like she was probably going to win about this time in 2007. If anyone asks you about Hillary and emails, best to spill gravy on yourself and go change immediately, changing the subject to that funny time when you accidentally spilled gravy on yourself.

The Republican Party right now roughly resembles the WWE without all of the order, with debates so large that there’s actually a mid-card division fighting for what I assume is the Intercontinental Title. Leading the pack is Donald Trump, or Ben Carson, or whoever the news is telling us is leading the pack. The truth is, I don’t know really know what’s going on with the Republican Party at this point, and I’m too afraid to ask. If anyone mentions anything about it, simply nod, smile, and talk about that time you spilled gravy on yourself.

Over the past few years, the concept of stampeding into a store when it opens like wild animals the day after we give thanks for everything we have has become… well, depending on who you ask, either a big problem or something we should push even earlier so we start our Christmas Shopping sometime around January 5th of the pervious year. I know: it’s amazing: we refer to something as a doorbuster than we’re shocked when people actually bust down the door.

For those of you who don’t know, Black Friday is the day when stores release their sales in hopes of making a profit for those people who haven’t heard of “the internet” or the fact that you actually get your best deals on December 24th, when people are trying to dump merchandise.

If you have a family that will be going out shopping a few minutes after finishing that last helping of pie, send them on their way.  Pack them up a lunch, and hope that the odds are ever in their favor.

If you have a family member that points out the absurdity of the store opening on Thanksgiving while they’re in a reclining chair, watching Football and forgetting that there are hundreds of people not with their family but cleaning stadiums as they watch their sport, don’t engage. It’s a trap. Smile and nod, smile and nod. Remember, this is football, and it’s their tradition, and since it’s their tradition, it’s great, while everyone other tradition is stupid.

For those of you who don’t know, processed meats have entered the most recent list of things that will kill you immediately upon looking at it, according to the World Health Organization. Your nephew that is currently a level 24 vegan, has read this article and memorized every word. Every. Last. Word. And they will let you know, but just when you’re preparing the turkey, then when you’re cooking the turkey, and later when you’re eating the turkey. There’s no escape from this. I promise you. I’d like to pretend that there’s a way out, but there isn’t.

The important thing to remember is that you’re with family, and after the third beer or third glass of wine you should be more that suited to listen to whatever report currently says that all meat is going to kill you before digging into that sweet, sweet, bird. Keep it nice and juicy, too. Mmmmmm… Turkey…

There are plenty of other controversies that are probably going to come up. Climate Change. Terrorism. Free Speech. Immigration. Common Core. What you’re going to do with your life once you graduate from college. All hot button issues that are best reserved for when a carving knife is within reach. But the important thing to remember is that you’re spending time with family.  The people you’re so blessed with that you just have to stay away from the most of the year.

Basically I’m saying it’s one day. You can do this. I believe in you. 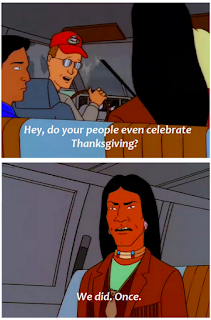