By Grapthar's Hammer, You Will Be Missed 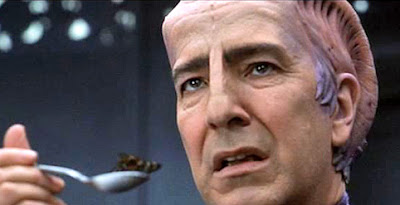 Did you know that Galaxy Quest was voted the 7th Best Star Trek movie of all time, which is impressive since it has the handicap of not being a Star Trek movie, and being a parody of the series, fans, and actors? I say parody, but what I mean is a loving tribute to the Star Trek series, by someone who has obviously been a fan for years. It’s about a group of actors who were on a popular science fiction show that was cancelled and developed a cult following. They soon discover that a group of Aliens have been using the show as a guide to build their civilization, and soon get those actors to help save their galaxy.

One of those actors is their version of Leonard Nimoy, in this movie called Alexander Dane. Alexander is a Shakespearean actor who can’t believe he took ths part as the alien Doctor Lazarus who’s catchphrase is “By Grapthar’s Hammer, you shall be avenged.” He hates this line. He vows to never say it, despite the number of nerds who gleefully say it to him. One of those nerds being one of the aliens who lived his life as Doctor Lazarus, and annoys him by spouting this phrase.

It’s a funny recurring gag. Alan Rickman sells it with his exasperation each time it’s uttered to him.

Late in the movie that alien is killed, and lays dying in Alexander Dane’s arms. Alexander looks at the alien and tells him that line. This time it’s with a gravity and emotion that is unlike anything we’ve seen in the movie so far. It’s a devastating scene that could have easily been cheesy or overplayed. It could have been a big laugh line, but instead it’s one of the serious moments in an otherwise light movie.

I was saddened to hear of his passing on January 14th. As with any actor I admire, I have to process what it means that he’s gone. This was the man who brought so many great characters to life. This was the man that JK Rowling had in mind when writing the iconic character of Severus Snape, going so far as to tell him how the book series ended to get him to play the part.

I, like many people, will remember him as one of the only people to actually get close to stopping Bruce Willis in Die Hard. Or as the voice of the depressed robot Marvin in Hitchhiker’s Guide to the Galaxy. Or as the hand-picked voice of God himself in Dogma.

The thing about Alan Rickman is that he could do high class British Drama, then turn around and hang out with Kevin Smith and his stoner buddies and never once feel like he’s “slumming it”. He was an actor that always did his best, whether he was facing off against Bruce Willis, or if he was trying to get Rowan Atkinson to tie a package faster so his wife can’t see what he’s doing.  He was Alan Rickman. He was a reminder to put your best into everything, even if the actor you’re going up against is playing the world’s most famous English outlaw, and can’t be bothered to speak in an English accent.

So, today we say goodbye to another great. As the man influenced me and how I watch movies, I felt it appropriate to eulogize him on Bad Shakespeare.  His roles always delighted me, and even if I saw a bad movie starring Alan Rickman, I never saw a bad Alan Rickman performance.  His was a lesson to put your all into every role, and to make your mark.

Goodbye, Alan Rickman. Your presence will be missed.
Posted by Bad Shakespeare at 12:03 PM