Book Report: An Object of Beauty by Steve Martin 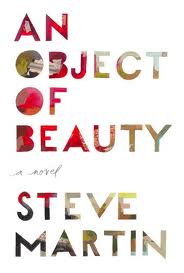 When I decided I was going to go full on with this whole “writing” thing, I took a step back and thought about who I really enjoyed reading. I love Dave Barry, if you couldn’t tell from the fifty times that I’ve mentioned it (in only 118 posts... not bad.) I like Richard Russo... Empire Falls still holds a warm place in my heart the fourth time I read it. I like filmmakers like Kevin Smith (I haven’t mentioned him just yet) who are able to capture what I’m feeling at any given moment.  But there’s one writer that I don’t just really like... I really want to try to emulate. I want to be a writer as good as this one day. That writer is Steve Martin.

Steve Martin is a great comedian and actor who’s managed to write some amazing stuff. He wrote The Jerk, a great movie. He wrote Bowfinger which not only managed to make Eddie Murphy funny again, but also managed to satirize reality shows back before reality shows were a big thing. He has written some amazing novels that are funny as they are thought provoking. But one book still stands out in my mind as one of the best that he’s written: An Object of Beauty.

An Object of Beauty is about a young woman, Lacey Yeager as she sleeps/works/scams her way through the art world in the early 1990’s headed straight towards 9/11. The novel itself is told through her friend, Daniel who only has a small part in the novel, but tells the story anyway. As he says early on: “I have found that-- just as in real life--imagination sometimes has to stand in for experience” letting us know that while this story is unabashedly Lacey’s, he is going to tell it to us (for reasons that are clear towards the end of the book.)

It’s obvious that Martin did his homework on the lofty idea of what “art” is. He goes into such detail about some paintings, but he manages to do it in a way that’s not off-putting or makes you skip ahead thinking, “Great... another art lesson.” You actually start to care about the facts, you start to think about how important art is. Which really helps to drive sort of the conflict between Lacey and Daniel (if it can be called that) which is how he really feels the way she treats art is to sort of devalue it. Martin gets us to really care about art that we never really get to see and appreciate, and then pulls the rug out from under us as Lacey does what she does.

There are some really good twists later in the book, particularly ones that focus on what I mentioned, with Lacey and her ultimate devaluing of these pieces of art we’ve learned to love for hundreds of pages. It’s important to remember that while I call these “book reports” because I want to analyze the books, I want a forum to devour them; I want you to read these books, so I don’t want to spoil EVERYTHING. (Maybe I should consider getting a group together. Maybe a “club” of people to “read” and analyze books before we devolve into drinking wine and shouting at each other.)

Martin’s writing is once again incredible. He’s able to put tiny details into an interesting way that in lesser hands would have you scratching your head or maybe counting the pages until the book was over. But he’s also able to make things funny in a way that’s undoubtably Steve Martin... there were times when I caught myself laughing out loud at a few moments. But almost instantly he’s able to move us back into the book, caring about what is going to become of Lacey even as she does some terrible things. (She’s not the most likable of protagonists. I don’t think we’re supposed to like her. As Daniel may have some lost feelings for her, I don’t think he likes her much, either.)

Ultimately, though, the book is able to convey the problems that arise when you start attaching value to different objects - any objects - of beauty.

I’m sure many of my friends are tired of me recommending me this book at every chance. I’m going to keep doing it... you should read this book. It’s a fantastic read and by the time you’re done, you’ll want to find something similar to read, but you won’t be able to because this is a unique book.
Posted by Bad Shakespeare at 4:00 AM