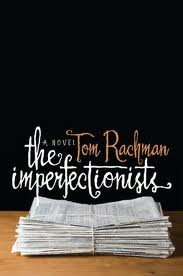 A washed up stringer. An over-zealous copy editor. A not-quite inventor slash assistant editor slash lacky. An obsessed reader. A nervous newbie. These are just a few of the characters that we meet in the Tom Rachman’s first novel, The Imperfectionists.

I have to say, I loved this novel. It’s the story of an unnamed English language newspaper set in Rome, and the lives of the different staffers. What makes this so brilliant is the fact that each chapter is a character study of a different staffer, with the chapter slowly focusing on just the one. What’s great is that it’s written in such a way that when characters do cross over - and they do, after all they all work in the same place - it feels like you’re revisiting an old friend and finding out what they’re up to.

Having each chapter focus on a different person is a tricky prospect, but Rachman is able to do it in a way that moves the story along. The novel, while a collection of short stories, also tells a larger story of this now failing newspaper, and why it was really founded. I was initially skeptical of a story told this way, but it ended up just being a really interesting way of telling a story.

There’s also the fact that it is genuinely a funny novel. There’s some drama... an early story is actually kind of sad. But Rachman does a great job of balancing the the drama with funny.

It’s really easy to write about a book that I hate. I get to spend five hundred words talking about how much I hate it, and being funny about it. But The Imperfectionists is difficult to write about because I don’t want to tell you all about it, I just want you to go read it.
Posted by Bad Shakespeare at 10:34 PM

Email ThisBlogThis!Share to TwitterShare to FacebookShare to Pinterest
Labels: Book report, the imperfectionists