Book Report. The Walking Dead: Rise of the Governor 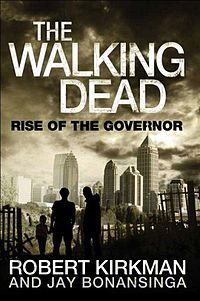 I’ve always loved a good villain. Heroes are fun to examine sometimes, why do they do why? Why do they feel compelled to save the day? Why with all of their power do they not choose to be a villain? But when it comes down to it, I love it when someone gives us the opportunity to look into the mind of a villain. Which is why I was extremely excited to read a prequel novel to one of my favorite comic book series, The Walking Dead. in this case, it’s The Walking Dead: Rise of the Governor by series writer (and creator) Robert Kirkman and Jay Bonansinga.
For those of you unfamiliar with The Walking Dead or are only familiar with the television series, the Governor is Phillip Blake, the leader of the seemingly ideal town of Woodbury. The Governor (who calls himself this because he feels that any higher title would make him seem like too much of a dictator) was considered one of the worst villains Rick and his crew would ever encounter. A paranoid man who runs the town with an iron fist, he keeps his zombified... well, we’ll say “daughter” for now... as a pet in his apartment, he makes life miserable for Rick, going so far as to cut off his hand and order the death of Rick’s wife and infant daughter. It’s easy to see him as a monster (and a little difficult to defend him otherwise after that statement) this book tells about how a simple survivor became the murdering, rapist that is the Governor. He didn’t start out so, he started out as a survivor like the series hero Rick, trying to find a safe place in a world now infested with flesh eating zombies.

There was a writer who was talking about writing Lex Luthor. The problem with writing someone like Lex Luthor, he said, was the fact that Lex didn’t see himself as evil. No matter what he did, he wasn’t fighting Superman because he didn’t like the hero. He talked about how Lex Luthor was trying to do what is best for for Metropolis. It’s easy to see the Governor in this light in the book. Society has collapsed. Supplies are low. He is travelling in a group with his brother, the little girl Penny, and two other people. How do they survive? We still have the brutal world that Kirkman has created for his comic book series, but we’re seeing the other side of it. Whereas Rick had a lot of people to lie on, the man who would be come the Governor just didn’t have that.

Ok, so I’m talking around a lot about a gigantic, hugely wonderful twist which I’m about to spoil. Prequels are hard because you are familiar with the source material, you pretty much know who lives and who dies. You know that Penny will die. You know that Phillip Blake makes it to Woodbury and takes it over. But Kirkman and Bonansinga put in a fantastic twist that just subverts all your expectations. If you haven’t read the prequel novel, stop reading this now. I’ll wait for you...

The big twist is that Phillip Blake in the novel... dies. You see, he’s traveling with his daughter, brother, and two high school buddies while they try to find a place to survive. Phillip’s brother, Brian, isn’t built for the new world, and is unable to kill. Phillip is killed after they find Woodbury, and Brian, who has watched his brother and niece die (and saw the horrible things that his brother did) Brian takes over Woodbury and introduces himself as Phillip. This is brilliant. The subtitle, “Rise of the Governor” wasn’t referring to Phillip Blake’s rise in Woodbury. It’s about what Brian sees that turns him into the homicidal rapist that orders the deaths of innocent people.
For fans of The Walking Dead, this is an excellent book. For even non-fans, this is pretty spectacular. I loved the imagery, I loved it not falling into too many of the prequel tracks that it could have (only one or two loving nods to the series, nothing too cheesy.) This is how a prequel should be done: set up your expectations, play with the knowledge that we have, and then give us a new and interesting story. However the writing is a little... off. It’s cliched in places, and can get repetitive. (In fairness, how many ways can you describe crushing a zombie’s skull?) But it’s not so distracting that it  will completely stop enjoyment of the book.

This is supposed to be part of a trilogy leading up to the Governor in the comics, not the TV show. I’m looking forward to checking out the rest of them.
Posted by Bad Shakespeare at 4:00 AM