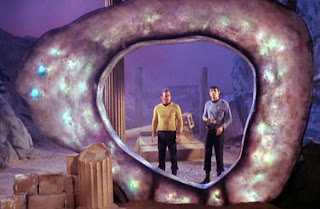 As you all know by now, I’m excited by this year’s crop of Summer Movies that are making it a prosperous Summer Movie Season. Now that the world has been saved by evil fire breathing terrorists in Iron Man 3 and we got to see The Great Gatsby as I’m sure F. Scott Fitzgerald originally intended, it’s time we start focusing on one of three movies Bad Shakespeare is going to closely celebrate this summer: Star Trek Into Darkness. (The other two will be Much Ado About Nothing, and of course Man of Steel.) I want to take this week to discuss Star Trek and it's Shakespearean Influence, but in a way that didn't involve Hamlet being translated to Klingon.

I’m a huge fan of Star Trek. I remember watching all of the original series in reruns when I was growing up (this was back before you could just pop a series in a DVD player, or stream it Netflix, or download it directly into your brain. That last one is for future generations that have this blog beamed directly into their heads.) And it’s a great show. It was ahead of it’s time, even going so far as to feature one of the first interracial kisses on television. It also helped introduce the world to William Shatner, who talk-sang his way through albums back before things could be fixed with auto-tune.

This week, in honor of Star Trek Into Darkness coming to theaters, I’m going to pick one episode from each of the five series, and write about them. Yes, even Voyager. I’m going mostly in order with the exception of one series, and you’ll see why when you read it. Now, onto Bad Shakespeare’s Star Trek Week.

Star Trek: “City on the Edge of Forever”

Dr. McCoy: You deliberately stopped me, Jim. I could have saved her. Do you know what you just did?

Spock: He knows, Doctor. He knows.

For the original Series, I was wondering which episode I’d write about. There of course was “Space Seed” which may have been appropriate since it features Khan and Benedict Cumberbatch most certainly isn’t playing Khan in the upcoming Star Trek movie (WINK). But I decided to write about one of the classics, “City on the Edge of Forever.”

For those of you who don’t remember, “City on the Edge of Forever” focuses on a time traveling McCoy who goes crazy, time travels, then stops the death of Edith Keeler, thus changing the timeline so the Nazis won World War 2. Spock and Kirk realize that the only way to save the timeline is to allow her to die. It’s a deep, tragic moment, where Spock and Kirk have to ignore their heroic instincts and allow this woman to die because everything would be all wonky if they allowed her to live. (Time travel! Yay!)

I can remember watching this one when I was little, and this was the first instance I remember of when the “good guys” didn’t just win. No loophole. No, “hey, let’s bring Edith to the future with us!” No way out, other than Spock and Kirk holding McCoy back long enough for a woman to get hit by a truck. Boom. Episode over. The good guys “win” by allowing someone to die. It was brutal to see someone killed like that. I still remember the gut punch that was that episode of television.

This is one of the more tragic episodes of television. It also takes a huge risk. By not acting, our heroes restore a timeline (I know... this week there’s going to be lots of references to timelines, spaceships, and tribbles. It’s Star Trek Week. When in doubt, just yell something that sounds technical.) and save the day. I’d have to say that this episode introduced me to the idea of a tragic ending, much of what I’d learn to love later in Shakespeare. Not all endings had to be happy in the traditional sense in order to be best for everyone. Sometimes, someone has to die in order to make things right. Sometimes someone dies to make a point.

Tomorrow, we are going to head on over to The Next Generation to check out Captain Picard’s “Inner Light.”
Posted by Bad Shakespeare at 4:00 AM