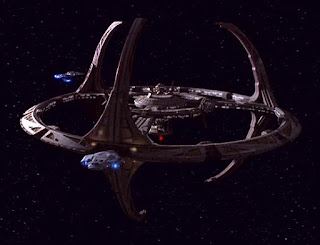 All this week I have been writing about the various episodes of Star Trek series and their relationship to stories. There were quite a few covered, I recommend you go back and read them. But there was a glaring series left out: Deep Space Nine.

Some of you have asked me why this series was left out. It’s simple. It’s my favorite. It’s my favorite for a lot of reasons. I sat down to pick and episode to write about, and I couldn’t. Which one should I write about? “Far Beyond the Stars?” “Nor Battle To the Strong”? “Wrongs Darker than Death or Night”? The list kept growing. While it was easy to pick out an episode of Next Generation or Enterprise and play with that, I kept getting stuck. I couldn’t pick just one and leave it there. I needed to write more. The original draft for Wednesday’s Post (The original Deep Space Nine post) was four pages long. FOUR PAGES. I get to a page and a half on a good day of writing Bad Shakespeare.

Last year when I started this blog, I asked the question as to whether we want to count movies and TV shows as literature. I answered that with an in depth look into the world of Breaking Bad, and those tended to be the most popular posts. (That and the Life of Pi review during the Oscar Movie Marathon. What’s up with that, people?) I think partly because people enjoy Breaking Bad, and I think partly because people were looking for spoilers. I hope they stuck around for some of the other posts.

So, I’m going to do that again with Deep Space Nine. Which I’ll start referring to as DS9, because Deep Space Nine will increase my word count, it’s a lot to type. I want to look at a series that was doing serialized drama and large casts back when it wasn’t cool. It was a series that took risks, told stories that other series, much less Star Trek series, wouldn’t tell. Let me put it this way, one of the main characters is a terrorist. I have a feeling that might not play so well today.

For those of you who are unfamiliar, Deep Space Nine is about a space station that orbits Bajor, a planet first introduced in The Next Generation. It follows the crew as they help Bajor become part of the Federation, and as they do battle against a dangerous enemy from the Gamma Quadrant. (The earliest literature featured monsters and gods eating their kids. This isn’t so weird, people.) I plan on exploring characters, themes, and various episodes for the duration of the summer.

This post is going to be short because this is an introduction, but stay tuned for Deep Space Nine Fridays on Bad Shakespeare.

Posted by Bad Shakespeare at 8:09 AM