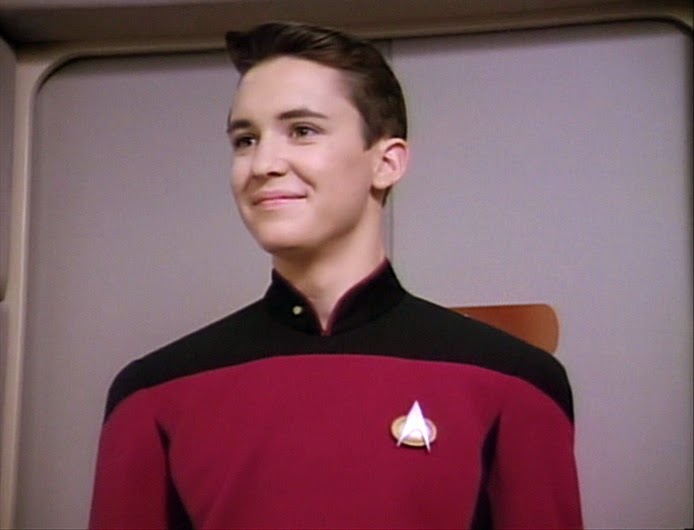 I’ve long chronicled my absolute love of Star Trek on this blog. I first got into it a little bit with re-runs of Kirk, Spock, and McCoy, boldly going to gangster worlds or cowboy worlds. I reveled in the adventures of Picard and Riker. I really loved the complex writing and characterizations with Sisko, Odo, and O’Brien. And I certainly tolerated the adventures put forth by the rest. (Voyager and Enterprise weren’t as bad as everyone said, but that’s another post for another day.)

I also have been chronicling my adventures in figuring out just who I am. It started this year with the confirmed revelation that I didn’t want to be a high school teacher, something that I allowed myself to be defined by for so very long, whilst getting into graduate school (again) for more study in the field of English, getting my masters degree in Literature. I was surprised, the other day, when the two things dovetailed together in an interesting way, and I learned something I probably should have thought about a long time ago.

All of this introduction brings us to how my life was forever changed by everyone’s least favorite character, Wesley Crusher.

For those of you who don’t know, Wesley Crusher was introduced in the first season of Star Trek: The Next Generation as the son of the ship’s doctor, Beverly Crusher. His father had served with Captain Picard back when he wasn’t so-Captain-Picard, and well, some of his command decisions resulted in his father’s death. It’s also important to note that while Wil Wheaton is a very cool guy now, Wesley Crusher really wasn’t that accepted by a lot of fans. Let’s put it this way: Yeah, Star Trek is cool now, but there was a time when it wasn’t and you hid your fandom away. But even Star Trek nerds (back when nerd was a bad thing) made fun of Wesley.

Wesley’s path was laid out pretty early on in the show. He started as a kid, fascinated with how a Starship ran. Things changed around the first season “Where No One Has Gone Before” where the Enterprise encountered a being named “The Traveler”, because his name was unpronounceable by humans. (Bear with me on this… I have a point.) In any event, there was some spaceship shenanigans and the Enterprise was thrown to the edge of the universe where everyone started suffering from space madness or something. Wesley was able to help get the ship back, and the Traveler told Picard, “He’s going to be important. Don’t tell anyone.”

Of course, then Picard told everyone, apparently, but that’s beside the point.

Picard, taking this to mean that he should encourage Wesley’s natural talent, promoted him to acting ensign where he had to wear an even dorkier sweater, but nonetheless was on the path to join Starfleet. Eventually, Wesley does join Starfleet, and does what everyone expects of him: tries to be the best that everyone thinks of him.

Here’s where I start to empathize. Later in the series, he comes back for a visit and he’s moody, depressed, and not really sure where he fits in. There’s an episode that features the Enterprise trying to remove a colony from a planet that had been negotiated back to an alien empire. Wesley thought it was wrong to remove these people, and resigned from Starfleet Academy. Against the expectations of well… everyone.

See, the thing is, he had a ton of support. I had a ton of support when I was going to be teacher. More support than I ever thought I would get. And I can understand how easy it is to get caught up in the “rah-rah” ness of it all. Just like in Star Trek, Starfleet is the ultimate goal for a lot of people, and it’s not easy to get in. Several times over the course of the series, Wesley would try to get into Starfleet but Wil Wheaton’s contract as a regular wasn’t up he would get rejected. This wasn’t easy.

Rewatching “Journey’s End” was important to me at this point. Wesley doesn’t quit Starfleet for some concrete reason. He doesn’t quit what’s supposed to be the best thing in the galaxy that millions of different aliens tried to get into for a solid purpose. He quit it because it “wasn’t for him”. But the important thing, and what I struggled with and couldn’t really articulate for a while, is that he quit for the unknown.

This episode just randomly aired one day while I was flipping through the channels. What was odd was that I don’t normally watch that much television during the day… this was an exception. But for the first time, watching Wesley remove his uniform, become his own man… I started to understand my own feelings about what I was scared of in my new path. Having something set in front of you that’s pretty stable then changing it for a wide open adventure… that’s the definition of leap of faith.

I’ve often said that literature and inspiration come from many different places. It just surprised me that it came from this unlikely source. It surprised me that I was finally able to articulate what I wanted from life. It surprised me that something I watched so many years ago then put away would have this much influence on me. But it did. A lot. And I’m glad it did. And while I do wish that my new worldview came from the sooth baritone of Captain Sisko, or the Universal worldliness of Captain Picard… I’m glad it came from the guy who was trying to find himself. The guy who just wanted to do what was right. The guy who wanted to live up to his potential, and got caught up in what that meant. Wesley Crusher.
Posted by Bad Shakespeare at 4:00 AM