Teaching vs... well, Teaching, I Guess 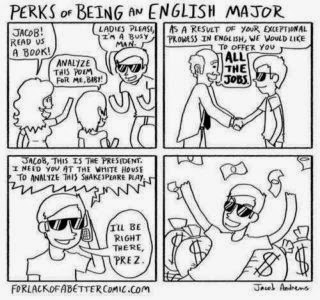 As some of you know, I recently decided to change my graduate school focus from “Teaching Secondary Education with a concentration in English” to “English Literature.” Or as some of you have let me know, “You selfish [something stronger than jerk but I’m going to go with jerk because it’s my blog and I get to write what I want], think about the children.” I’d like to say it was a long transition, filled with peril and adventure, but other than a few negative comments and needing to update my immunization record, I just had to reapply, then cross my fingers until I got into the new program. Then I was in.

Allow me to clarify real quick (I sum up): The decision to leave the education program was a long, difficult decision and I catalogued it all right here. That being said, the actual physical act of saying, “I want to be in the English Program instead of the Education program” just involved taking some paperwork and refilling it out. Mostly because I had been accepted to the English Program, back when I first thought that “hey, maybe I don’t want to be a teacher anymore,” but then talked myself out of it because, well, what I’m about to get into.

Being in the English Program now, I had to register for classes, and that’s when it truly and totally hit me that I was no longer studying to be a teacher. I mean, I obviously had inclinations before, mostly that I was no longer showing up at my internship anymore, and for some reason I got a lot less of the teacher jokes that were posted on Facebook.

The biggest difference, for me, is mainly that I have such a wide variety of classes to choose from. Back when I was studying Education, it was a pretty clear cut path: You take this class, then you take this class, after that you take this class, then internship, then you’re a fully licensed teacher with all the rights, privileges, and access to Facebook jokes you can muster. It’s a strange feeling knowing that I can take “Introduction to Cinema” or “World Literature” and it’s all because I want to, and it’s what I choose to learn.

I keep telling people that for three years, I felt like I was in the world’s longest job interview. I’d take a class, then at the end people would ask me, “how was it? Do you want to continue?” Of course, the atmosphere is supportive, so it was more like, “How was it? You want to continue.” I don’t meant that in a bad way, necessarily, but it’s easy to get wrapped up in it all. I know at least one other person in my class that ended up dropping out of the Education program for a lot of the same reasons i did. I probably should have listened when she talked to me, and I had the same debate.

But it was this long, focused job interview, and at the end, I knew what I’d be doing: getting a resume together and going off somewhere and teaching. The goal is pretty similar with what I’m doing now: I eventually want to teach, just at the college level with all my newfound college smartiness. Also, write and publish things that make people scratch their chins and go “hmmm.” As opposed to now when then scratch their heads and go “whaaaa?”

I guess it just surprises me, the big change that comes with switching like this. I spent to much time focused on the one goal, having this option and control over what I want to study is almost overwhelming. I say “almost.” Because there really is an Introduction to Cinema class, and hey, I’m going to take it. Because I’m me. And have you not been paying attention?

But it's an exciting new journey that's remarkably similar to the old one in some ways. I'm going to have to take classes, do my best, and probably have to finish a lot more reading. Like, a lot.

I’m looking forward to figuring out what wacky adventures I’m getting into next.
Posted by Bad Shakespeare at 12:51 PM