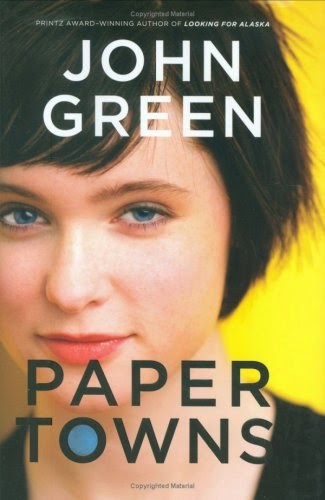 Quick note, this is an analysis of the book Paper Towns by John Green. It is not a review. What does that mean for you? It means that I’m going to be spoiling the ending. Also, the book came out six years ago, so you’ve had time to read it. Yes, I know, John Green is all cool now with his Youtube Videos and his witty responses to being banned and the Fault In Our Stars causing dust to pop up in theaters everywhere towards the end, so his books are going to be suddenly re-discovered. But you don’t tune into Bad Shakespeare for the reviews, you do for the insane ramblings on how robots are going to take over the earth. This is a long paragraph to basically say, spoilers follow.

The Manic Pixie Dream Girl is an interesting concept. For those unfamiliar with it, this was a term invented by one of my favorite writers, Nathan Rabin to describe Kirsten Dunst’s character in Elizabethtown. It’s the bubbly girl with a dark past sent to teach the brooding male protagonist a lesson. Naturally the phrase has been analyzed, reconstructed, played with, removed, and, regretted, sadly by Rabin himself. But it’s an interesting concept.

Margo Roth Spiegelman, the… well, “main-ish” character of John Green’s Paper Towns could be sort of a Manic Pixie Dream Girl, at first. She’s the popular girl, the mysterious one that seems to have spent most of her time carefully crafting a persona that is equal parts wacky and mysterious. She’s known for disappearing for long periods of time, so it’s not strange to a lot of people that she would suddenly disappear a few days before her high school graduation.

Except to one person.. our main character, Quentin Jacobson, thankfully known as Q which means I can cut down on the words a little bit. Q and Margo Roth Spiegelman (as she’s known repeatedly throughout the novel when someone is talking about her… never when she has her own voice) have been friends through most of their lives. The story itself starts when they’re younger, finding a dead man on the playground who Margo (I’m not going to keep typing out her name. I’ve made my point on that) describes as having all his strings “cut.” The string theme is going to repeat, pay attention.

The story picks up years later when the pair have drifted apart and are about to graduate high school. Q had is own set of friends… the computer nerd Radar and the school’s resident Quagmire from Family Guy, Ben. Margo has her own set of “friends” as well, as we learn one of them has been sleeping with her boyfriend, and she makes a surprise visit to Q in order to get revenge on her cheating boyfriend, the people who enabled the cheating, and make amends to the one person that she was mean to. Then, she disappears.

Naturally, Q thinks there’s something more to her disappearance, and sets off to find her. A good section of the book follows his quest to find her, including finding her hiding place in a run down old mall. His friends (and one of Margo’s eventually finds him.)

I started with the description of the Manic Pixie Dream Girl (which is shortened to MPDG, so I’m going to start doing that) because I think one of the central questions to the novel is whether Margo falls into this. She’s only in two sequences, in the very beginning, and then again in the very end. There’s not a lot of description as to why the Q/Margo friendship sort of collapsed, although the implication is there’s not much of a story behind it: they simply fell into different social circles as people do. But she’s very much the central character in the story. Most of the conversations center around her. The whole novel is a search for her. And she even had a handy life lesson to our main character, Q, who was of course uptight and obsessed with his normal life.

In the end, Margo is found, but it turns out she didn’t want to be found. She ended up vanishing because she was tired, and wanted to seek a different life. The thing is, by the end… can you blame her? She wanted to live a different life than her parents, her friends… she wanted to explore. She wanted to take full advantage of that life. Mostly, she didn’t want to be this ideal that the entire novel sets her up to be. I kind of feel that she was framed for most of the novel as the MPDG, but decided she didn’t want that for herself. The novel, itself, is one big character study about this girl who doesn’t appear in most of it, and we have to read between the lines to learn about.

Naturally there’s Q, looking for her because he has some kind of love for her. But as the novel indicates, he doesn’t know who she is. No one does, really. I think that’s kind of a bold choice for a young adult novel. It’s a reminder that we really don’t know what people are going through, and it’s a reminder that High School is a time when we are all figuring it out.

It would be easy to frame this novel differently. It’s broken up into several parts, with the last one broken up to their journey, racing to find the last trace of Margo before she vanishes forever. (It’s a long story, but it involves a Wikipedia type website, and her flair for the the dramatic…) It would be easy to frame the novel in just this sequence, as we have characters racing towards the object of the novel, each for their own reasons, on the cusp of their High School Graduation. (Technically, they’re all adults… but they’re racing somewhere unknown for no real reason). The novel builds towards this, and this is the quickest reading section because of how it’s broken down. But it’s a race to bring Margo back… to save her, when she doesn’t need to be saved. She needs to go her own way.

And that’s what the novel is really about. Going your own way.

There’s so much I want to say about this. I could keep going. Naturally the symbolism of the strings, there’s the sleuth-like way that Q finds everything, and Ben… I know everyone needs a friend, but seriously this novel might have been better off without him. Sorry, dude, you were obnoxious. Wow, I hate him. Just… seriously… took me out of the novel every time he was on the page. I kind of feel like John Green just needed an extra character to round out the cast? Maybe? Who knows.

I’d recommend this novel, especially for High School Students. I think it does have an important message about finding your own way, and you don’t have to follow the pack. Sometimes, the circumstances suck. Sometimes, it’s great. Either way, check it out.
Posted by Bad Shakespeare at 9:40 AM