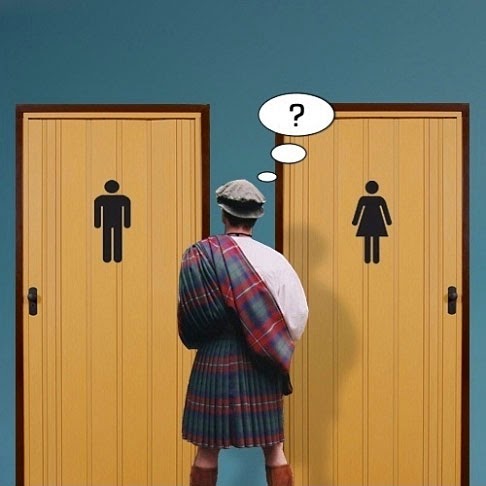 You’ll notice that I have titled these Wednesday updates about my trip to London as “Bad Shakespeare takes England.” That’s actually very specific wording. Despite the fact that I spent 99% of my time in London, I was encouraged to spend time outside of it as well. I mean... I was in the United Kingdom, after all. It’s basically an Island, although one not as creepy or confusing as the one on Lost. At times we did confuse the constant gray sky as the smoke monster, but that joke got old after a little bit.

And, because I was able to take trips all over the island... and yes, I was able to go over to “the continent” as they referred to the rest of Europe... I wanted to take advantage of it. The first trip I took was to Cardiff. I’ll talk about that one later, because I’m more excited to talk about the second trip I took, following a trip to the laundromat. (More on that later, too.) Because I was able to take a day and a half long trip to Scotland. Home of lots of things. Including Scotch.

Getting to Scotland from London is easy... they have lots of trains there, just not exactly like the ones on Harry Potter. They do have platform 9 3/4 there, but the line to get my picture taken was too long, so I settled for hopping on Platform 4, which is the one I needed to get from London Kings Cross Station to Edinburgh. It’s a nice four hour train ride that’s better than going through security and having to take another flight.

Four was enough. Thanks for that, Expedia.

In any event, I wasn’t really sure what to expect when I got to Scotland. Of course, the first thing to expect was nothing... I didn’t arrive until 11 at night, so it was mostly dark with a few cabs and people coming out of bars. I briefly walked walked around and considered going into a bar, but then I thought that wandering around a new place in the dark in a foreign country even if they speak what can loosely be considered English and going into a bar may not be the best idea, even in an area that can be considered safe.

Plus... I had to share a room my entire time in England. This wasn’t a bad thing because I liked my roommate. He was with a different program so I only saw him in passing since he did most of his stuff in the morning, and since I was there for plays I did most of my stuff at night. So we never had time to get on each other’s nerves. That being said, I was still sharing my space with someone, and when I went to Scotland I got one, glorious room all to myself. So I wanted one good night to enjoy it. And I did. And after a week and a half of sharing a room with someone at this point it was all I hoped it would be.

I woke up the next morning a bit late, and I decided to explore. That’s when I learned that there two real “parts” of Scotland... and there were a set of steps called “The Scotsman Steps” that took you up to the Royal Mile, which is like Bourbon Street but with more kilts.

Yes. There were kilts. Kilts everywhere. I don’t mean people wearing them, but kilts were sold almost like T-Shirts here. I guess that’s to be expected since you really think of Scotland containing Kilts, Braveheart, Scotch, and Sean Connery, but I was surprised to see how many places you could just buy a kilt.

For the record, I bought what is called a “novelty kilt” in that the real kilts were like, mega expensive and I was enjoying having “food” on a regular basis.

Speaking of food... the first thing I did as I stumbled out of bed and managed to tell myself I’ll have to start working out more once I walked up the Scotsman Steps was hit up a good place for food. Being “Scotland” I just walked into a pub for brunch because I was in Scotland and why not. I ordered the house scotch and of course, eggs and salmon. I came THIS CLOSE to ordering Haggis, but, well... at the end of the day I guess I’m not as adventurous as I thought I was. Here we are.

The scotch and salmon was so delicious I thought I was in some kind of magical land in which they specialized in both dishes. (That’s the joke. They are) Seriously, it was probably one of the best meals I have had in my entire life, and I once ate at a place endorsed by Gordon Ramsey himself. No one tell him. I’m afraid of what he might do if I say this place was better.

Sometimes when we make trips we spend SO MUCH time planning, we forget to just... wander. And by wandering, I found my way to a little comic book shop just off the Royal Mile. I was able to find a little cafe and sip some hot chocolate as it snowed around me. I walked all the way to the Castle, where it was still snowing and at that point I had about enough. I found a place to do a full scotch tasting (that’s going to be it’s whole own separate post, coming later.) And I met people, too. The little woman running the store where I bought the kilts and told me about this pub I just HAD to go to because it had the best chips in town. Or the bartender who guided me through a list of scotches. Or the guy running the sweater store I went to who let me know “the weather’s not always like this....” When I told him I was from Virginia he said, “I heard it’s colder there.”

But it was nice spending the day as sort of a tourist who wasn’t hitting up the touristy spots. I get that the Royal Mile is pretty much a touristy part... I could tell that when I hit up the fourth kilt store... but not really having a plan made it that much better. I was just there for the day. I didn’t have a set plan. I ended up wherever I want. I had a real adventure.

And yes... there was Scotch. We’ll discuss that one at a later date...
Posted by Bad Shakespeare at 5:00 AM