How Groundhog Day Taught Me The Meaning of Life 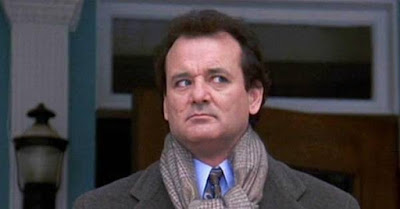 It’s obvious at this point, I love movies. They’ve been important to me since my father took me to a little movie called Ghostbusters and I can remember the first images of the lion statues appeared across from some scary music. It changed my life, actually.  And as an extreme lover of movies who regularly plans out what he’ll be seeing sometimes months in advance (Pride and Prejudice and Zombies, this weekend!) I often get asked, “What’s your favorite movie?”

To me, that’s a very complicated question.

My go-to is usually The Big Lebowski. How can anyone really not admire a movie so perfectly crafted around a guy who wants his rug back set in a noir world of fake kidnapping, evil Germans (one played by Flea), artists, con artists… the movie really has everything anyone could want in a movie. Endlessly quotable, set in the past when it was made so it never feels dated… just perfect.

It’s more complicated than that. I love that movie, but for terms of movie that is perfectly crafted while still managing to raise questions, I love Birdman. Is it all in his head? Was it real? Is Michael Keaton in love with fame, or is he showing how losing it can literally destroy you? Man. What a great movie.

I could go on. I love the chemistry in the recent remake of Man from UNCLE. Mad Max: Fury Road is textbook how you make a character driven movie set against the back drop of a giant car chase. Young Frankenstein, Shaun of the Dead, Hot Fuzz, and Dead Men Don’t Wear Plaid shows that in order to parody your material, you must first love it. The Man Who Knew Too Little shows us that Bill Murray can elevate any movie, unless it largely features uber-redhead Emma Stone trying to play an asian. I digress.

But to me, there’s one movie that stand out above them all as the movie that explains just how life words. It’s a movie that’s extremely special to me. And that movie, appropriate for today, is Groundhog Day.

If you don’t know what Groundhog Day is about… seriously? You don’t know what one of the greatest movies of all time is about? It’s about life. That’s what it’s about. It’s about a weatherman named Phil Connors, played deftly by THE Bill Murray, who gets stuck in a time loop on Groundhog Day. There he learns to appreciate his life. I promise you if you turn on the television, today, it will be on.

On the surface the movie is pretty simple with a message that’s about as subtle as the monster in It Follows. You have to learn to appreciate your surroundings, you have to learn to be a better person, etc. It’s a loud message, and one I wouldn’t normally appreciate in a movie because the message is so loud and in your face. By the time Phil is bringing pastries to everyone and playing the piano at a random couple’s wedding, it’s pretty obvious that he’s a changed man. And, according to the script, it only took 10,000 years. (The script had a lot that wasn’t in the movie. He was in the loop for 10,000 years, and he was there because of a witch’s curse. Again, this is how you make a movie: You know why it happened, you just don’t tell everything. You don’t, for instance, pan your camera across a bunch of people trying to have sex, then a happy family that’s out of danger, then back to a couple have sex. I apparently still have some issues with It Follows, and how it managed to fool everyone into people thinking it’s good. Another post for another day, I suppose…)

Yes, the movie is about Phil Connor, a weatherman so despicable but just redeemable enough that you like him. It also helps that he’s played by Bill Murray, who’s got a charisma that everyone should love. Now. If you don’t love his charisma, what is wrong with you? But the entire movie is about how he gets it wrong, for so long. When he first realizes he’s stuck in a loop and that “tomorrow doesn't matter”, he ends up in prison. He uses his abilities to rob, to mess with people… at one point to hork all the pastries in a diner like the end of the world was just around the corner. (Again, he had no tomorrow.) He even enters an existential despair and ends up killing himself, repeatedly. Because he keeps getting it wrong.

It’s that wrongness that is at the heart of the movie. Even as he moves into the idea of getting things right - romancing Andi McDowell in a way that doesn’t end in a hilarious slap montage - he’s still stuck in the loop, because it’s not about the one thing in his life that he needs to change. It’s never about accepting love into his heart, it’s about accepting himself. And it’s only through accepting himself and learning to enjoy his life that he’s able to change anything. But he can’t get there if he just learns his lesson, because the movie would be about 20 minutes long. And 20 minutes of Bill Murray is better than 20 minutes of no Bill Murray, it’s not what we’re supposed to focus on. We need to focus on those mistakes. We need to focus on what we’re doing wrong, but mostly…we have to allow ourselves to be wrong. We have to allow ourselves to make those mistakes that end up changing us. It’s not even about focusing on doing things wrong, it’s allowing ourselves to fail.

We live in a world where failure has bigger stakes than ever before. We live in a world where too many people are looking for our failures, and are rooting for them in an effort to destroy us in some way. We live in a world where it’s scarier than ever to fail… it gets broadcast everywhere! But we have to let ourselves fail. That’s the true message to Groundhog Day. The movie. No, the lesson of the day itself is that we listen to rodents who predict the weather because why not. But failure… failure is still the beautiful thing I keep telling everyone. If you want a movie about the real meaning of life, this is the movie to go to. We need to accept our failures, then get up the next day to “I Got You Babe” and keep moving on. It’s ok to be sad. It’s ok to let a setback hurt you for a bit. But at some point you have to put on those slippers, grab that rodent from the hole, and learn to love what’s going on around you.

For that, we thank Bill Murray. A teacher of all lessons.
Posted by Bad Shakespeare at 8:56 AM