It Follows: The Demon Represents Obviousness 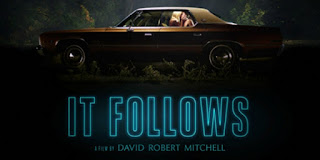 For those of us that have been paying attention, the critique of horror movies has taken an odd turn over the past couple of years. The best horror movies always tapped into some outstanding fear and gave it a form that was able to scare us even more, whether it be the “Foreign” fears of the 2000’s, or the fear of the stranger we couldn’t protect our kids from in Nightmare on Elm Street. Which, incidentally is why the reboot didn’t work as well, the fear didn’t come from Freddy Kreuger, rather, it came from the very 80’s idea of Stranger Danger. But I digress. That’s a post for another day.

It’s also why Jason X didn’t work, as we aren’t yet afraid of spaceships or cyborg versions of our favorite classic 80’s villains. Although I do expect the next Die Hard to feature a cybernetic Hans Gruber.

Lately, a pair of horror movies has come out that have been lauded as the best ever because they handle those fears in an interesting manner. They’re not just horror movies… they’re works of art! Apparently. See, the thing is I watched both of them, and I just didn’t see it. I felt that while the mood was certainly interesting, “horror” was replaced by “we’re going to beat this metaphor with a stick for a little while. Sit back and enjoy.” So, I’m going to use my big comeback post as a way to talk about at least one of them, and it’s going to separate me from a lot of people.

It Follows was probably one of the worst movies I’ve ever seen that was labeled “brilliant” in my entire life. Scary story? Sure. “Brilliant piece of filmmaking”? No.

For those of you who don’t know, It Follows tells the story of a ghost that’s sexually transmitted. You see, the ghost, or demon, or whatever… the movie is never clear in the one or two moments that it’s actually kind of ambiguous, follows someone around until it kills them, or until they have sex and then it goes and tries to kill the person they have sex with. The “it” simply walks, usually taking the form of a person. The only people that can see it are people that are infected, and it’s obvious that “it” is coming after you unless the movie narratively doesn’t want the main characters to know that it is coming after them.

It’s the story of a young woman, named Jay who is dating a boy named Hugh. One day at the movies, Hugh gets freaked out and naturally they go and have sex in a car. Hugh informs Jay that he’s being stalked by the magical sex demon, and now this sex demon… that walks everywhere… is now following Jay and she can simply get rid of it by having sex with someone else. He then dumps Jay, crying and in her underwear, at her house where she’s tended to by her sister Kelly, her friend Yara, (who is constantly reading on a device that looks suspiciously like a birth control container), and her dorky friend Paul that may or may not have a crush on her? What do we think? Think these two kids will get together one day? Who knows. The movie does, and the movie wants to let you know that they’re going to get together and you’re an idiot for thinking otherwise.

Anyway, after the rape metaphor… I mean, scene where Jay is dumped at the house, they go to find Hugh with the help of bad boy Greg, who’s introduced trying to have sex in the car with his own girlfriend as Jay flees the house from the “it” that is following her. They find him, then discover that he got “it” from a one night stand. You know, the more I describe what happens in this plot, the more I’m wondering just how this movie got the acclaim it did. I’m going to move onto the analysis.

It Follows is about yes… sexually transmitted infections and of course the stigma that comes with sex in general. You won’t be able to escape that theme. After the “what is she running from” moment that opens the movie that features a random woman running, in heels, for her life, it opens with our first shot of Jay in a pool, clad in all black and ignoring that everyone is going to be wearing jackets for the rest of the movie. And she’s being spied on by a peeping tom, trying to get a glimpse of her in her sexy one piece, all covering bathing suit. There’s already a contrast between the half naked woman that dies… almost in a sense one who deserves to die, because she’s naked and we know nothing about her… and the modest woman who is now in front of us.

But that’s all moot. It’s an intriguing premise that is ruined by the obvious metaphor that runs throughout the movie.

Let’s take the “it” itself. I don’t know what else to call it, since it’s never given a proper title, but “It” is subject to rules that are never really clear. When we can’t see “it” we know that it’s not moving very quickly as the young woman who’s first running from it practically has time to do her makeup before “it” catches up to her. And despite the fact that literally everyone knows who or what “it” is once they’re infected, the first time we’re really introduced to it… Hugh freaking out in the movie theater… it’s treated with calmness. He doesn’t understand WHY no one else sees the woman in the yellow dress that’s supposedly standing there.

Then there’s the treatment of sex itself in this movie. Clearly, the message of this movie is: “sex is bad.” A lot of people have been picking up on the idea that the stigma of sex is bad, but the thing is, I don’t see that message. It’s clear that sex, in this movie, is bad. When the characters have sex, they are pretty much clothed or covered the whole time. The only nudity that is scene is in the “it” itself, usually in a grotesque or horrible manner. Further, there are several incidents where sex is equated with parents, despite the fact that this is a world where adults don’t tend to exist. When Greg, the bad boy who spends a good portion of the time lusting after Yara before getting the chance to have sex with Jay (which is another problem… we’ll get into that in a minute) is killed by “it” he’s killed, literally by the image of his mother as she grinds on his crotch. The young woman in the beginning calls her father to apologize before she’s murdered. And in the end, it’s heavily implied that Jay sees the image of her father in the “it” while it is attempting to murder her with appliances despite being relatively invisible for most of the film. Parents are invisible in this film until they are around to explain the consequences of sex, which apparently is just an attempt to get back at them. Starting the film with a woman literally apologizing, to her father, for having sex is an odd choice.

But that’s all just part of the larger narrative that this movie wants to make sure you get this message of “sex is bad” repeatedly. Greg, the “bad boy” is introduced to us as nothing more than a horn dog, so when Jay passes the “it” onto him, it’s not much of a surprise. Much to the chagrin of geeky Paul… well, movie geeky, which means he’s still pretty awesome. But when Greg is killed by the image of his naked mother in demon form, Jay first sees “it” disguised as him, going into his house. This implies a sort of narcism that comes with wanting to have sex. Greg returns to Jay several times, trying to have more sex, and it’s implied for a little bit that the consider themselves some kind of  couple. The “it” doesn’t really come for Greg until Jay starts to show signs of rejecting him, pointing to the idea that sex is really bad outside of a committed relationship.

I could go on. The extended metaphor of the “it” being “sex is bad” extend throughout the entire movie, and as mentioned, never once lets up on this. I don’t understand how it is being praised when it is really less of a movie and more of a finger wagging lecture wrapped in a demon following people around if they give into their sinful urges. It’s not a subtle movie by any stretch of the imagination. It’s an obvious movie that spends two hours beating you over the head with a metaphor, just to make sure you get it, before the ambiguous type ending, which may only reinforce the metaphor that sex is only ok… in a relationship. The movie itself isn’t just a metaphor for slut shaming, the movie itself IS slut shaming in the worst possible way.
Posted by Bad Shakespeare at 8:35 AM No comments: