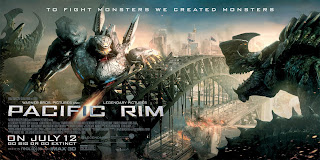 So... after months of watching trailers, scouring the internet for news, and shouting Idris Elba’s line “Tonight we are canceling the apocalypse” at ever opportunity, I finally was able to catch an early showing of Pacific Rim. The movie my childhood was made of!

For those who don’t follow this blog or movies that look exceedingly awesome, Pacific Rim is about giant monsters (named kaiju) that come from an interdimensional rift in the middle of the ocean, so naturally mankind responds by building giant robots called Jaegers, attacking them, and then turning the pilots into celebrities and the giant monsters (I’m not going to keep calling them kaiju) into jokes. The movie follows a washed out once great Jaeger pilot who’s brother was killed during one of these giant monster attacks, and his blah, blah, blah... you don’t really care much about the plot at this point.

Let’s face it, the movie isn’t great. It’s mostly a hodgepodge of action movie cliches (will the hotshot pilot and the has-been learn to work together to stop the monsters? Will the young woman finally be given a shot? Is that seemingly dead monster going to jump back to life and kill that guy?) that take up time in between watching giant monsters wail on giant robots.

But that’s not what you want to watch. If you walk into this movie hoping to see excellent acting or a “plot” then turn around and head into another movie. The only real reason to watch this movie is to watch giant monsters (designed by Guillermo Del Toro. That’s just more of the awesome) wail on giant robots. The action sequences are fantastic, they’re well shot and they avoid the most recent problem from other CGI heavy action movies where after about two minutes of fighting you can’t understand who’s fighting who. It also helps that the monsters are so different from the robots.

And because it’s Del Toro, the world is fully realized. He skips past all that boring “origin” stuff, and just thrusts us right into the action, but at no point do you feel you’re missing something or something is under-explained. It really adds to the overall feel of the movie, even if some of the characters are underdeveloped beyond the action movie cliche they fill.

But you know what? At the end of the day, it’s giant monsters wailing on giant robots. That is why you’re going to see it. It excels in monsters vs robots in every single way.
Posted by Bad Shakespeare at 1:11 AM