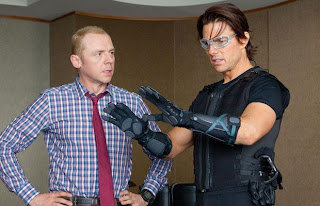 Mission Impossible: Ghost Protocol (named so you don’t have to see Mission Impossible 4, and therefor know it’s the fourth part and thus realize that Tom Cruise is old) is a movie built on failure. For most of the movie, Ethan Hunt (Tom Cruise’s) IMF Team, is mostly an annoyance to the bad guys. Through careful planning, they manage to facilitate the exchange of diamonds for Russian Launch Codes, be in the wrong place at the wrong time to convince people that the IMF force were the bad guys to begin with, and then the whole thing of course ends with them letting the missile launch. It’s really just at the last minute that they finally save the day.

Side note: I’d like them to remake these movies with Samuel L. Jackson. Then they could call it the BMF force. Look, I’ve been watching movies all day. I’m a little punchy.

Of course, none of this is our boy Simon’s fault. No, I place the blame on Tom Cruise. Mostly because I can. And he’s the leader. And a good leader takes responsibility when he’s out climbing the world’s tallest building for no real reason other than to show off the cool spy gloves that should be in a James Bond movie. But you wouldn’t get Daniel Craig climbing the world’s tallest building just because it was there.

It is nice to see Simon not just relegated to the roll of comic relief, though, even with this movie starring Tom Cruise, Tom Cruise’s love interest, the guy who’s going to replace Tom Cruise eventually, and Simon Pegg. I mean, most of the comedy comes from him, but he plays a pivotal roll on the team. He gets to enter Nicolas Angel mode and really kick some Russian Terrorist Butt. (fortunately, this movie returns the Russians to the role of the bad guys. FINALLY.)

Our Final Movie for the Thanks Mum, A Very Simon Pegg July 4th Movie Marathon: We take a little trek through the stars in our least Simon Peggiest movie of the day.
Posted by Bad Shakespeare at 6:32 PM