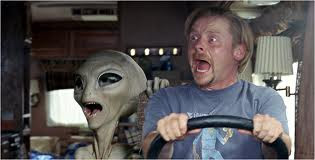 Aliens, Simon Pegg, Nick Frost, and Nerd References Galore! Paul is not an official part of the “Three Flavours” Trilogy (that wraps up this month with At World’s End. There’s a a 90% chance I’ll be in line to watch that. I don’t know. I’m watching a lot of Simon Pegg today. For you. The reader. You’re welcome.) but it’s an enjoyable look at what would happen if aliens made it to Earth, smoked a punch of pot, and then hung out with science fiction fans in a road trip across the midwest. Which is plausible, right? Aliens are going to come down, sound like Seth Rogen, and just hang out with the nerds. I hope.

Think E.T. by way of Pineapple Express. (Which is lazy, since Seth Rogen is in both. But I’m writing a lot of these today. I’m going to be lazy.)

I enjoyed this movie, which was written by Simon Pegg and Nick Frost without the aid of Edgar Wright. I haven’t seen it as much as I have his other works, and there’s just something that’s missing something. Maybe it is that Edgar Wrightness that Hot Fuzz had.  The jerk needs to just get started with his Ant-Man movie. Who knows? But it’s an enjoyable movie, and it’s rewatchable for the millions of different references to other sci-fi movies. I will ALWAYS laugh when Jason Bateman shoots his radio and says, “It was a boring conversation, anyway”. (I’m not telling you where that’s from. you should know.)

Great movie. Laugh out loud great, and again, you have the idea that the writers re-watched a ton of science fiction movies to get the little moments right.There’s a lot to love about Paul. As usual, Simon Pegg is hilarious, and of course he’s entrenched with Nick Frost in a pairing that just feels right. They obviously enjoy hanging out, and I’m sure even home movies of the two of them watching football (or soccer) are probably just as amusing. Sometimes it gets to the point that you want Seth Rogen to go away so you can just watch the two of them hang out for a little bit. Not that I have anything against Seth Rogen. I don’t want him to sic James Franco on me. I feel the two of them could take me.

But Nick Frost and Simon Pegg: I’d like to grab a beer with them. Or a pint down at the local pub. That last part’s funnier if you say it in a British Accent. Also if Aliens are attacking, like in that new movie they have coming out.

I have to say, re-watching movies for this marathon is fun, but it’s a lot different than the AMC Oscar Movie Showcase, largely featuring movies I hadn’t seen. Also there’s the sense of control that’s different, as 1) I get to go at my own pace and 2) I got to pick the movies, which means that, for instance, I won’t be forced to sit through a movie that features an old French Woman dying for two hours. Although, Simon Pegg and Nick Frost in a parody of Oscar Baiting movies. Someone get me Edgar Wright!

Next up: Lunch.
Then the one that started my love affair with Simon Pegg as he saves England, or at least his girlfriend, mother, and best friend, as they head down to a local pub to ride out the zombie apocalypse.
Posted by Bad Shakespeare at 1:06 PM