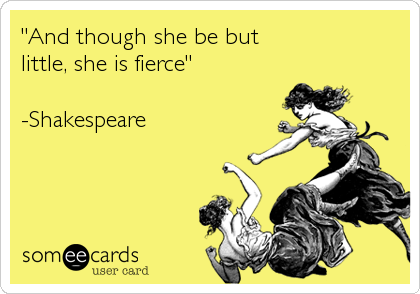 Yesterday I talked about why it’s perfectly acceptable to hate Shakespeare in a partial response to a Buzzfeed collection of words that attempted to make up a coherent argument against the Bard that was totally not trying to be controversial during his 450th birthday. Totally. I didn’t address the two arguments in the article, but rather talked about why it’s ok to hate Shakespeare.

The first of the arguments, “Shakespeare hated women.” Let’s talk about that for a little bit.

Back when Shakespeare was writing, women weren’t exactly viewed as equal to men. Women were a lower class, and couldn’t hold certain jobs, for instance, being able to act in the theatre. So, these women parts that Shakespeare wrote were actually played by boys - boys without beards which was actually a legit career back then.

Anyway, it’s difficult to blame Shakespeare for writing women as “weak” during a time when 1) his entire cast were men and 2) the attitude of the time was that women were, in fact, “weak.” Thankfully, we know better now and we have Gina Carano kicking some major Channing Tatum butt in Haywire.

But here’s the thing, remember a little play called Hamlet that dealt with a lot of father/son issues and featured two female characters, one was pretty much useless until she accidentally killed herself, and the other one was driven crazy because Hamlet didn’t love her? See, it’s believed that Hamlet was written right after the death of Hamnet... Shakespeare’ son. The whole play is believed to be written to help Shakespeare deal with the death of his son, and the father/son issues contained within.

Let’s look at which plays were written after Hamlet, shall we? King Lear. Macbeth. Coriolanus. The Tempest. Twelfth Night (performed right before Hamlet, not published until AFTER Hamlet). Oh look, all plays with strong females in them.

King Lear has a foolish father giving away his land to his daughters, who then start a war, equals among their husbands. Not only does it feature three strong female leads, but the weakest character, the most doddering, is an old man.

Macbeth... seriously I need to point out the strong female character in Macbeth? Really? Lady Macbeth is played as “evil”, yes, but she’s ambitious. She doesn’t want Macbeth to be king, SHE wants to be king. She’s one of the strongest female characters in literature, never mind Shakespeare.

Coriolanus is mostly manipulated by his mother. The mother/son dynamic drives a lot of this play. It’s not until he leaves his mother that he runs right into the arms of the enemy, where’s he’s then manipulated by them.

Twelfth Night features a woman who just wants to help a lovelorn Duke. Of course, the duke does ask that she not put on female clothes at the end, so that may be a completely different story...

These are just examples.

Following the death of his son, it’s believed that Shakespeare focused on writing strong female characters to set a good example for his daughter, Judith. He wanted to create a better world for her.

When exploring Shakespeare, or any writing, sometimes we tend to forget that there’s often a story behind what they are writing. Many writers, Shakespeare included, didn’t just write random things. They wrote about what was going on their life. I know I do it with this blog, even if it’s hidden. But there was a marked shift in the women in Shakespeare’s pieces following the death of his son.

So, before declaring that Shakespeare hated women based on one, most likely satirical play, maybe it’s best to explore other things that he has written.

Posted by Bad Shakespeare at 8:00 AM