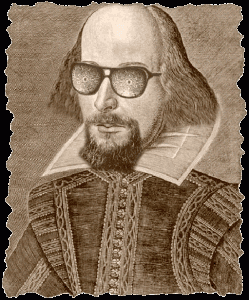 Happy Birthday, Willie S! Today is the 450th birthday of the bard himself, William Shakespeare. (Probably. We know he was baptized on April 26th, so we celebrate his birthday today.)

I’ve  been reflecting a lot lately on William Shakespeare, obviously. That’s been the theme of the month: The way this one writer has influenced countless writers that have come after him, the way that his work has been dissected and redissected, and how new information about his life is constantly changing the face of not only what we know about him, but the worlds that he left for us. This man is still changing the way we look at the world.

But what if it’s a little bit less than that?

Here’s what we know about William Shakespeare: he was a writer back in a time when writing and acting wasn’t that honorable of a profession. Some actor’s mothers would tell their Elizabethan-era bridge clubs that their actor-sons were thieves, but the best thieves on the blocks. Shakespeare didn’t really have to go through with this: he was pretty wealthy, invested his money wisely, and was a pretty well-known writer. We know he was popular - popular enough that 450 years later people are still mangling his works and he’s being studied not only by scholars but in high schools.

Take a moment to think about that. It’s one thing for Johnny Professor to study Mr. Obscure Writer You’ve Probably Never Heard Of like he was some kind of Literary Hipster, but Shakespeare is pretty much studied by High School students. Romeo and Juliet has been turned into kids’s movies. (Minus the whole “death” thing.) That means that Shakespeare, writing 450  years ago in a language that was actually considered lower class at the time, is important and known enough to be studied in basic scholarship...

But what if William Shakespeare just wrote for that reason... to write?

I’m not saying to just make money. He didn’t necessarily need it. We know he didn’t write to create brave new worlds (see what I did there?). Most of his work was largely reboots of previous franchises. But what if he was just writing to say something for himself, and left it there?

I like that interpretation of his work. Because then it makes his work more accessible to everyone. Think about it, we no longer have this great writer on a pedestal. We no longer have this writer who’s fame and work is no longer achievable by us, the great unwashed masses. We have a guy. A guy that just wanted to write. A guy that had something to say, and said it the best way he knew how: by just writing. By making his statement, and moving on. By writing his words down, making sure they get out there, and then leaving the rest up for interpretation for us.

Remember what I said before: William Shakespeare is studied in High School. He’s important enough to ensure that everyone must learn about him. And there’s no evidence that this is what he wanted out of life. It’s what we, the people who read his work chose for him. And it makes  his level of writing an achievable goal.

That’s the lesson I think we should all explore today, on William Shakespeare’s Birthday. I am asking all of you who read this today not to concentrate on William Shakespeare, the man today, I think you should focus on William Shakespeare and his accomplishment, and ask yourself, “why can’t I accomplish that?” Because there’s really no reason why we can’t achieve that. Profession sucks? Be the best you can in it. Want to write something but something similar was already written? Write it anyway. Have a point to make? Just make it. Leave the writing, art, or work there for people to interpret.

And that’s what you should be taking away from William Shakespeare. Not even necessarily his writing. But the accomplishments that are inside us all.

Happy Birthday, William Shakespeare.
Posted by Bad Shakespeare at 4:00 AM