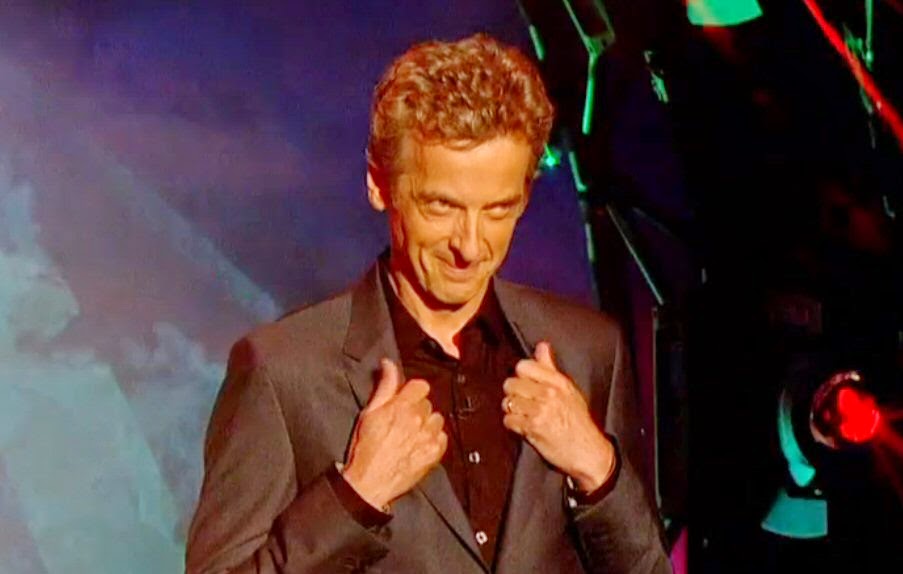 I’m a big fan of science fiction. It used to get a bad rap. A lot of people that are zooming around in their Iron Man costumes or walking around with their Star Wars Shirts don’t understand how difficult it was, for some of us, to admit that we enjoyed watching grown men and women talking about “reversing the polarity” or “beaming me up.”

Which is why for the longest time, I never really told anyone I was a fan of Doctor Who. For those of you who don’t know, Doctor Who is a television show that’s been on for 50 years, and has a lot of history, so I would highly recommend Googling “Doctor Who” before you read the rest of this, because it’s way too much for me to get into right now.

But no, when I was growing up, you could get away with having watched Star Wars… I mean, that was a bunch of epic space battles and wizards and light sabers. Plus, we heard there was a rumor that right now, as were studying for that math test, George Lucas was going to write three more movies and there was going to be an all digital character named “Jar-Jar Binks” and he was going to blow you away with his awesomeness. (We were young. We were naive.)

You maybe mentioned your love of Star Trek, but only briefly. Despite the fact that a new guy had taken over and would someday become Patrick Stewart, America’s favorite British Uncle, for the time being you didn’t proudly wear that Star Trek shirt too many places… The movies were cool, of course, but it was still an iffy level of nerdom.

Remember, Computers weren’t widely used when I was growing up, so the geek had not yet inherited the Earth. Most of the time you could get by with being at the mercy of the AV Club.

But way below those two things and the billions of science fiction books, video games, and roleplaying tabletop games: there was Doctor Who. You don’t get much more hardcore science fiction than an alien that flies around in a space ship and can go anywhere, anytime, ever, and was popular in England. That was a level of nerd that no one wanted to really cross, at least when I was growing up.

But I remember the first time I saw Doctor Who. It was Tom Baker. I didn’t quite know what was going on, there was a man in a funny scarf flying around in some of the stupidest special effects I’ve ever seen, on PBS of all channels, one lonely Sunday afternoon. But then he was being threatened. He didn’t pull out a gun or a weapon. He fought them off with a smile (a rather crazy smile) and an offer of some jelly babies. It was weird. But I liked it.

I caught up where I could, but didn’t really focus on one era for too long. I enjoyed what I could see of them. I watched the so-so 1996 movie, but I really started re-watching when Christopher Eccelson helped to bring it back. Then there was the era of the new Doctors… David Tennant and Matt Smith. I really enjoyed David Tennant, I’d go on to say that he replaced Tom Baker in my heart as “my Doctor” (and any good Doctor Who fan has “their Doctor”.) Up until, of course, the latest. The 12th Doctor. (sorta. Look, Google it, because the numbering’s all complicated now.)

Peter Capaldi was introduced to the world as the new Doctor, one of the oldest to take the part since it’s regeneration in 2005. (see what I did there.) He came with a little bit of controversy (because who can let things go without controversy) because he was older and he was replacing a very popular Doctor. Thing is, he’s already my favorite. I don’t know that he’ll replace Tennant or Baker as “My Doctor” but he’s already worked his way into my heart as my favorite Doctor. Not because of any action he’s done as the Doctor, mind you. But because of Peter Capaldi.

Oh, I understand that as of this writing, we’re only three episodes into his tenure as the Doctor. He hasn’t had a lot of time, really, as the Doctor, beyond telling a dinosaur that she was pretty, possibly pushing a robot to his death, and fighting Robin Hood with a spoon. (Actually I’d say he’s been pretty busy.)

No, I’m a fan of Peter Capaldi… because he’s a fan. He’s always been a fan of Doctor Who. In fact, when he was announced, people started looking at archives, and found that he’d not only written to Doctor Who fansites, but he’d drawn pictures, he’d written fan fiction… he was a fan from day one. He loved the Doctor. And now… with only 12 other (or 13, depending on how you count the Valeyard from “Trial of a Timelord”) people have officially played the Doctor over it’s 50 year history. And he gets to be the 13th. (or 14th. Again… Valeyard. And I’m including the War Doctor. John Hurt counts.)

Think about the odds with Peter Capaldi being cast as the Doctor. Not only has he already been on Doctor Who (squaring off against the 10th Doctor and Donna Noble for control of the TARDIS) but he’s about 30 years older than Matt Smith when he took the part. Matt Smith was wildly popular, and every pretty much assumed we’d be getting another younger, edgier Doctor. And instead we get this guy. An old guy best known for being on a show about political intrigue where he got to yell a lot of obscenities. Like, a lot. I can remember some armchair commenters warning people against Googling some of his earlier performances.

But how can you not appreciate the fact that this guy, this fan, is now living his dream. He’s getting to play the big part. He gets his own wardrobe, he gets to wave the sonic screwdriver and command attention. He gets to play a role that he admired for years… and now he gets to do it.

There’s something kind of important in there about following your dreams, and to keep reaching, I guess. I mean, at the end of the day, I kid of just enjoy the funny quotes and the fact that at any moment, anything can happen. (David Tennant once smashed into the space Titanic. Also there’s a lizard woman and a human woman who are married and have a detective agency in Victorian England. Anything.)

Good luck, Mr. Capaldi. It’s not often that one fan gets to say to another: good luck, I’ll be watching in this context. But Good Luck. I’ll be watching, every week.
Posted by Bad Shakespeare at 5:00 AM

Email ThisBlogThis!Share to TwitterShare to FacebookShare to Pinterest
Labels: Doctor Who, Fans, Following your Dream