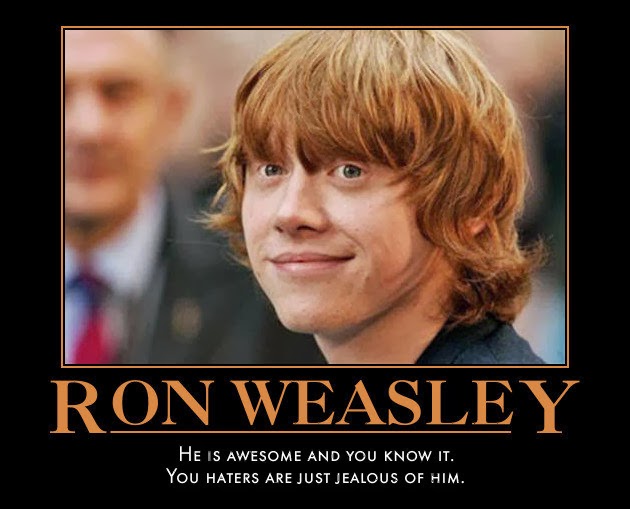 Recently, J.K. Rowling spoke about Harry Potter, because what else would she talk about, and announced that she regretted getting together series hero/token ginger Ron Weasley and series heroine/resident know-it-all Hermione Granger. This announcement which stunned the Harry Potter world, despite the fact that the last book came out 7 years ago, and the last movie came out three Paranormal Activities ago. (I used to measure time in Saws, but sadly the Jigsaw Killer retired. Or died several movies ago. I can’t follow the plot, like everyone else, I tuned in for the last five minutes.)

Naturally the world was stunned. They were just SO CUTE together. At least in our minds. And Rupert Grint and Emma Watson weren’t to hard on the eyes, either.

I’ve discussed author intent before, particularly with you Hobbit haters that don’t understand that more Martin Freeman is never a bad thing, especially so he can become famous enough to carry even more Hitchhiker’s Guide movies. But this is a bit unique, as it was a major part of the books, and while not obvious became sort of an organic part of the book series as time went on. I find it hard to believe that Hermione would end up with someone as reckless as the titular Harry Potter, and not someone she could feel superior to, like Ron.

That’s neither here nor there. J.K. (mind if I call her J.K? We’re both writers after all. She’s written a series of 7 books that changed the way people thought of young adult literature and made literally more money than the queen of England, spawned an 8 movie series, countless merchandise, and a theme park. I write a blog that’s seen by literally dozens of people a month. We’re practically colleagues.) ahem, Ms. Rowling has the right to regret whatever she wants. She can even go back and change some things if she really wants, and suffer the ire of fans. She wouldn’t be the first. The most famous, of course, is George Lucas and his constant tweaking of Star Wars, because if something is a classic we need to add in more explody lasers, droids, and Greedo shooting... nope. I refuse to finish that sentence.

Then there’s the granddaddy of all edits, J.R.R. Tolkien, who decided that the happy little magic ring that the happy little hobbit picked up on his happy little journey was actually a harbinger of doom and actually going to destroy the lives of whomever it touched. He actually started re-writing it before just deciding that happy story was the influence of the corrupting ring.

Don’t get me started on Stephen “Dark Tower” King.

But knowing this, going back to the story, does that change anything for us? Does it change for us now knowing that the author dislikes part of the story that quite frankly, all of us like? Other twists were mentioned in the last book (Spoilers for a book that came out back before Jared Padelecki had only long-ish hair on Supernatural.) such as Snape being THE good guy in the book, Dumbledore using a cursed magic wand, and a little piece of Voldemort being with Harry the whole time. Also, J.K.’s... Ms. Rowling’s other revelation that Dumbledore preferred the company of men. (Which, when looking back, was kind of obvious.) Do these things change how you feel about the book series?

For me, it doesn’t. (The twist things do a little bit. I like Snape more than I did before, but I never thought he was truly evil. ) Ms. Rowling can discuss whatever she wants, but at the end of the day she wrote Ron and Hermione hooking up and making even more little Weasley’s running around, because we need more of those. (Sarcastic Eye Roll. It was like a plot device at the end... they need help, let’s find ANOTHER Weasley!) I suppose she could have ended up with no one, or even her wizard-college crush that she ultimately left Ron for after she realized that the fun and excitement that drove them together while they were hunting trolls or cursed rings or whatever wouldn’t last. (Unless they had more adventures at Hockwarts, which is wizard college they all went to that I just made up. J.K. - call me.)

But the ended up together. Nothing  - including author’s regret - can change that.

Besides, I was happy to see that Hermione ended up with the real hero of the Harry Potter series: Ron Weasley.

What’s that you say? Sidekick you say? Stop asking questions on a blog and get to the point, you say?

Sorry, got a bit carried away.

Ron Weasley was the hero of the Harry Potter series. Fact: in the first book, Harry wouldn’t have passed the chess game if not for Ron. Fact: Ron provided a place for Harry to stay when things got rough. Fact: Ron was Harry’s guide to the wizarding world. Remember, Harry knew exactly two things about wizards before he became one: Jack and squat, and Ron, who could have taken advantage of this famous, wealthy, naive kid, didn’t. Harry would have been killed repeatedly if Ron hadn’t taken that spell repeatedly. And in the last book, who was drowning and who jumped in to save him? Yeah. that’s what I thought.

So, raise a glass. And re-read your Harry Potter books with the firm notion that it doesn’t matter who regrets hooking up with whom, your favorite couple: Hermione and Ron. The writer can regret whatever she wants, at the end of the day, this couple got together. And we get to enjoy it for what it was. Until we get Harry Potter: The Special Edition, in which Nevill is replaced by a robot.

Now to get started on Harry Potter and the Admissions Officer.