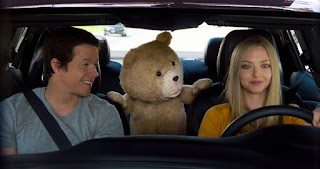 Ted 2 continues the story of John, (Mark Wahlberg with his thickest Boston Accent) and his Teddy Bear, Ted (voiced by the silver tongued and in this case once again heavily Boston Accented Seth MacFarlane) who was magically brought to life by his wish as a child. Not back is Mila Kunis, who’s pregnancy forced her out of this movie, but who’s presence is felt in the fact that John is depressed for a large portion of the movie. She’s replaced by Amanda Seyfried, playing a lawyer named Sam Jackson who… I’ll get to that.

Ted finally marries his longtime love, Tami-Lyn, and in an extremely dark opening that doesn’t remotely match the rest of the film, they quickly devolve into a constantly fighting, real housewives type family. Seriously, the beginning was so incredibly dark I thought we were going to jump to a joke that it was all a set up for a reality show, which, let’s face it, would probably have happened if a talking sentient teddy bear ended up marrying anyone. Ted decides that the best way to solve everything was for them to have a baby, first from a sperm donor (which does lead to a pretty awesome Tom Brady Cameo) to having John donate (do you think it leads to hijinks in the Sperm Bank? It leads to hijinks in the sperm bank) and finally adoption. However, this plan is ruined not because of hijinks but because Ted’s legal status as a “person” is in doubt.

Why these doubts never come into question when he’s a local celebrity, or when he’s getting married, or when he’s kidnapped in the first movie is never answered.

Anyway, what follows is a legal battle: Is Ted a person? Even if he is property, isn’t he technically John’s Property that he can do whatever he want with? Will Sam and John fall in love? (Yes. Yes they will. I’d say spoilers but come on. Have you ever even WATCHED a movie?) Which celebrities will cameo next? And what about the sub-plot with the President of Hasbro and the creepy guy from the first movie that’s clearly not put in to pad time? Just what will happen next?

Ok, let’s start with some spoilers: Some of the funniest moments in this movie do involve the bevy of celebrity cameos, particularly Patrick Warburton and Michael Dorn, lovers who show up at a comic-con fueled ending that have them dressed, respectively as The Tick and Worf. The funniest cameo goes to Liam Neeson, as… well, Liam Neeson, who just wants to buy a box of Trix. When superlatives comes around, I’ll find a hard time listing anything else as “funniest” as the line of questions that come out of his mouth.

The problem is that the movie relies way too heavily on these celebrity cameos. Every time the script veers off into something workable, it gets distracted by having, for instance, Tom Brady show up. It offsets the very real problem presented: Tami-Lynn and Ted want a baby; with cartoonish sub-plots. Yes, it’s great to see Michael Dorn messing around Comic Con dressed as Worf, but when there’s a real threat of Ted missing and losing all hope in becoming a person, this cameo distracts from all the emotional beats we just witnessed.

This also points to the larger problem of the retread of an old plot point: why is that creepy guy trying to kidnap Ted again? If you’re worried they forgot about his kid, let me assure you: They did. He’s not really mentioned. Or acknowledged. This time with the help from Hasbro! It just brings us back to what we saw in the first movie, with the same type of danger in a movie that didn’t need danger, it was trying to be a legal drama. Ish. As much as it can be with a talking Teddy Bear.

The real problem with Ted 2, and what I think has been bothering me is the plot. The first movie was hilarious, mostly because everyone just sort of accepted Ted as a person. He was wished to life. There was a media circus around it. Then the media circus left, and he could do things like drive, or bum around with his friend, and no one really questioned it. That was most of the humor. At it’s core, it was a movie about a kid with his favorite toy that grew up with him, and everyone just said, “Sure, why not?” in the world of the movie. The problem with the sequel is that it removes everything that made the first movie that much more charming. No longer are we just dealing with this fun thing, there are real dramatic stakes: Ted is not a person and everyone is questioning his status as a person. To be honest with you, it took me out of the movie from the get-go; because this fun thing is now being questioned when we really didn’t need any answers.

There really was a lot of potential for Ted 2. I’m sorry to see it wasted on this movie, really. We don’t need the seriousness. We don’t need to question whether Ted is a person or not, because he’s a talking Teddy Bear that just wants to hang out with his Thunderbuddy. if we could get back to the core: Just two buddies hanging out and no one really questioning the fact that one of them is a Teddy Bear, I think I could get in for Ted 3. But most of the fun of the first one was getting past the funny premise, and just accepting it. Constantly calling attention to it just isn’t as fun.

Five out of Ten.
Posted by Bad Shakespeare at 9:47 PM