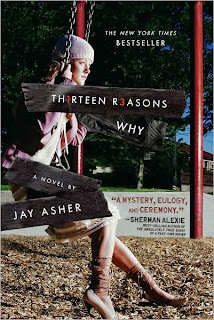 
I’ve read plenty of banned or challenged books. Not by design, of course. I don’t search them out, it’s just that a lot of people are attempting to ban books lately, so it’s never been easier to find a ban book... go read one today.

One of my absolute favorite banned books is Jay Asher’s 2007 young adult novel Thirteen Reasons Why. (sometimes it’s stylized as Th1rteen R3asons Why. I’m not going to spell it this way. All due respect to Jay Asher.) It’s about a high school boy named Clay Jensen that comes home one day and finds a package full of cassette tapes (kids, ask your parents) from a girl named Hannah Baker, a girl in his class who recently killed herself. The tapes are her suicide note, describing the 13 reasons why she killed herself. Anyone who gets the tapes is one of the 13 reasons why she did it. From this point, the point of view goes back and forth between Clay, dealing with the fact that he’s on the list, and Hannah, describing from beyond the grave as to what happened.

This obviously is a heavy, heavy book. One of the main characters has committed suicide, and yes, they are some big reasons. (To tell you too much would be to ruin too many of the surprises and take away some of the impact. I’m not being vague to be obnoxious. I keep mentioning Klingons to be obnoxious.) But the moral of the story is a fantastic one: How we treat each other matters. Or how we don’t treat each other matters. It’s a good message. An important message that is even more important in today’s world when it’s really easy to just dismiss someone quickly in a text, Facebook message, or other way that has yet to be invented.

How you treat people matters.

Of course, this is all told in the heaviest way possible. I’m not going to go out of my way and say that this is a happy go-lucky-feel-good-yay-for-the-world book. (Which seems to be the only one the Book Banners want kids to read. Then they complain when they’re not equipped to handle the real world. IRONY!)

Books like Thirteen Reasons Why (or Th1rteen R3asons Why... it’s growing on me) are part of that literature that takes a look at the human condition and how we interact.

I look at books like this as the reason why kids should read things that may make them initially uncomfortable. This is a deep book, one that makes you think. I’ve talked about a lot of other books on this blog, some great because they’re right up my alley when it comes to monsters and demons, like the Mortal Instruments Series. (I still hate Simon. So. Much.) Some are great because they are well-written pieces that make me reflect on my own moments, like how taking the elevator is a sign of weakness, like The Fault in Our Stars. Some are good because I like the storyline, but could be better written, like the Road to Woodbury, which was still freaking awesome, The Walking Dead returning to AMC this October following Breaking Bad. (This paragraph brought to you by Carl Jr’s. ) But this book stuck with me. I can’t shake it.

Now, I read this when I was in my 20’s. The most recent thing I’ve been banned from doing was renting a car, and for a brief time in my late 20’s, quoting Doctor Who. I may have gone a bit overboard. So really, I wasn’t in any danger of not reading Thirteen Reasons Why. So to get myself in the mood for writing this post. I was thinking of how I would feel if I was told I wasn’t allowed to read this book, because of many of it’s heavier themes.

Ok, I mentioned earlier that I wasn’t going to talk about spoilers for this book, but as I go on, I’m realizing I can’t. So, spoilers follow. Think of this as analysis an not review. The whole point of this book is that Clay was the only one nice to her, and she wanted him to know that. He wasn’t a “reason” for something he did, but for not doing something. Hannah was sexually assaulted at a party. No one was willing to talk to her about it. She had nowhere to turn except a bottle of pills.

And that’s sort of the point I’ve been talking about for most of Banned Books Week. Banning books like this, because a girl is assaulted and can’t talk to anyone about it, ONLY CONTINUES TO CAUSE THE PROBLEM. By telling kids that a subject is so taboo that we have to ban it, we’re telling them that they can’t talk about it. Then they don’t feel they have a place to go. Then we have a ton of Hannahs, all because it’s easier to push a subject away rather than talk about it.

I keep making this point. This is an important point.

We can’t cut off access to books like this. Yes. It’s difficult. I put it on the list of fantastic books I look forward to never reading again. (but I probably will. And it will be in one day.) But it’s important that we don’t ban subjects. Sometimes, it’s easiest to connect through people with books, and we have to remember that we need to remain open to discussing these things. It may be unpleasant. But that doesn’t make it any less important.

Whew. One more day to go. I promise tomorrow’s post is going to be a bit lighter than this.
Posted by Bad Shakespeare at 4:00 AM