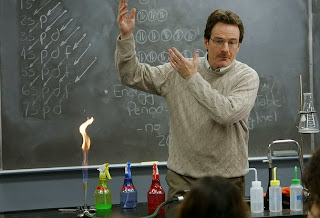 “The whole thing felt kinda shady, like morality wise.”
Skinny Pete, wrapping it all up for us.

I’m going to start this wrap up/analysis of Breaking Bad (And Breaking Bad Shakespeare) by saying... “wow.” There’s not a human being alive who didn’t think that this show wasn’t going to end with Walter White going to that big Meth Lab in the sky (or down below... he’s cooking the purest meth for Satan now, I guess) but I don’t think anyone could have called it exactly like that. Let’s get this out of the way: I thought his was a fantastic series finale.

Some of the debate seems to go around the idea that Walter White... Heisenberg... “won” despite the fact that he now has newly ventilated lungs. (It was one of those TV “vague shots to the midsection that could be a flesh wound, could mean he’s going to die” sort of things. I’d like to think it pierced is cancerous, cancerous lungs.) The thing is... Walter White didn’t win at all. Heisenberg won... his blue meth is off the street. Walt lost while winning, the grand tradition of tragic Shakespearean heroes everywhere.

First, let’s tackle how Walter White lost tragically. There’s a reason he started cooking meth: To save for his family. Walt was never going to fight to stop the cancer, he was never going to do battle, he was in give-up mode from day one. Make money, give it to his kids, bam. He took treatment when his wife turned around, made it about her, and then he was making money to pay for cancer treatments AND saving for his kids’ future, since he truly believed that it was futile. (This was before he was “good at it.” We’ll get to that line in a moment.)

Walt lost because he’s not giving his kids anything. Remember when Walter, Jr. “Flynn” set up a web page to save his father? Remember the outrage when Saul suggested that Walt launder the money through that? Remember when Walt didn’t want to be handed a job at Grey Matters because he had to earn it for his kids? Yes, Flynn won’t accept money from his father, so this the roundabout way he gives it to his kids, etc. But he loses out on the recognition. He loses out on the ability to say, “I provided for my family.” It was never about the money, and it wasn’t about the meth to start, it was about Walter White: hero to his family. Yes. Gretchen and Elliot will make sure Flynn gets the money. But Walt doesn’t get to say it was from him. It’s actually one of his worst nightmares.

I say this in the grand tradition, because other Shakespearean Tragic Figures have won by  losing like this. Claudius is exposed about 10 second before dying, after which Hamlet can go to his grave knowing that he won. Macbeth was king, and he did win... he didn’t lose his kingship to anyone woman born, nor until the trees of biram moved, which I’m sure comforted him for the 10 seconds his brain was still alive after it he was beheaded. King Lear learned his final lesson after his beloved daughter is killed. I put Walter White in this category. His pride got him into this situation. It’s by putting his pride aside that he’s able to achieve his goal of providing for his family.

I was glad to see Jesse escape not just captivity from the Nazis (without having to resort to any bad language) but from Walter White. Had Jesse taken that moment to kill Walt, it would have meant he was trapped with him forever (alive for dead) but he was finally able to break free by NOT killing him. (He did see the blood, but at that point it meant nothing. He knew Walt was dead, but he wasn’t going to be the one to do it.) Personally, I felt that was one of the greatest moments of the show: Jesse finally free from Walter White. Jesse able to go make his own way.

The finale was full of little character moments like this, but I like that they were all framed around Walt. This is very much Walter White’s story. I’m glad they didn’t overplay Marie... just had her offer a word of warning to her sister. I’m glad we saw Holly, Flynn and Skyler again, but it was a nice reminder that their story ended back when they threw Walter out of their lives. (I know it’s television, but either Walt turned into a lot more of a master criminal than we thought, or the agents keeping tabs on her home weren’t very good. I do like the fact that Skyler didn’t immediately turn him back in.)

The appearance of Badger and Skinny Pete was excellent for a few reasons, not the least of which being that it was a reminder that Heisenberg was a legend. I think that tended to fall flat for a bit in the final seasons. He was, as Hank (RIP) said, “A meth chef.” It’s also a nice call back to the start of the show, when they didn’t have the resources or the connection to call in an army to invade a compound, or to hire hitmen, like Walt was trying to do last episode. Gretchen and Elliot got taken by a pair of burnouts with laser pointers.

There were a few moments that fell flat for me (as with anything, really.) I really thought the final phone call from Lydia was a bit much... I would have much rather seen her coughing and get the implication that she was poisoned. The whole Gretchen and Elliot scene seemed off. Don’t get me wrong, I loved the casualness of Walter, strolling up to the door and his casual conversation. But I feel Walt needed more of a push against them. It was the two of them, dismissing him that caused him to spring back into action. Remember what I said before about losing his legacy? Here’s the physical representation of people that took it away from him. They didn’t have to die, but I just wish he had done more to address the fact they downplayed his involvement, even if he “understood why.”

Then there’s Walt’s admission. I both loved and hated this scene. Talking to Skyler, he finally admits what everyone figured out since the time that he was noticed for his meth-cooking abilities, that he liked it, and he was good at it. I’m glad that the writers showed that he acknowledged it... he did this because he enjoyed it. I almost wish they found a way to incorporate it better. I almost feel that the last scene of the series, Walt walking through the meth lab before the police come, dying, shows this off better than anything that Walt could have said.

Let’s talk for one moment about Walt’s final act of redemption, shall we? I suspect that Walt’s original plan many not have involved saving Jesse, rather making him part of the bloody tableau that ended the show. Yes, it’s last minute redemption to remind us that Walt was never the ruthless drug kingpin he wanted to be. (Also, really, at this point what would killing Jesse serve?) It was immediately made a little selfish by the fact that he wanted Jesse to finish the job, to kill him

That last scene... I’m obsessed with last scenes. Even if I don’t watch a show, or I’m not interested in a book, I’ll do what I can to find out how it ends. I like thinking about the final image that a book or play or TV show will leave us. Last scenes are hard, though. Take Star Trek: The Next Generation. Personally, I hate the final scene of the series, because it wasn’t really. It was just waiting for them to head to the movies. Deep Space Nine, with Jake staring out the window... that to me is one of the finest final scenes a show has ever done. Obviously, with this show I was much more invested. This was a final scene. The deposed King, dying not with his family but in the place where he was truly great. This is up there in final scenes of a show, even if you didn’t enjoy the rest of the show. (and I know that some people didn’t enjoy it. That’s their right, even if they’re wrong.) But also, did you catch the way that Walter was wearing a green shirt and khaki pants... the same thing he was wearing in the first episode, when this all started.

Ending the show the way it did... with Walter dying in a meth lab as the result of a self-inflicted accidental wound... ranks it up there with the great tragic heroes of literature. I’ve made this point many times, and I’m going to make it again: Breaking Bad should rank up their with great literature. It needs to be rewatched, studied. We’re going to need to discuss this for years to come to catch the symbolism. I enjoyed it. And I look forward to watching it again.
Posted by Bad Shakespeare at 6:23 PM