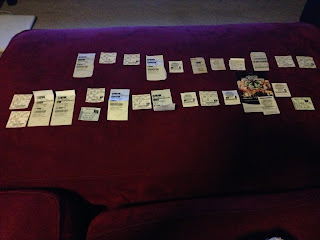 Every movie I’ve seen this Summer movie Season, laid end to end, with the exception of one. I’m missing the ticket from my second viewing of Man of Steel. If you find it, please contact me.

Sadly, Summer Movie Season has come to a crashing close with Getaway. I did not see it, (yet) but young Disney Starlet Selena Gomez playing a carjacker as Ethan Hawke, Race Car Driver follows the instructions of a personless voice to save his wife practically screams, “GET TO A MOVIE THEATER NOW”. It also screams that it’s the exact opposite of Iron Man 3 in that it will lack some of the “pew-pew explosion pow” that makes it a true Summer Blockbuster. No, I ended the summer with a spectacular friend (it’s the same friend as Mortal Instruments, so I need to come up with new superlatives each time) accompanying me to Closed Circuit, which was actually a decent movie. That starred Rebecca Hall, same as Iron Man 3! Hey, the loops been closed! (It also starred Eric Bana, and I feel I deserve a prize for never once leaning over to my friend and saying, “oooh.. .he’s getting angry in this scene... you wouldn’t like him when he’s angry.) 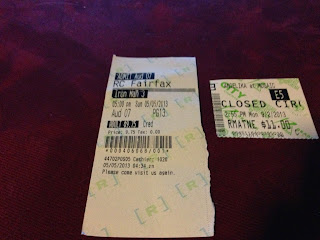 Summer Movie Season, the bookends. Considerably less men in Iron Suits in last one, but the first one had WAY less wigs worn by lawyers.

Overall, I went to the movie theater 28 separate times this summer. Of course, the number of movies I’ve seen all depends on your math of it all. While I have 28 tickets, I saw six movies twice: Pacific Rim, Star Trek, Man of Steel, Mortal Instruments, and Iron Man 3. Why see them twice? Because they were awesome. Particularly Pacific Rim, which had the dual appeal of giant fighting robots, Charlie Day playing a scientist, AND Idris Elba yelling cool things about stopping the Apocalypse. I swear, I’d watch a movie that was just him screaming things at people. Which was most of this movie. So I guess I did! Twice! Score! 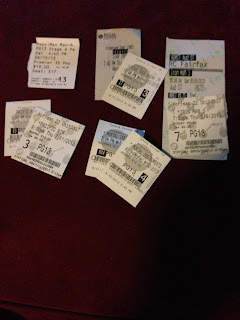 See how sad the one Man of Steel Ticket is without his brother? Also, the size difference between the two theater tickets for some reason?


The Math is further complicated by this little gem: The Cornetto Trilogy! All three movies: Shaun of the Dead, Hot Fuzz, and The World’s End, three fantastic movies on one glorious ticket. And lanyard. And T-Shirt. Unlike some OTHER people that went to a marathon and didn’t get a ticket. (I’m like 90% sure he doesn’t read this blog, so that line may be for naught. But it made me feel better.) The first two were released years ago, and you’ll remember I watched them in the “Thanks Mum” Marathon over July 4th, but watching them in a theater full of... well, people like me... made it that much more worth it. There was line quoting, there were standing ovations, there was a lot of nerd rage at the casting of Ben Affleck as Batman (more on that next week)... but it was an experience. Honestly, one of the best experiences I had this summer at the movies. 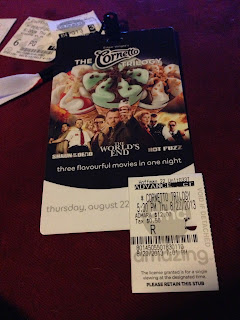 So.... I’m sure the question you’re asking yourself right now, other than when is he going to show off that sweet shirt, is why do I do it? Why do I go to the movies this many times... 28 times is more than there weeks in summer meaning I doubled up some weeks (Hell, I doubled up some days... swearing again to generate more controversy. Is it working? Do I have to twerk yet?) and more buttered popcorn than it’s probably safe to smell, much less consume?

I love movies. I love bad ones. I love good ones. I love ones that make you think. I love that for two hours I get to get lost in the world of someone else. I get to get lost in a world that doesn’t exist here. Plus, I get something out of it. Its weird and cliche, but I do learn a little something out of each one, even if it’s that Tatum Channing is funny. Sometimes, it’s deeper than that, like with The World’s End, which was a hilarious movie in it’s own right, but it also had a deeper meaning that I took away, and I want to go watch again.

There’s also the shared experience. Some people have told me, “hey... don’t go to the movies with someone. Don’t sit in the dark for two hours, you’ll get nothing out of it!” Do them I say boo! BOO, I say! That was redundant. But movies allow you to share a world with a friend. Indeed, I had three friends that accompanied me to the movies this summer (well... we went TOGETHER... but it’s my blog, so it’s my narrative) and I have fun quoting the movies with them, leaning over and making some joke (I’m still ashamed I didn’t make the Hulk joke at the last movie) or sharing that moment that made the movie worthwhile, even if it was the fact that the movie was terrible and we’ll never mention it again, ever. (It was great that they only made two Hangovers, right?)

Anyway, as a way of wrapping up and appeasing the God of Movies, Joss Whedon, I present to you my Summer Movie Season in a Nutshell.

In Memoriam: The movies I didn’t get to see because they were gone that quickly. We’ll miss you, RIPD (aka Men in Black with Ghosts.) The Lone Ranger could also be described as the only person in the theater, watching you. And Independence Day 2 is looking a lot better to Will Smith right now. But I’ll catch you all on DVD... I’m sorry I don’t have a movie stub for you.

Biggest Surprise: This one is a twofold... The first was that the Great Gatsby was so good. Look, I’m a literature guy, so I was bound to see it. I was surprised by how much I wanted to KEEP watching it, repeatedly. Honestly, had I not seen the last showing, I’d probably go back right away.

The second big surprise is how much the Hangover 3 suuuuuuuuuccccckkked. Worst movie of the summer, and this is coming from someone who says that John Goodman makes everything better. But they took a funny premise and it was clear that most of the co-stars were just sort of coasting.

Worst Use of an Accent: Jodi Foster in Elysium. Still not sure what she was supposed to be, actually. Elysium wins a second award this summer for Worst Allegory, which didn’t even try to hide it’s message in the story or the plot, just sort of... told everyone what it was thinking. Which isn’t bad, it was just... disappointing. (90% sure not reading friend, who loved it would disagree.)

Best “Bad” Movie of the Summer: I was surprised more people didn’t enjoy the Olympus has Fallen 2: Die Harder, but I loved it. It was an excellent cheesy throwback to buddy action movies, just one of the buddies happened to be the President, and the other one happened to look better in a while tank top. But the hostages, the betrayal, the James Woods, the action... I think history will be kinder to it. Of course, the Irishman managed to do the same thing without help from the President, so I’m not sure what message it’s sending to our children.

Favorite Movie of the Summer: This... this is something I always play out in my head. This is the moment I look forward to, thinking back and trying to pick out my favorite movie. The thing is I can’t pick based on the movie itself. I just can’t, because of what I mentioned: I don’t just enjoy the movie, it’s the experience. So with that note, I have to go with...

Hands down, a great movie. The third part of a loose trilogy, so I was saying goodbye (sorta) friends, but I also managed to share it in a setting that will probably never be replicated. It wasn’t just the best movie of the summer, but it was one of my favorite experiences of the summer.

So, that’s it. Say a closing prayer to Joss Whedon. We’re headed into Prestige Season, which means many of these movies will be part of the Oscar Movie Marathon, which I will be part of next year, and then of course the post-January Movie Dumping Ground Season, which produces some of the finest films worthy of the name Nicolas Cage.

I look forward to doing this again next year, Whedon be Prasied!

Posted by Bad Shakespeare at 9:21 AM