Book vs. Film... But What if the Book is Really, Really Special To You? 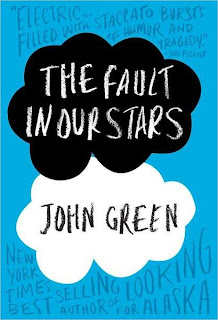 Recently I heard all about how Spiderman taunter/John Carter alien helper Willem Dafoe had been cast as Peter Van Houten in the film version of The Fault in Our Stars. (Henceforth known as TFiOS, because that’s how the cool kids shorten it, and it’s a long thing to type.) My first reaction was: “Cool, because he’s probably the embodiment of that character in the book.” My second reaction was: “Wait, they’re making a TFiOS movie?” (Also, at that point I called it The Fault in Our Stars because I didn’t know about the cool shortening acronym yet.)

For those of you who don’t know what TFiOS is about, beyond the fact that the title comes from the great line from Julius Caesar, “The Fault, dear Brutus, is not in our stars but in ourselves, for we are underlings.” TFiOS has nothing to do with that. It has to do with John Green’s 2012 young adult novel that’s probably one of the best pieces of literature that I’ve ever read in my entire life. It’s about a young girl name Hazel who meets a boy named Augustus in a cancer survivor group. (Oh. She has cancer. Was that important? That’s probably important.) They grow closer, eventually traveling to Amsterdam to meet Peter Van Houten, the writer of An Imperial Affliction, the reclusive writer of a book that Hazel is obsessed with. (The reasons are pretty clear in the book.) Not going to go much further, because you should go in knowing just about that before you read the whole book, which again, it one of my favorite books.

Here’s the part where I’m going to get on my soapbox for second: people want this book banned because of the adult themes and a few scattered profanities that teenagers will never hear except for books and movies. I’d take these concerns more seriously if not for the other casting scoop that the members of Augustus and Hazel’s cancer group is being played by real teenage cancer survivors. I’m dropping the mic on this one, finishing the post, and telling everyone they should read this book.

A bit with my history of TFiOS... I was taking a class from an extremely excellent professor who is now my academic advisor so I’m going to keep putting “extremely excellent” in front of references to him for a bit. (Also: He was extremely excellent.) It was a class in how to teach young adult literature, and we were asked to pick our own books for a project, so I picked this one based on the fact that it was the first review that I’d just read on the A.V. Club website that was for a young adult novel that they actually seemed to like (they don’t like a lot of stuff) and that it was new and readily available for me to get. Then I sat down to read it at my school’s library. Somehow, three hours passed by, I was finishing the book and sobbing like Leonardo Dicaprio on Oscar Night. (The ending is sad. I’m not spoiling anything by saying this once you read the words “teenagers” and “cancer.”)

Now, ever since I took a graduate level Shakespeare class, I read slow, because I was taught close reading and making connections that I didn’t make before. Yet when I read this one, I had to... devour it. I had to get the information in my brain as quickly as possible for fear that I’d lose something in the process. So I sat down and read the entire thing in one, glorious three our sitting. I loved it. I’d do it again in a heartbeat.

The big question that we are going to use to wrap up Casting Call Week here at Bad Shakespeare is the question of whether or not a TFiOS should be made, and what it means to see our art moved to the big screen.

I’ve talked already about how I went to see the wonderfully wonderful Mortal Instruments: City of Bones (twice) this past summer and while it was 3 a.m. I did quite enjoy my first taste of the Life of Pi.  I also saw Beautiful Creatures (which was a little less wonderfully wonderful), and I’m quite looking forward to Ender’s Game, the Book Thief, and Romeo and Juliet. (Which is based on a play.. but meh, this is my blog I get to make the rules. I can even make up my own words. Smooglybard. What are you going to do about it?)

I’m not sure how I feel about a TFiOS movie, because selfishly... it’s my book. Yes, John Green wrote it, and he didn’t write it for me, and the fact it spent so much time on best sellers list meant that other people read it. But I had just a strong emotional connection to the book. I connected to it on so many different levels it’s hard to explain. I grew to really care about those characters during my three hours with them the first time. I’m afraid that seeing a movie, seeing someone else’s interpretation of the material is going to affect me in some way. It’s a strange fear to have, really, but that’s what happens when you fall so perfectly in love with a book. And that’s what I did there.

Something similar, of course happened with one of my first loves, Empire Falls. I remember they made a movie out of it, cast pretty much people I didn’t think would be good for the part (and for the most part they worked out) but it didn’t capture the “gee wilikers” or smooglybardness that caused me to fall in love with the book to begin with. It didn’t affect my feeling for the book, but it made me a little saddened about the movie. Plus, now I can’t read the book without seeing Helen Hunt’s face. (Although they got one piece of casting so brilliantly perfect with Philip Seymour Hoffman.)

Even with Mortal Instruments, (the movie was better than people are saying. You need to see it so we can get part two made) I didn’t have as much invested with the characters. Oh, I cared (and still do, since I’m not done with the series yet) about the Jace, his (spoiler: not sister) Clary, whiny Vampire Simon, and hot Isabelle... but I wasn’t as invested in the characters as I was with Augustus and Hazel. Mortal Instruments practically screams, “movie time!” which isn’t bad, that’s an asset. It’s a supernatural action movie: Let’s see the action. Let’s see the demons. TFiOS doesn’t have as much of that.

In any event, that’s just a thought of one fan. I’ll go see the movie (tissues in hand, and without my usual movie buddy, as we learned we can’t see sad movies together after the Toy Story 3 Incident) and I’ll probably read the book again before the movie. And hopefully, Willem Dafoe will leave the Green Goblin mask at home. You know, unless he wants to add a little levity to the proceedings.

PS - I found out this movie was being made via the casting of Willem Dafoe, so I centered most of my post around that. I should point out that Divergent diverger and ex-Mary Jane Watson Shailene Woodley is Hazel and some guy I've never heard of is Augustus. I think she'll do well, see my previous note about not knowing who that one guy is.
Posted by Bad Shakespeare at 4:00 AM

Email ThisBlogThis!Share to TwitterShare to FacebookShare to Pinterest
Labels: Book vs. Film, Mortal Instruments, The Fault In Our Stars