An Evening with George Takei 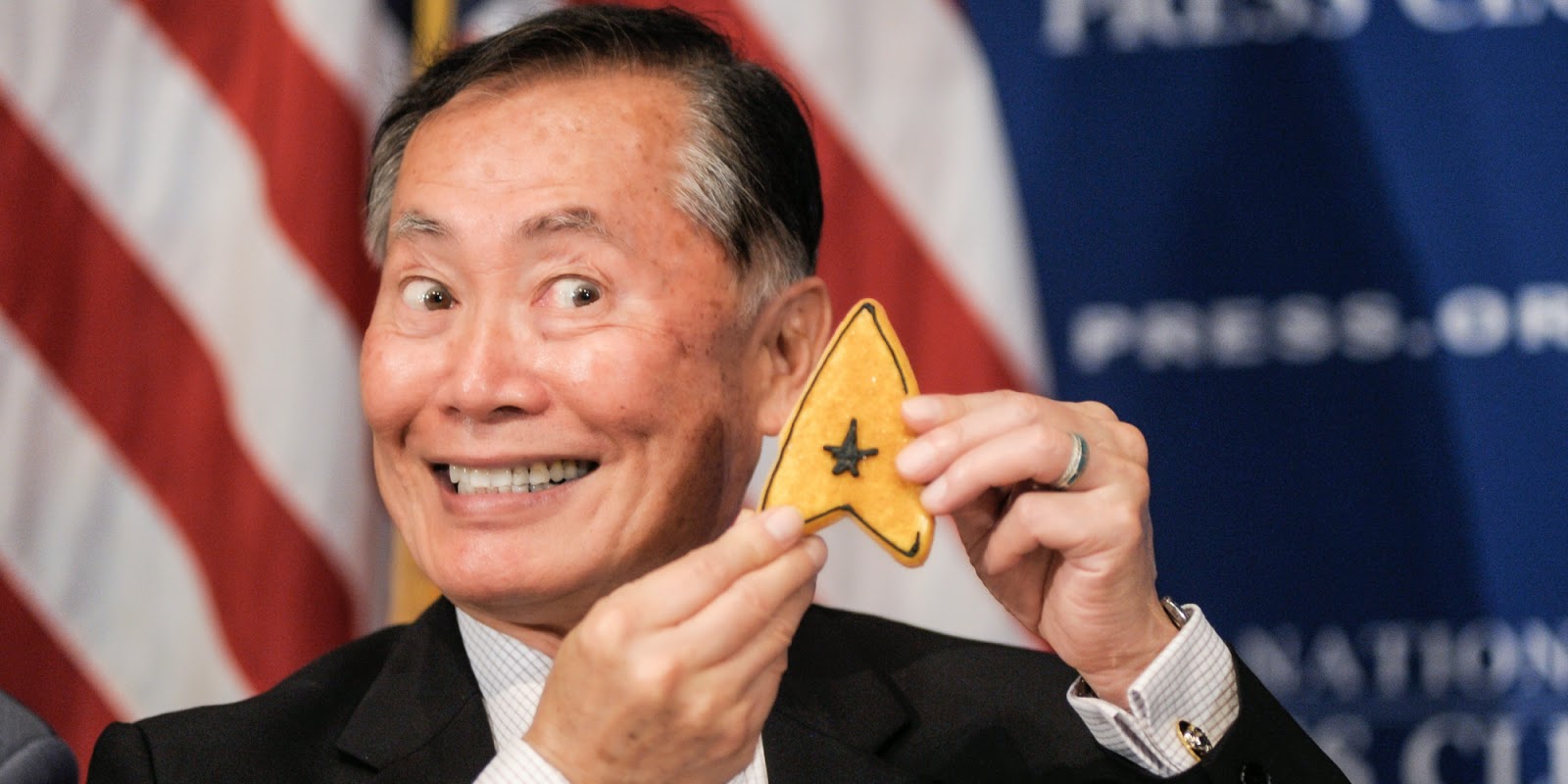 On the stage was a lone stool and a bottle. I’ve never been in an auditorium, especially one filling up as fast as the one i was in, that only contained a stool and a bottle. Even when I saw Neil Gaiman, the impressively haired writer, speak, he at least had a podium. And a little table to keep the index cards we wrote questions down on. But nope. The Center for the Arts at George Mason University had only a bottle of water and a stool.

So, I didn’t know what to expect when George Takei took the stage.

I, like anyone else who donned a yellow or blue shirt with a gold insignia on it (who wears red? Game of Thrones extras, that’s who) knew Mr. Takei from his work on the original Star Trek, six of the Star Trek movies, and that episode of Voyager that reminded us that Star Trek: Voyager was very far removed from the original Star Trek. More people know him now as a gay rights activist and all around funny guy on Twitter and Facebook. Fewer people know him from the TV Show Heroes, because by the time he was on the show it was really a narrative mess. But he was on it, and I guess I should mention it because I’ve been watching a lot of old Gilmore Girls episodes and I really want Milo Ventimiglia to announce that he’s coming back for some kind of Gilmore Girls Reunion episode.

The Office of Student Affairs hosted an evening with George Takei at George Mason University, and it was really just that. And evening where he talked about his past, as an actor, as a child in a Japanese Internment Camp, as a gay man in Hollywood (and realizing he was gay back when people were less accepting of it), his work with charity, and just what it was like to be George Takei.

The first thing you notice as George Takei takes the stage is that he’s a very short man. I’m not talking Lollipop Guild Short, but if you’ve seen him, you probably don’t realize he’s that short. And that’s not a dig against short people or George Takei. It’s just a fact. The second thing you notice is that he commands the stage like someone who belongs there. It was like a second home to him. And the third thing you notice, is that he really, really, really loves this. The first thing he did was throw up the “Live Long and Prosper”  hands while saying “Oh, My” his signature catchphrase that isn’t really from anywhere, but just sort of materialized out of the ether. Or he said it once on Star Trek.

After the audience cold down from it’s reception that seemed more like we were welcoming a rock star instead of a single actor to speak on stage for an hour - and for that hour, trust me, George Takei was a rock star - he started talking about why he was there. And he was basically there to talk about his interesting life. He of course, started with Star Trek, and his idea that it was a metaphor for Earth, and basically everyone should get along.

It was when he started talking about his experiences in the Japanese Internment Camps that really struck me. For those of you unfamiliar with history, back during World War 2 after Pearl Harbor was bombed, many Americans of Japanese descent were rounded up and put into internment camps because when something happens from one group, human reaction seems to be to blame everyone that looks like that group. But, George Takei’s reaction was an interesting one. See, here’s a guy that had every right to be bitter or angry about the experience. If anyone did, it was this kid who had a large section of his boyhood stolen from him by being put into, first a horse stall with four other members of his family, and then again put into this camp, and later given 20 whole dollars for his trouble. But he doesn’t speak of it as all bad. He speaks of the brave Japanese Americans who still volunteered to serve their country - some even going to prison if they didn’t serve it “correctly.”

The best line of the night, for me, was when he talked about being followed by a spotlight when getting up at night to use “the latrines.” Obviously it was to keep an eye on anyone getting out of bed. But he, as a boy, saw it differently: they were lighting the way for him.

I think we could all use that optimism sometimes. Yes, it’s not an ideal situation. But you can either be followed by a spotlight, or you can let it light the way for you.

I point out this section of his speech because this is the part of George Takei’s life that I didn’t know much about. He doesn’t complain about it a lot, and even later in life when he was given money by the Government as compensation for being imprisoned, he just donated it to a museum being built. He took the experiences and put them into a musical, and now, at the age of 77, he’s making his Broadway Debut.

Much of his speech followed this pattern. Yeah, things weren’t easy for him. He looked different. He was gay at a time when being gay wasn’t something a lot of people bragged about. But he took each of these things and turned it into a positive, something to propel his life forward in a positive light. George Takei is a symbol for moving through the bad or tough parts of your life, and turning it into a positive as soon as you possibly can.

It’s not really a secret, but George Takei didn’t get along with William Shatner, on the set of Star Trek. But, when prompted by an audience question, he did everything he could to turn the question into a positive, pointing out that not everyone gets along, that they were just different personalities, and turning the question into a positive story about Leonard Nimoy. Apparently when they did an animated Star Trek Series, they wanted to cut him out of it, but Leonard said, “if he’s out, then I’m afraid I’m going to be too busy to do it” and suddenly there was room in the budget to include George Takei. Imagine that.

George Takei does not consider himself an old man. At one point someone asked him about life advice, and he didn’t consider himself old enough to give it… which makes sense. There’s something in the man’s smile that reminds you more of a mischievous 4 year old rather than the 77 year old man in front of you.

The evening ended, however, with someone interrupting a question to get George Takei to sing a round of Happy Birthday to her friend, in the audience. It was a nice gesture, but I kind of wish she had waited her turn rather than interrupting a good conversation that was going. I guess it’s a reminder that if you’re going to celebrate your birthday by watching a speech from a world famous actor, maybe you don’t have a little to drink before walking in.

But again, none of this is a complaint. It was a good night. It was an inspirational night. It was a lot more than I expected walking in. In the end that’s what you find: that the best nights are more than you expect walking in. I’d encourage anyone that gets the chance to go listen to him speak. He’s a great man, a great speaker, and someone with something to say. And, when you go, let his positivity just wash over you. Try to adopt that.
Posted by Bad Shakespeare at 5:00 AM