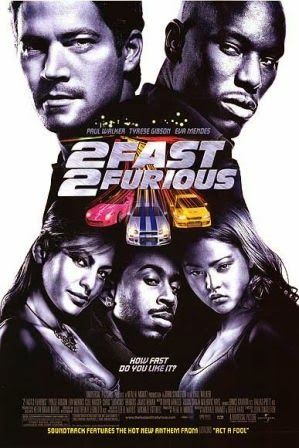 Sequels are hard. I mean, you have to capture the spirit of the original while at the same time moving on to new and exciting chapters in the lives of the characters. And in a movie like the Fast and The Furious, how do you do a sequel to this movie, now that the heisters have al been heisted out and our hero, Brian O’Connor has let the bad guy go? (But didn’t fire angrily in the sky while on his back. You don’t go full Point Break.)

It’s actually pretty easy, you bring back Dominic, played by the now household name Vin Diesel, for one last heist as he repays the debt to the police officer who let him go.

Or, if Vin Diesel has decided he isn’t doing sequels and wants to hang out with Dame Judi Dench, you write out every other character and give Brian another convict to hang out with and race fancy cars.

In the time since we last left our hero, he’s been fired from the force (duh…) and now makes a living in the underground racing circuit. However, when another bad guy is using cars to run drugs, Carter Verone (Cole Hauser doing his best James Bond Villain impression), the police and the FBI once again turn to Brian O’Conner, the only man in the world who can drive a car, to take him down. Presumably because it worked so well in the first movie. Realizing that he needs backup, he turns to an old friend Rome (Tyreese Gibson) who he abandoned when it was his turn to go to jail, so they can team up and take down the evil drug lord. Oh, and Eva Mendes is in it as another undercover cop who’s there to… wear tight dresses? I never really got why she was in this movie, to be honest with you. She was really close to the bad guy, so how much more evidence did they need? Did they need him to threaten more cops with rats and hot buckets?

I’m going to start this with pointing out that this is the weakest part of the Fast and the Furious Franchise. (Yes, I know we have Tokyo Drift coming up… more on that tomorrow.) But this is a sad attempt to recapture the magic from the first movie without really talking too much about the first movie. Instead of heists there are drugs. Instead of Vin Diesel, we get Tyreese Gibson, who is a great actor in his own right, but lacks the complexity of Vin Diesel’s Dominic. Basically it boils down to: Why didn’t you help me out? when dealing with Paul Walker.

Then there’s the fact that the police are essentially incompetent murders in this, basically willing to sell out Brian and Rome so they can make the quick bust on this guy that they have more than enough evidence to bring down. Eva Mendes is running with them, but spends most of her time off screen, popping up to complicate the plot and maybe ask where her loyalties lie. (Of course, she’s an honest cop, as she isn’t down with the whole “shooting the guy in the head” plan.)

No, where this movie fails is with the Brian/Rome relationship. Don’t get me wrong, the two actors have an incredible chemistry, and I could watch them play off each other all day. Honestly, their friendship was the most realistic thing, with hidden in-jokes, light ribbing, and even a drag down fight after seeing each other after a while. (It’s a guy thing.) The problem is that Rome is essentially a “hey we couldn’t get Vin Diesel back so here’s the next best thing” type character. I wanted to see them take it in a different direction.

Of course there are still fast cars and the whole thing ends by showing as many souped up cars as possible. and that’s the real reason we tune into the movies, anyway, because of zoom zoom.

Essentially, this is the most sequel-like movie in the entire franchise, which is why this one doesn’t fascinate me as much. But it’s essential as we take on our next five movies.

Coming up tomorrow: the Fast and the Furious Franchise fast forwards into the future.
Posted by Bad Shakespeare at 10:42 AM

Email ThisBlogThis!Share to TwitterShare to FacebookShare to Pinterest
Labels: Paul Walker, The Fast and the Furious