Limited Release Much Ado About Nothing?? 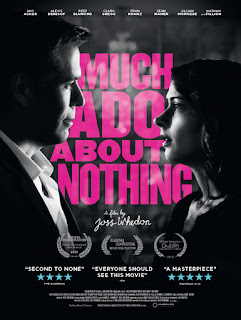 Whelp, today is June 7th. Which means today is the day that our High Commander, our Leader, High Lord Joss Whedon told us to go expand our literary palate by going to see his adaption of William Shakespeare’s Much Ado About Nothing. It’s just a little film he threw together starring some of his buddies after his last little art flick, The Avengers. (You may not have seen it, it was a movie about a group of outcasts who learn to overcome their differences to strive towards a common good. Also, Hulk smashed.)

And I was looking forward to watching it, and then reviewing it. I really couldn’t wait. Of course, then I was sucker punched in the throat with those magic words, “limited release.” The nearest place this movie that I’ve been looking forward to for over a year is playing is in New York City, over 200 miles away from me. It make seeing a midnight version of this very difficult.

But I’m not going to let a little thing like “not seeing the movie” really stop me from writing this post.

The first paragraph, of course, would be the one you just read that would talk about the epic story behind this black and white, modern day set version of Much Ado About Nothing, filmed by the High Master Whedon. He did so with some of his regulars... Amy Acker, Alexis Denisof, Nathan “Captain Mal” Fillion... and added that guy who played Agent Coulson in The Avengers and a few other movies. But, of course, it’s limited release, so I can’t really talk too much about that.

Then I’d talk about how much I’ve always liked Much Ado About Nothing. It’s one of my favorite plays. Even though it was written centuries ago, it’s still laugh out loud funny today, and still has a lot to say about the interaction between men and women. (Particularly with the idea of not listening to your heart, despite the fact that you really, really should.) Of course, being on limited release...

I’m sure at some point I’d want to write something about the fact that it was done in black and white, and it would add to the fact that it’s modern, but it’s also got that timeless quality. I’m sure the black and white will look fantastic when I finally get to see it in two weeks, when it’s no longer on a limited release.

Let’s not forget the acting. I can only imagine how this wonderful stable of Whedon regulars and a few new faces bring to life some of the more known Shakespearean characters. I’m certain that a standout will including Fillion, Captain Hammering it up as Dogberry, the inept lawman who manages to crack the case wide open and save the day. (Although with no idea that he’s done it.) I’m sure Amy Acker would knock it out of the park as Beatrice, while Agent Coulson would fit right in as Leonato in joining this group.

Yes, I am quite looking forward to talking about how much I may enjoy this movie when it’s finally released to everyone, not just a few select cities tomorrow.  This blog is called Bad Shakespeare, and nerd talk is our life. It’s not like I’m going to miss watching one of the funniest Shakespearean movies directed by the Nerd-King that is Joss Whedon. Sadly, I have to wait two weeks, until June 21st, for this to finally happen.

Or maybe I’ll take a trip up to New York City.
Posted by Bad Shakespeare at 4:00 AM

Email ThisBlogThis!Share to TwitterShare to FacebookShare to Pinterest
Labels: Joss Whedon, Much Ado About Nothing, Summer movie season