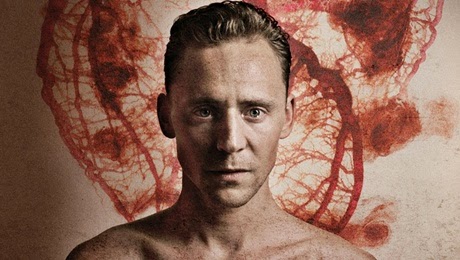 Recently, I went to go see Coriolanus at the Shakespeare Theatre, specifically in the Sydney Harman Hall, where I once made it through an entire tribute to Michael Kahn, including meeting the man, without once dropping to my knees and yelling, “KAAAAAHHHHNNNNN!!” at the top of my lungs. I’m pretty proud of myself for that.

This particular production was part of National Theatre Live, where it broadcast a recent production of the play from the Donmar Warehouse Theatre in London’s West End, and starred Tom Hiddleston, probably best known for managing to out-handsome the main character in Thor, and Mark Gatiss of Sherlock’s Brother fame. It was a pretty cool production.

For those of you who don’t know Coriolanus is one of Shakespeare’s later plays, and the last one set in Rome. It’s about a general named Caius Marcius, who’s this really cool general, but the common folk hate him. Which is ok, because he hates the common folk, so it’s mutual. He gets word that there’s a Volscian Army about to go fight Rome, so he goes and fights, personally taking down (but not killing) the leader of the Volscian Army. Later, he’s told by his mother (and man... does this guy have some mommy issues) that he should show off his scars, then run for what amounts to a pretty high political office. Fresh off his victory he easily wins the support of politicians who wish to glom on to a war hero (my, how times have changed) and then eventually starts to win over the people, but naturally two other politicians who hate him get in the way. Caius speaks loudly against popular rule, he’s condemned as a traitor, then he goes and finds the General of the Volscian Army that he recently defeated and joins up with them. Because he wants to fight. Rome, realizing there’s a problem with this great general joining their enemies, tries to persuade Caius to come back, eventually settling on sending his mother to go find him and tell him to come home. Eventually, Caius decides to make peace, and in true Shakespeare fashion, once he learns his lesson he’s brutally murdered by the Volscian General he spared earlier.

As I mentioned earlier, this isn’t one of Shakespeare’s more well-known plays. The main character Caius who later gets the nickname “Coriolanus” doesn’t spend a whole lot of time giving reasons for what he does to the audience, he spends a lot of his time “doing” which I find interesting. However, after discovering it, Coriolanus has become one of my very favorite Shakespearean plays, and it’s lead one of my very favorite characters, in probably just about anything.

I mentioned in my very brief review that doesn’t do the play any justice, that Coriolanus is a general, and has a complicated relationship with is mother. One that would probably make Norman Bates take a step back and say, “whoa. Let’s calm down a little bit...” She spends most of his life convincing him to be a great fighter, general, and overall hero, and he does it. He almost becomes a robot, unwilling or unable to think of anything else. Indeed, his tragic flaw is that he’s so focused on this one thing that once he gets it, he can’t move on. When asked to be a spokesman for the people, he can’t fathom speaking for people so below him. Rather, he wants to fight so badly he goes an joins his enemies because that’s what he’s been trained to do.

No. Not the mother issues. She reads this blog regularly. Hi, Mom! And I don’t want anyone to mistake what I’m saying.

Coriolanus is a man who’s pushed his whole life to be one thing. He gets pushed to the point, and expectations get piled on him so high that when he’s asked to go in another direction, it’s really easy for him to be tricked into throwing it all away, and then running back to what he was good at... because he’s constantly told that’s all he was good at. I think too often we all fall into this Coriolanus trap. We all decide at one point or another that we’re “good at something” or “not good at something” and fall into familiar roles. In Coriolanus’ case, it was so extreme that he just wanted to be a general, it didn’t matter that he was now going to be a general for the army he just defeated, and he was going to go off and fight his friends. Essentially, Coriolanus was a monster, created by his situation, and then everyone was baffled when the monster turned on them.

But for how many of us, how many times to we get stuck in positions where we are told we need to be a certain way, then do it, and are unwilling to take a risk that we just might suck at something? We’re all told: “You’d be great at this” or “you’re such a great XXXX” and then we don’t leave, because we’re being told by people that we need to stick out what’s familiar instead of trying to pull together what’s unfamiliar and uncomfortable? I know I feel like that. It’s one of the reasons I went so far into my teacher training: because I believed I wouldn’t be any good at the thing I really wanted to do. And I suffered for it. Big time.

Coriolanus is a complex character, but one that flies under the radar. He doesn’t have the fame of Hamlet, nor the flashy race-based issues that can be applied today that Othello does. He’s not really manipulated by his wife like Macbeth, nor does he have the sheer foolishness of Lear. No, most of his story is told off the page, and we get a quick glimpse into what happens when an entire life leads up to a moment, then he’s told to change. He believes he’s superior to everyone. And that deeply affects him, because when he’s told to humble himself, he just can’t do it. Oh, there are conspirators... Rome always seems to have them. But that’s what I like about him. He’s a man who’s trapped by his own self. And I don’t think we realize just how often we all get trapped by own our selves, we get in our own way. Coriolanus wanted to be a great man, and returned from war a great man.

It’s easy to point to a tragic flaw in Shakespeare’s Tragic Heroes. And we will often do that, and then it’s easy to judge. The thing about Coriolanus is that he was failed. He was failed by people around him who were supposed to help.

What I relate to about this character is the fact that he was trapped. He was trapped by his sense of self, and who he was. He walks into the play knowing who he is. He spends half the play knowing who he is. The problem comes when he stops being who he is, and then tries to be something else for everyone else, because they all say “that’s what you should do.” I think its important that we all go back to that one idea that we are true to ourselves.

Whew. Got a little preachy at the end. I promise they won’t all be like this!
Posted by Bad Shakespeare at 4:00 AM