My Brief Experience as Aquaman 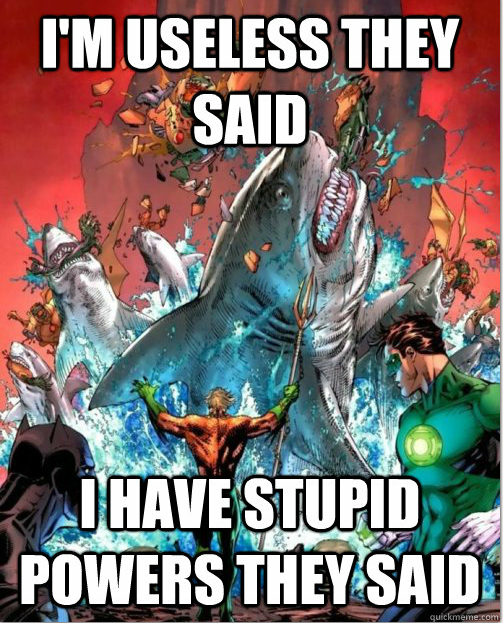 Aquaman was always had one of the sillier superpowers. you know, back before they decided to reboot him. He became king of the Ocean. Then he was able to do more than just talk to fish. Then they decided to cut off his hand and replaced it with a hook, which made sense on his character more than any other. I mean, can you imagine Superman with a hook? He had a mullet for a while, and some blue electric powers, but hook? Or Batman with a hook? He’d make it all bat shaped, and I’m not sure that it would really make a lot of sense.

I’m getting off topic here. This is about Aquaman. Or, about how I briefly tried to recapture some of my youth, and managed to show that I’m getting old.

As I’ve mentioned on this blog, I’ve undergone a bit of a year of epiphanies. Firstly, I realized what a lot of people had been telling me since day one of my experience in learning to be a teacher, which was “Hey… you probably shouldn’t be a teacher.” I wish I could have deciphered what they were saying.

Then, I suddenly realized after not holding down an office job for a year (as of this Saturday, actually) that I’m not really built for working in an office. It works for some people, and if it’s something you enjoy, then more power to you. I was never really able to translate my love of data entry into a viable career. I may one day.

So I’ve been getting by with the occasional odd job. Sadly, not of the hat throwing, kill James Bond variety (kids, ask your parents) but a little something there, and a little something there. Then I realized that I was a lifeguard for 6 years through most of High School and College, so why not try that again? It was an indoor pool, so it provides year round employment. What could possibly go wrong?

Spoiler: I’m currently writing this with a severe knee injury, waiting to talk to an orthopedic surgeon.

Of course, with this great idea I didn’t really think about the logistics of it all. I mean, for starters, I’m a little bit older than I once was. Lifeguarding is a great job, and it’s one that can help work off the years of sitting at a desk, typing into a little glowing box while donuts and candy were readily available for my consumption.

I didn’t really think at the time that the job is held by teenagers, and when I got the job, I’d have to be in a class with teenagers, and keep up with them physically.

Here’s where the appreciation for the powers of Aquaman. He does everything regular superheroes do, but underwater. (And occasionally one handed. But his hand got better.Don’t ask. Comic books.)

The first day of class was interesting. It’s amazing just how much I managed to retain from my days of being a Lifeguard the first time. I guess memorizing things for six years is going to stick with you a little bit. And things haven’t changed that much. Lifeguarding is pretty much that… guarding lives. And watching the water. And yelling at kids for not running. That’s a big one. Don’t run. We’ll come to get you.

I even managed to survive the dreaded water portion. Not that I thought I wouldn’t, but there’s a point when the class instructors did plan on everyone getting by on the fact that they were all teenagers, and able to swim for long periods of time without needing much of a break. It was around then that I started to feel my age. Not really old, just that a life of data entry hadn’t really moved me forward in my athletic endeavors so much as moved me backwards. A lot.

It was the second day that gravity struck. I was helping to bring someone out of the pool using a backboard. For those of you who don’t know, a backboard is a fancy piece of equipment that hasn’t really been updated since the 1980’s because it has the advantage of being a large piece of wood with velcro on it. It’s also rather heavy because it needs to sink in the water to get under people so they can be strapped to it, or in a pinch, lifted from the water.

It was those drills that we were practicing at the time. We were lifting people out of the pool using the backboard, two at a time.

Now, I’ve thrown in here a few times that I’m fully aware that I’m older and out of shape. But i’m fairly strong. I’m just lazy, and I need to harness that power. So I can lift a majority of these kids out of the pool myself, and I can find things like a backboard to get in the way of this. The fact that a real person was on the backboard also means tat I have to temper that strength, and say, rather than lifting them as high as I can, I have to ensure that I was lifting them at a level that if, say, the two inexperienced people holding the backboard should happen to drop them, it wouldn’t hurt.

It was during this that I attempted to lift the backboard. Now, if you remember, I pointed out earlier not to run on the pool deck. You see, the pool deck, while nice, hard, concrete, can get slippery when wet. So, if you’re crouching on the deck, trying to hold up someone on a backboard while simultaneously ensuring you don’t lift them too far while someone else is pushing that backboard from the other end, and that deck is slippery…

…sometimes you slip, cracking your knee as hard as possible, with not just your weight on it, but a backboard and a 16 year old human at the same time.

I don’t remember this, but the pop was so loud they stopped the class right then and there.

To make things even more fascinating for me, the training was being conducted at the facility in which I had been hired. Which mean that lifeguard, now putting on gloves and filling out an incident report, was going to be my new co-worker.

So what does my future hold as Aquaman, defender of the seas? I’m not sure just yet. I have another appointment for people to take a look at my knee. The swelling is down, but sadly, I still can’t put too much weight on it… thankfully just my own and not anything extra… without feeling pain. Which has been great for me trying to catch up on the newest seasons of House they just put on on Netflix, but doesn’t do much for my future as an Aquaman.

I’ll have to keep you posted.
Posted by Bad Shakespeare at 12:23 PM

Email ThisBlogThis!Share to TwitterShare to FacebookShare to Pinterest
Labels: Aquaman, My life