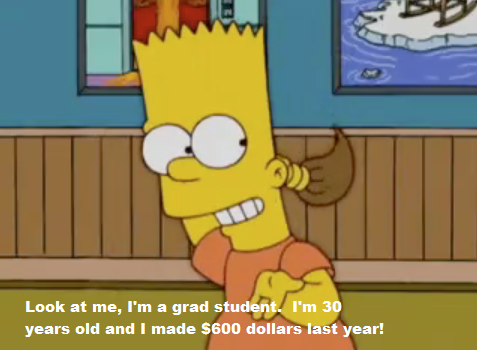 I use this space for a lot of things. Sometimes it’s my silly thoughts on movies. Sometimes I just feel like writing something funky about James Franco and Nicolas Cage fighting over the soul of the world. And sometimes, I look back and try to figure out just how I got to this point in my life.

Today marks my first day as an English Graduate Student. It’s not my first day as a graduate student. No, I did that for a while for Education, as I’ve mentioned many times before. In fact, this blog was supposed to chronicle my adventures in becoming an English Teacher, back before I realized I could get some laughs writing about movies and James Franco and Nicolas Cage fighting over the soul of he world.

I guess this post is going to be a little more reflective than what I normally do. That being said, if you’re more into James Franco and Nicolas Cage fighting over the soul of the world type posts, I promise they won’t ALL be this reflective from here on out. But it’s what I need today. And I am the writer of Bad Shakespeare, the Blog.

Last Saturday was an anniversary for me. It’s the anniversary of when things really started to change. Saturday marked one year since my contract was up with my previous office… which meant it’s now been one year since I put on a tie every day and went into an office and did office worker things: sitting at a computer, answering phones, and finding new and creative ways to pass the time by hiding pictures of Paula Deen in one person’s desk, or suran wrapping another person’s desk and putting up a biohazard sign over it. Good times. I’ll also have to tell you about the hand sanitizer at one point. That was one of my prouder moments.

Everything has changed so much since then. I had quit that job previously, then re-taken a position to hold me over up until I started my internship. Because of the pesky Praxis 2, which I also railed against during this time, I didn’t start it until January, but my contract was up in August, so there wasn’t much they could do. The people i worked for were already nice enough to not only hire me back, but extend my work an extra few months because they were that awesome.

So yeah, no typical office job… I actually found another job that doing something I absolutely love part time. Also, I moved from a big house to a smaller apartment in a location I like. I decided I didn’t want to teach high school and moved on to English abruptly. Oh, and I found a pretty cool set of Supernatural Action figures, so I got that going for me too. Lil’ Cas is pretty awesome.

It’s just odd to think how much has changed. By this point I thought I’d be readying my own classroom, making lesson plans, getting tests ready, and welcoming a new crop of students. Instead, I’m putting on a swimsuit almost daily. I’m not worrying about the lawn. My ties have been sitting in a garbage bag on the bottom of my closet for the past few months because i haven’t needed them, except rare occasions where I have interviewed for the random job that looked interesting, but I apparently didn’t wow them. I’m also sitting waiting to take more Graduate Level classes, still unsure what to expect.

I’ve mentioned before that Secondary Education is more guided. Some of it is State Mandated, some of it is school mandated because it was for a Masters Degree. And with English, I can take a wide variety of classes as long as i take the two main classes. But sometimes I wonder if I’m smart enough, you know? Like maybe they made some kind of cosmic mistake letting me in. Maybe somewhere there’s a guy with a similar name to mine that got a rejection letter meant for me. It’s jut that little bit of fear that always creeps into your head once you get the reading list and you wonder if you’re going to understand all of it.

Of course, Doc Sparky Sweets covered one of the books over at Thug Notes, so I’ll rely heavily on that for a little bit.

I’ll get over it. It’s called an irrational fear, that being that it’s not a rational and can’t be wished away by saying “I’m smart and my name is unique enough that they couldn’t have messed it up completely.”It’s just tough for those first few days.

Some of it is all of the change in general hitting me in the face like so many fish at a Seattle Market. It’s just been a lot to process.

Again, this is all reflection. I’m not trying to make any sense of it, just trying to process it. I’m not even sure where I’m going with all of this right now. I’m interested to see how the semester goes from this point on. Of course, I’ll keep you updated in between movie reviews and stories about James Franco and Nicolas Cage fighting for the soul of the world.