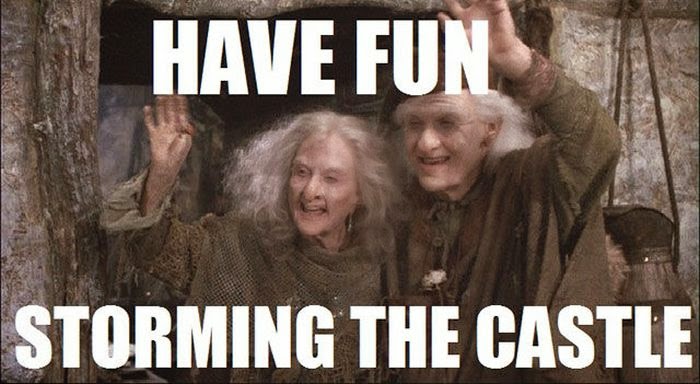 Batten down the hatches, ladies and gentlemen… it’s Black Friday.
That’s right, Black Friday, that time of year that comes earlier and earlier each year to the point that it’s started cutting into Thanksgiving Day. By 2050, scientists fear that the next year’s Black Friday’s Deals will actually start on the preceding year until eventually, it causes a time vortex that destroys us all.

For those of you who don’t know (and I know that just about everyone who is reading this knows what Black Friday is, but I have a joke, damnit, and I’m going to make it) Black Friday is the day that used to fall the day After Thanksgiving where everyone who hasn’t heard of the internet runs to overcrowded malls to trample people for half priced televisions under the guise of giving gifts, but instead thinks it looks really nice in front of their couch so they’re just going to go ahead and keep it right there.
I can’t think of a better way to kick off the time of year when we celebrate the birth of the world’s most famous pacifist who preached a lifestyle of poverty than to physically threaten our fellow man over the last half priced Playstation, can you?

Quick history lesson: Black Friday got its name not because Thogor the Black Knight, famed destroyer of worlds began his shopping on this day, and murdered seven people to get the last Tickle Me Elmo, (Kids, ask your parents) but rather it’s because it’s the time of year that it’s believed many retailers go into the “black” in some ways assuming that the rest of the year they’re in the red, which is a horrible, horrible way to run a business. My explanation for the name is better.

I actually participated in a Black Friday Event, once. this was back in the good old days, when the stores opened at Midnight on Black Friday, thus technically getting around the whole “it’s open on Thanksgiving” and appeasing the crowd that routinely complains about forcing people to work on Thanksgiving and I guess magically believe that all the trash following the Macy’s Thanksgiving Day Parade and the concessions sold at the Football Games are done by magical fairies that do not celebrate Thanksgiving, but rather another, more magical holiday that we all give them the day off.

Yes, simply for the experience, I “lined” up outside a local Target to buy… well, nothing, really. I had the next day off and I just felt like going out. And I use the word “line” in quotes” because to be honest with you at that point it was less a line so much as a mass gathering of people that threatened to erupt into mild shopping at any moment. And by the time they let us in, it was really just chaos as pretty much any person could just walk up. I think someone did. I don’t remember.

I was woefully unprepared. The person in front of me had a Target catalogue with all the sale items circled and post-it notes on most items color coded to whom they would be purchased for. I don’t think I organize my notebooks that well. In fact, I’ll just say it, I don’t organize my notebooks that well. I still keep bookmarks with loose receipts I get, probably from a movie somewhere.

Now, I should point out that I did have some experience with Black Friday. I used to work right above a Target. This Target was unique in that it probably did more business on weekdays, when people were at work and bored (or dodging out on a fire drill like some people who will remain nameless, Sharon) than it did on weekends when it was largely inaccessible in that it was in a place in Northern Virginia, and just about everything is inaccessible in Northern Virginia on the weekends. I think our motto is “come because we’re really close to Washington, DC, stay because you can’t leave.”

This particular Target was pretty cool, because after the throngs of people would raid it and get the deals, my co-workers and I, that were totally working on the day after Thanksgiving instead of coming to the office and just goofing off, would head down at an approved break time (totally, I swear) and pick over what was left. I actually got some good deals, and I didn’t have to beat an old lady as I grabbed that cool pair of Superman Socks that I would never wear.

Back to this midnight Target event, I don’t think I’ve ever seen anything like this. I’ve been in crowds. I’ve stood in line to get Billie Piper’s Autograph, and that involved talking to a guy dressed as the Joker for 2 hours. I’ve been shoved up against a door as a roof collapsed from ice. (I should have probably led with the last one. I made my notes, I’m sticking too it.) but I don’t think I’ve ever seen this many people running for, let’s be honest, stupid stuff, before in my life.

Hey, I love my gadgets. I’m not returning my PS4 or my big TV anytime soon. But I’m also not going to run, Mad Max style, towards it, leaving as much carnage as possible in my wake.

For the most part, it was calm, just with a lot of people. I know there are stories about people who hurt other shoppers because that’s totally what Jesus would want this time of year. I realize that it could be worse, and my experience was kind of lame. I mean, I did find some cool games on like, mega sale, so I did pick those up (the lines weren’t bad, either. People got us in and out.)

I don’t know that I really had a point when I started writing this. Part of it is, well, the fact that you should probably just order whatever online. That way you get to drink hot chocolate in front of a fire and watch some movies instead of fighting with parking spaces and then having to walk all the way to a store. Who needs it. Plus, if you time it right, by the time you’d be crashing carts with someone, Ben-Hurr style, you could be getting your second helping of Turkey without anyone knowing. (That’s the strategy. Get your seconds after everyone is in their food coma.)

Happy Holiday Season, everyone!
Posted by Bad Shakespeare at 5:00 AM