So, I finally watched Snowpiercer...

This past summer, I watched 42 movies. I even ranked them, sorta, talking about which ones I loved, like Let’s Be Cops or 22 Jump Street, or which ones should be burned, ashes buried, and all memory deleted lest aliens one day see them and judge us on them. Tammy. Transformers 4, because I refuse to call it Trans4mers. Heh. I guess that is kind of clever.

Throughout this movie odyssey in the summer, one movie kept coming up. “Hey, I’m glad you enjoyed Fault in Our Stars… have you seen Snowpiercer?” “OMG SNOWPIERCER FTW!” “Hey…. hey…. hey… Snowpiercer…” Even critics were like “Here we go, the BEST movie crafted is now Snowpiercer! Why aren’t you watching it?” Everywhere I turned recommended this movie to me, and told me I should be watching it. I was kind of excited.

I didn’t actively avoid the movie. It has a lot of elements I really like. Sci-fi stuff. Post-apocalyptic societies. Trains. Captain America, somehow playing a dude who has been starving for 17 years but is somehow gorgeous. John Hurt doing his best Gandalf/Dumbledor/insert name of wise old character here. It was supposedly this awesome class/environmental/religious allegory with some beautifully shot sequences.

But I didn’t get around to seeing it. To be honest with you, it was only playing at one theater that wasn’t my usual theater, and on in-demand and the whole criteria for me going to see the movie was that it be on the big screen, small screen was cheating just for my purposes. As much as I wanted to see it, I didn’t.

And after finally having had seen it, I’m kind of glad I didn’t, only because my post that had the movies I disliked already had 6 entries, and I would feel bad not being able to include one of those because this was on it. In other words, let Zoidberg tell you how you should feel about this movie. 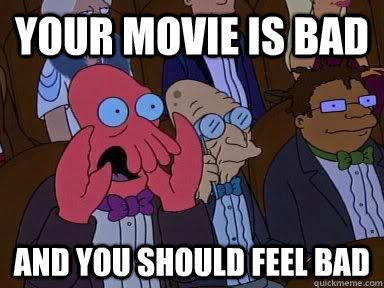 I hated it. I couldn’t hate it any more. It wasn’t a genre-savvy satire of class structure and religion gone wrong. It was a two hour mess that made no sense, beat the viewer over the head for two hours with half-formed metaphors, and made no damn sense.

Unfortunately, this puts me in the minority, one that gleefully points out that I enjoyed Damon Wayans, Jr and that other guy from New Girl (Jake Johnson) pretend to be cops in a series of wacky misadventures as if that matters. let me make it a bit clearer for you: Let’s Be Cops was clearly never going to be the best movie of the year. It wasn’t the funniest movie of the year. I don’t really think it was the funniest movie in the theaters that day. Damon Wayans, Jr, as much as I love him, will never be clutching an Oscar for his role as the lovable sidekick in that movie. But it was pretty well put together, and delivered on every promise that the trailer or reviews made. I had fun, and even if I can point out the many flaws, I still enjoyed the movie.

For those of you who haven’t wasted your two hours, it is about a train called Snowpiercer that travels the globe following a catastrophic weather event to counteract global warming that has frozen the Earth. The train has set up a class system that is supposed to be complex but isn’t really: the poor live crammed in the caboose while the rich live in luxury (?) in the front of the train. The passengers in the tail room have decided to revolt, much like some other people revolt a few years ago, and seize the perpetual motion engine that runs the train.

Spoiler warning: And it turns out that the whole revolt was a plot between John Hurt’s character, Gilliam, (who had some hand in building the train - don’t worry, they won’t explain what) and Ed Harris’ Wilford to thin out the population and thus resources, even though no resources are really being used to keep the tail section alive other than some bugs, and they don’t really provide anything other than kids to keep parts of the train running, although this is a new development. Also they may want Chris Evans’ Curtis character to run the train, but that may have been a ruse or something, and talking to him about it was out of the question for some reason. Did I cover everything? Oh, yes, and there’s a chance that the outside world is livable again. Our only shot about that was a Polar Bear, and there’s a good chance that the new bags of not readily available meat emerging from the broken train at the end were about to become food.

Let’s start with the plot, which is this revolt that runs from the tail engine to “thin the herd.” The front engine people, who emerge as comic characters - thus negating the entire sense of despair and seriousness the first 10 minutes spend setting up - have such control over the characters in the tail end that they are able to burst in and shove a man’s arm out of an open window long enough for it to break off, because they find the wrong pair of shoes in his room. Again, after setting up this terrible environment, this entire moment is played off as a comedic scene. But they have this control… for what? If the plan is to thin out the herd, why go through every death in the movie when they could just slaughter the tail engine and throw them out the nearest window? Oh, wait… they do that, just after they’ve fought and managed to kill a pregnant woman, among hundreds of faceless thugs, in a moment that doesn’t really understand the way claustrophobic scenes are shot. the battle scenes in Braveheart are more claustrophobic than this.

Then there’s the ALLEGORY… THE TAIL END IS THE POOR PEOPLE, and THE RICH PEOPLE ARE UP FRONT and Willford IS GOD. Don’t worry. Not only will they not spend any time with this, but they’ll also not show you too many other rich people, except for a strange rave scene, and the kids of the rich people who are busy learning things. You’ll spend time with some of the officials, but again, they’re all zany, over the top, clowns. I get that some people did this intentionally, but this completely undercuts everything that was said.

But with the poor people vs. the rich… that only works if we spend time with the rich people. But we don’t see any of them. We don’t how they live, except they get eggs on New Years… time isn’t really celebrated, as kids are in school AS THE NEW YEAR HITS. They have sushi once a year, in a scene that describes the concept of the movie for anyone who may have missed it when it gets repeated at the end. And a strange rave scene that’s comes back more as a zombie movie than anything else. But we dont’ see any living quarters, or anything else. There’s a kitchen that implies they have lots of food, but no cattle car or anything like that.

There’s also zero world building in this. Yes, I know, some will argue, but see the point above bout the kids being in school with New Years It’s enough to make everyone stop what they’re doing any pay attention. It’s enough for people to get eggs. People are able to see and recognize their favorite spots, that they see once a year, but this is frustratingly vague. One character comments that he’s seen a spot slowly melting, despite the fact that he was locked in a closet for a good portion of the journey.

This is also a frustrating moment, because in the school we get a harrowing tale about the previous revolt -  the pregnant teacher who treats Wilford like a God points out that seven people tried to leave, and shows us their frozen, visible bodies from the train. Then two minutes later one of the nameless bad guys, having just revealed that all of the guns do in, fact, have bullets (there was a question as to whether all the bullets were used in the last revolt…. don’t worry, they weren’t) Then proceeds to try to shoot the government sanctioned revolt leader (Curtis) through the windows of the train.

The outside is dangerous! Let’s destroy the windows! Especially because we WANT to kill everyone in the revolt already. Never mind that we can just shoot the people we don’t need and dump their bodies out in the cold with no consequence, let’s have cool ninja type fight scenes.

I could go on. The tone shifts wildly. We don’t get enough time with the allegories to get a real clear message. The ending is just so moronic (everyone dies. Except two people. Also, Curtis loses his arm, because it turns out he wanted to eat a baby, but Gilliam cut off HIS arm to feed Curtis. That baby was his best friend, who ended up dying several scenes earlier.) The movie itself almost plays out like a parody of thought-provoking science fiction dramas. Maybe I would have enjoyed it more had I treated it like that, instead of the great movie it was supposed to be.

Again, this puts me in the minority, who will point out (and already have) pointed out that I liked other movies, so I guess it disqualifies (?) me from having an opinion on this movie that runs contrary of the pack. But, and I won’t even do the fake “I’m sorry”… I did not enjoy this movie. It was not a good movie. It wasn’t even a good stupid movie, like about half the movies I spend time rewatching. It was a punishing experience, made worse by the fact that it was supposedly this great movie that I was “supposed” to like.
Posted by Bad Shakespeare at 4:00 AM