Book Report 52 Project: Into the Night by Suzanne Rigdon

Quick Programming Note: I like to read. I haven't been able to read much over the past year because I got lazy, and I like to make excuses as to why I can't read, despite the fact that I love to read. To challenge that, I've given myself an assignment: I'm going to read 52 books in 2015. That's one book a week, outside of Graduate School. And I'm going to hand over Fridays on Bad Shakespeare for my Book Reports. So welcome to the first installment of the Book Report 52 Project on Bad Shakespeare. 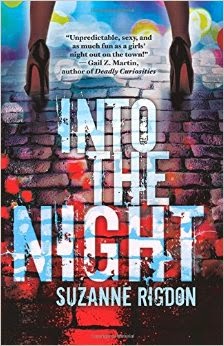 Vampire novels nowadays are hard. They've been examined, re-imagined, pulled apart, put back together, made scary, rebooted, made unscary, rebooted again, slayed by cheerleaders, loved by cheerleaders, turned human again (shang-shu to those who know), battled werewolves and zombies, parodied, defanged, refanged, loved, hated, time travelled, hunted by former presidents, young adulted, fan ficitioned, turned into movie after movie after movie... if you name it, it's probably been done. Except maybe in space. Have vampires been in space yet?

Note to self: check and see if Vampires have been in space yet. If not, write a million dollar book idea. Ka-ching.

It is with this in mind that I went into Into the Night, the debut novel by Suzanne Rigdon. The idea that Vampires were everywhere and new versions were hard. And on paper, it's there's not a lot new introduced into this novel. Girl meets hunky guy? Check. Girl goes on date with hunky guy? Check. Hunky guy turns out to be undead creature of the night? Check. Girl becomes vampire? Check. Girl becomes embroiled in classic underground struggle between the Vampire Queen, jealous lovers, and hunky guy. Well, check, but I guess that's less of a cliche.

Into the Night tells that story... the story of Selina Baker, a coordinator for a Boston-based nonprofit, who goes out one night with her best friend, Jess, then meets James, goes on a date with him, and is attacked while trying to get ice cream. Turns out James is a vampire, and she's soon drawn into a fully realized vampire world, one that feels lived in... which is nice since most vampire stories tend to just say, "VAMPIRE" and then leave it at that. Selina finds herself at odds with the Vampire Queen, and drawn into a dangerous world.

It should be noted at this point that I really enjoyed this novel, despite my initial fears that it was going to be "just another vampire novel." The best thing about this novel is that it doesn't attempt to really re-invent anything, but it expands upon it, and creates a fully realized world.

The novel itself starts out kind of slow. Yes, when you know that there's going to be Vampires and supernatural stuff, there's an element of "When are they going to get to the fireworks factory?" type expectations, but what Ms. Rigdon is playing towards is her strengths, and that's not just dropping random characters into a Vampire story and trying to invent some kind of new Vampire or twist on it. It's a slow build, and allows the reader to really enter the world.

I keep using the phrase, "Enter the world." That's important for me as a reader, and I don't think enough people focus on. There's going to be another novel I'm going to review on here that doesn't allow that entrance into the world, and just sort of expects everyone to think "hey... this is happening" and it works to the detriment of the novel itself. Ms. Rigdon works hard to establish a world that is at the same time realistic, but allows fantastical elements to co-exsist. Most of the main characters are fully fleshed out.

The other standout feature of this novel (and this is standout) is just how creepy the Vampire scenes are. Too often, in other novels, the danger in these scenes is tuned down. I've never been sucked in (get it... sucked in... Vampire novel? Hey, they aren't all winners.) by the sheer creepiness of these scenes, or the danger associated with them. You want some good scenes where the main character actually seems in danger rather than, "oh, it's a novel, she's going to be ok?" Yeah, check this out. It's listed as "urban fantasy" but it's really more of a horror novel. Ms. Rigdon has some serious chops when it comes to writing truly scary scenes.

My only real complaint is a little variation of what I said before, and that's the very start and the very end of the novel itself. The novel starts slow - like I said, Ms. Rigdon's strengths really lie in the horror aspects of the novel - so some of the earlier scenes where Selina spends a few paragraphs picking out an outfit tend to go on a little bit. There is a payoff when these details become important later on, but it can be a little bit to get through when you don't realize there's going to be a payoff.

Also noted is the ending... it's a cliffhanger, folks! That's not a bad thing (I could have read 200 more pages with these characters, and when the sequel comes out I certainly will) but it is a bit abrupt. Thankfully, most of the main plot points are resolved, so the cliffhanger plays more like a preview for the next novel rather than a major continuation of this one. But I find it important for anyone going into a novel to know if there's a cliffhanger ending, because some people care. Again, this plays of more like a strength than an annoyance. Plus, it helps that the seeds for the cliffhanger ending/sequel novel are placed throughout this novel, rather than "hey, look... I'm going to end it here so you can buy part 2". It's a natural extension. You know, like what a cliffhanger is supposed to be.

I'm a fan of vampires, and I do enjoy seeing some of the interpretations that are out there. The bottom line is I would highly recommend this novel to people who want a mix of things familiar, but told in an amazing way with some excellent writing, and world-building that never seems forced or phony. Check this novel out, you won't be sorry.


Posted by Bad Shakespeare at 5:00 AM