Who Ya Gonna Call? (Hint: Not the Internet) 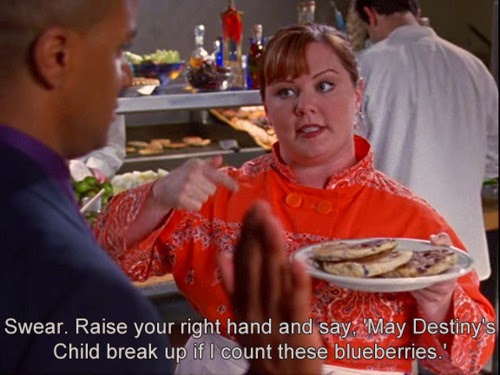 I took this news with a certain level of interest, because, as I’ve mentioned before, Ghostbusters was the first movie I remember seeing in the theaters with my father. (Yes… I’m old. We had to ride a dinosaur to get there and then ask a guy swinging his club around to leave.) It introduced me to Bill Murray, which is important - parents, talk to your kids about Bill Murray before they learn about him through Garfield - and it introduced me to the idea that movies don’t have to be serious all the time. Whenever it’s in the theaters because of a special or anniversary, I try to go see it, so, yeah, I love Ghostbusters.

So, I took the news that they were rebooting Ghostbusters with a bit of hesitation. I mean, it’s not only one of my favorites, it’s a classic. I have to admit, they have a pretty good cast, I love Melissa McCarthy (who’s the only one actually signed.. I’ll get to this point in a minute) and I love Kristen Wiig. I have to admit I’m not big on Saturday Night Live so I’m unfamiliar with the other two ladies who have been cast, but as long as they’re funny, I’m willing to give it a shot.

Then I made the biggest mistake in the world. I went online to see what else I could find out about it.

Apparently now it’s a hot-button topic. They movie itself is going to ruin childhoods everywhere, it’s stupid, and my personal favorite, if you hate it, then you hate women everywhere because women are starring in it.

So I figured I’d clear a few things up for everyone, because I think I reached my real limit with this particular movie, since I’ve been following the development of Ghostbusters for a while now, way back when it was Ghostbusters 3 and they were going to have to deftly write around Bill Murray being in it or not being in it.

Let’s start with the “ruining of childhoods”. They’re re-making Ghostbusters, ladies and gentlemen. RE-MAKING. This means that a new set of actors and a new set of writers are going to put on a show, presumably for a certain amount of money. That money is going to cover advertising, the actors salaries, catering…  stuff like that. What it’s not going to cover is buying all the rights to all the Ghostbuster Blu Rays and sending a gestapo-like team to destroy every copy, nor will it fund the conversion of several DeLoreans into Time Machines to go back and replace your precious Dan Akroyd-fueled Ghostbuster memories with that of Melissa McCarthy fueled hijinks. They’ll still exist, but a different version will be out.

It’s really starting to annoy me that the default for these remakes is a “Destroyed childhood” or “destroyed memories.” They’re not taking these memories away, they’re trying to create new ones for new kids… and let’s face it, just because something “new” comes along doesn’t mean what you enjoyed no longer exists. It still does. Bothers you? Don’t go watch it. Stay home. Put in the original Ghostbusters. Or Indiana Jones. Or GI Joe. Or Transformers. Boom. Mind=blown.

I also want to take a moment to the people out there that were commenting that they already know that this reboot is going to suck. As of right now they have the first draft of a script and really just the one confirmed star: Melissa McCarthy, who quite frankly should be part of any future Ghostbusters. When the announcement broke (those that chose to read the whole thing rather than the headline and burst into a fury of rage, like some nerdy Hulk who’s powers come from no one really knowing who they are.) will know that people are **close** to signing, which means they can change any minute. Hell, even when people are signed up, THAT can change. Colin Firth was the voice of Paddington Bear until six weeks before the movie came out. Things change.

This is another disturbing trend. Before a single frame is shot, people are declaring that once again, something is going to fail despite the fact that time and time again: they’re proven wrong. Right now, not a single piece of footage exists of Ghostbusters: The reboot. Not one special effect is out there. Right now it’s a star, first draft of a script, and a dream. Chill out. To be honest, I was much more worried by the mythical Ghostbusters 3 script that was constantly being changed. Although that one was rumored to have Jack Black attached, and that would have ruled.

Now, the final, more delicate piece of information… the feminist issue. Can we not turn everything into a culture war issue? I wrote all above about how people need to calm down about the upcoming movie that doesn’t exist yet, but people are turning this into a feminist issue and trying to say how everyone who dislikes the idea must somehow hate women. Let’s break it down for a second.

“I don’t want to see the new Ghostbusters because I loved the original and I don’t think this will be as good.” Probably means that they don’t want to see the new Ghostbusters because they loved the original, and they don’t think this one will be as good. Maybe they’re Ernie Hudson fans. Maybe they get confused with the new technology that makes ghosts look real. Who knows? Life is hard. Why read more into things than there needs to be? Don’t get mad at this guy.

“Women Ghostbusters? What if their boobs get in the way when they’re fighting ghosts? How will they hold the trap with them long fingernails” The person saying this probably doesn’t like women very much. Get mad at this person.

But no matter what, everyone needs to chill out about yet another Hollywood remake. I would have liked to have seen the original guys… as many as who were left… put on the packs one more time to bust some ghosts and possibly make up a little for Ghostbusters 2. Everyone remember Ghostbusters 2? Yeah… let’s be grateful we’re not getting that again. That being said, I’m kind of looking forward to what the next one has in store. Could be great. But then, if it’s not, I’m going pop in my copy of the old version, and hum along to the theme song for the 900th time.

Everyone… just relax.
Posted by Bad Shakespeare at 5:00 AM