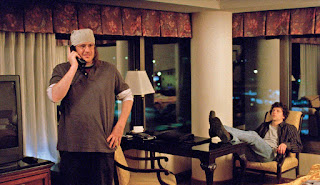 Biopics and true stories aren’t easy to pull off. Ultimately, some pieces end up missing, rearranged, or heroic characters end up being made cowardly villains who shoot at people trying to leave a sinking ship. (Thanks, James Cameron) So I always go into them with this in mind, trying to remind myself that what I’m seeing is an interpretation of a writer’s idea of what’s going on. In the end, all Biopics and True Stories and Memoirs and Autobiographies do have a sense of fiction in them.

I’m still not sure what to think of The End of the Tour, chronicling the conversations between David Lipsky (played by Jesse Eisenberg, decidely not playing a stoner spy) and David Foster Wallace (played by Jason Segel, who should probably start getting together his acceptance speeches for awards this season.)

Based on David Lipsky’s book, Of Course You End Up Becoming Yourself, the movie focuses on the conversations that the pair had as David  Foster Wallace was wrapping up his very first book tour following Infinite Jest. I’m not sure if anyone reading this has attempted Infinite Jest, but it’s not at easy read.

I’ve just described the movie twice and not really gotten beyond one sentence. That’s because on the surface, not much “happens” in this book. No Sharksplosions. No rapid gunfire. No epic love stories or quests or I’d even say grand revelations into either character. Lipsky comes across as a bit self-centered in the story, very much as our point of view character. Our first view of him is how he reacts to the news of Wallace’s death, and how it prompted him to pull out the tapes to write his own novel. Then it flashes back to his story: he gets a job at Rolling Stone and pitches the idea of doing a profile on this writer. Ron Livingston, perhaps apologizing for subjecting everyone to his role in Vacation earlier this summer, pops up to get angry that Lipsky isn’t working hard enough to find out the rumors of Wallace’s drug use.

This plot point doesn’t get much air time. It’s mentioned twice, and there’s no real mention of why it’s important. Wallace was a relatively unknown writer until Infinite Jest made him sort of a literary rock star, back before we started making some writers literary rock stars so long as they have access to a publicist and the ability to turn their books into movies. So, finding out that this relatively unknown writer who was just now becoming famous used drugs doesn’t seem like much of a point to keep coming back to.

But I have to say it was a good movie. I use that in one of the loosest terms possible. It’s the kind of movie that stuck with me, and is just sort of sitting in the back of my mind, even as I watch other movies with the aforementioned Sharksplosions and the man who is impervious to bullets because he has mastered the power of the high kick. The view of Wallace we get is unwaveringly Lipsky’s which is important. A lot of the point of the movie is that there are different ways we present ourselves, and we have to think about how we do that. Wallace was an interesting figure, who’s life was cut way too short.

There are a lot of thought pieces right now about how he would have liked this particular biography. The thing is, this is exactly what he would have wanted, I think. We’re not getting this as Lipsky saying everything was 100% accurate. What we’re getting is Lipsky’s interpretation of the character of David Foster Wallace, and that’s all the more important.

I’ve used this blog as a way of trying to figure out what I want to say before. I guess in some ways I’m still doing that a little bit: trying to figure out exactly what I want to say about this movie. It’s easy with a good movie or a bad movie. It’s difficult with a mediocre movie, but it’s not impossible. In this case, it’s just sort of... there. It’s one of two movies that I’ve seen this movie that I think I loved, but it’s hard to put into words. The only thing I really can say is to do what the movie asks you to do, and go see it. It’s an honest portrayal that doesn’t really spare anyone, and will have you wondering as you leave the theater.