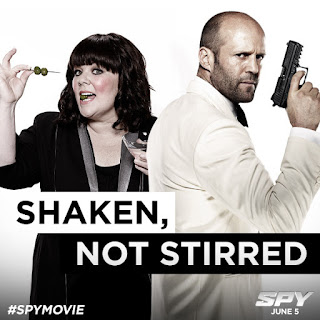 There really isn’t a shortage of parodies or attempts to reinvent the spy movie genre. From Johnny English to Spy Hard to some of the latter Pierce Brosnan James Bond Movies to even this year’s excellent Kingsman: The Secret Service, the Spy movie has been dissected and examined to the amount to the point that movies are either going to go super serious, like any of the Daniel Craig James Bond movies, or embracing the wackiness like the new Mission Impossible: Rogue Nation.

But there is an appeal to being a spy. Going undercover, cool gadgets, sweet moves, fighting secret agents. Which is probably why we get so many different variations of the spy. Which is a long way of saying Paul Feig’s spy movie Spy, starring future Ghostbuster Melissa McCarthy has a rich legacy to pull from, and thankfully, doesn’t squander it.

Quick note: Yes, I know this came out two months ago. It came out while I was busy taking Ireland. As a result, I had to catch up on some movies, this being one of them. I’m just now getting to this review. I’m not a professional critic. When I’m a professional critic, then I’ll go ahead and be more timely.

Spy is about Susan Cooper (Melissa McCarthy) who is a CIA Analyst and handler for handsome, James Bond-esque Agent Bradley Fine (Jude Law.) He does the heavy lifting, she runs things from her command center in Virginia. Things go awry when Fine first accidentally kills a man who knows where a nuclear bomb is hidden, then they go further awry when he ends up being killed himself during a mission. Believing herself to be the reason he died, she takes up the mission to find out where this nuclear bomb is being held. Can meek, Susan Cooper save the day? (Yes. The answer is yes. That’s pretty much the point of all of these movies: That the meek whoever will eventually find a way to save the day.)

The main problem with Spy is that it is never really sure about it’s tone. As a comedy, it’s pretty funny. As a Spy Movie, it’s not bad with the usual “Bad guy has the bomb” and “hey look at these gadgets.” Rather than a deconstruction of the spy genre such as Kingsman, this is more played as a spy movie with some funny moments, such as the increasingly ridiculous disguises that Susan is subjected. That tone can take away from some of the moments when used incorrectly, such as the menacing of Rose Byrne’s villain Rayna. One moment she’s menacing, the next she’s sort of bumbling and just an insult generator towards Susan.

The tone problem also takes away from the moments when the movie starts to get really good, particularly when Susan starts to show off just how competent she is as an agent. It was a smart decision as this could have been a really ugly fish out of water movie, when really it turns into a good message about believing in yourself and not letting people hold you back. The problems come when it’s not just enough that Susan kill a guy, but we have to show her vomiting on him as well because, why not we haven’t figured out just how far we’re going to take this. Or, as funny as the disguises are, why not have foot fungus cream be part of the disguise.

And it’s a shame, too, because it’s this tone issue that stops it from being truly great movie instead of a really good movie. None of my minor complaints should take away where this movie shines, and that’s the actors clearly having a good time. First is Jason Statham as Rick Ford, clearly playing a parody of himself as he ramps up the intensity to well over 11. I remember reading that one of the reasons that Leslie Nelson worked so well in Airplane was because he played his role completely straight, as if he actually was in a disaster movie. Jason Statham deserves the same accolades. He plays is role as a CIA Agent perfectly, clearly imported from another, much more serious movie. but he’s perfectly willing to take a pratfall if that’s what the script calls for.

Melissa McCarthy also does well, especially since the script doesn’t devolve into just her failing every few minutes. I like the fact that they establish that she’s a competent agent that just never took the right chances and ended up in the basement. I like the fact that she was still able to kick butt while at the same time making a sarcastic quip. It worked.

Plus the interplay between Ford and Cooper is simply amazing, and quite frankly I’d like to see the two of them make more movies together. I don’t know how likely that is to happen, rarely do their resumes intersect. And that’s a shame, because they really pull off something incredible here.

Overall, Spy is just a fun movie. Yeah, it’s not without it’s flaws. But it’s a nice little summer comedy/action/whatever it’s trying to be.